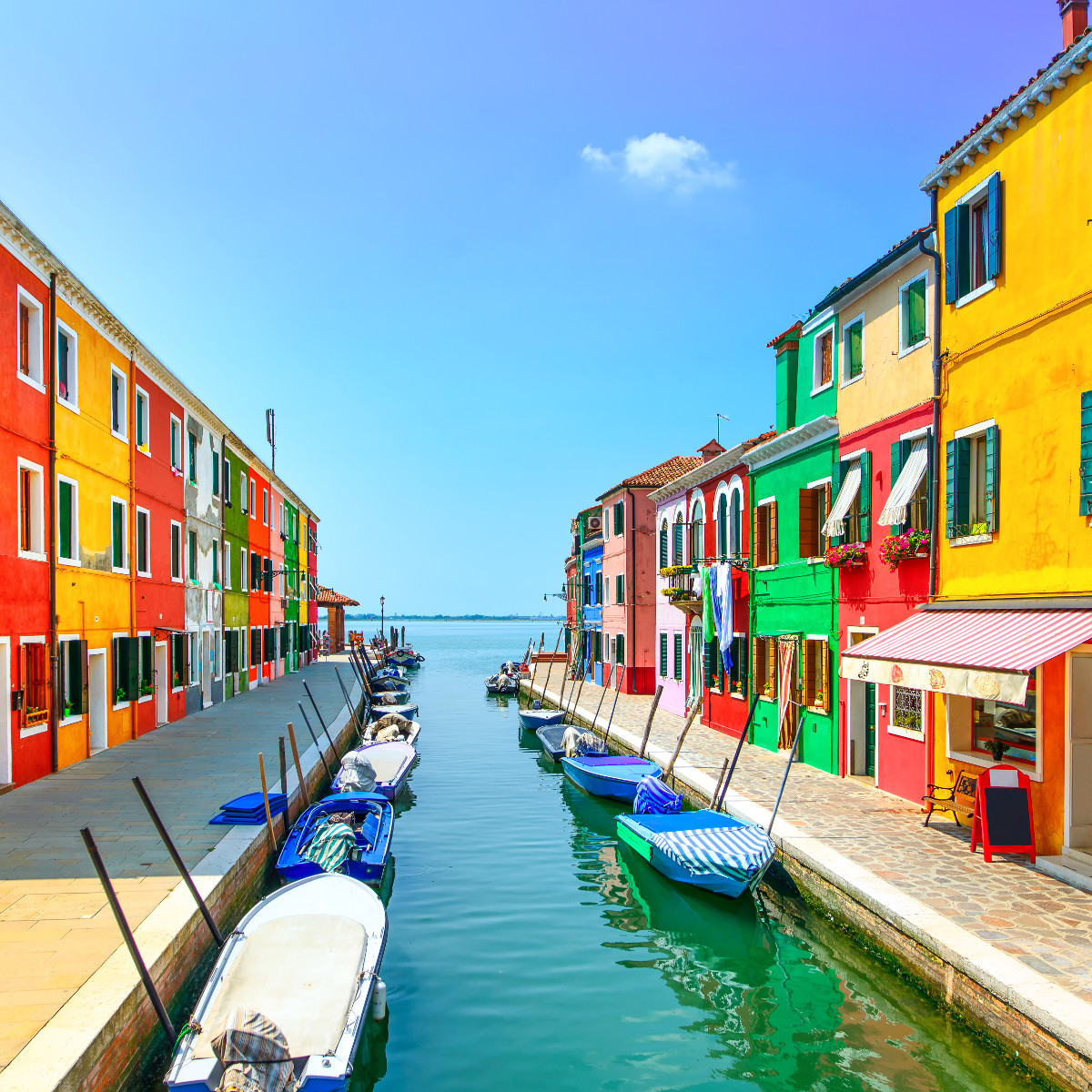 Visiting Venice feels like getting lost in a novel. An old one, with secrets and mysteries hidden within its yellow, brittle pages.

Intertwined with canals, Venice sets the scene for you to pretend cars don’t exist even in the neighboring town of Mestre, or anywhere in the world. You can be a count or a countess here and rise before the morning fog disperses. The romance is almost garish, but somehow manages to avoid that and feel so very authentic.

All that despite the obvious strain to keep this city firmly rooted in a time other cities have long since sailed by gladly, now filled with glass edifices scraping the sky and metro lines rumbling deep underneath them. Not Venice. It’s a wonder street lights aren’t operated with real fire and surprising whenever you come across a cell phone ringing somewhere, a little jolt reminding you that you are in the 21st century, after all. But you are bound to forget it again quickly, for Venice is an ancient city that looks like the inside of one of those ornate boxes you find at museums, a relic taken from the boudoir of a royal lady: all dark, plush velvet with peeling and faded romantic colors, like cornflower blue, gold, and vermilion. You can’t help but feel like someone else, or rather, yourself transported in time.

The best season to compliment this feeling is the winter, as will be discussed below, but Venice is a worthwhile experience at any time, and there is always something special to set one month apart from the other, so you can’t possibly pick the wrong month to come and see for yourself. Even the rule that says not to visit major cities in Italy during August finds its exception in Venice, as the last month of summer is the perhaps most important in the Venetian calendar.

This city bears a special place in the heart of the planet, and thus is graced with many events fit to celebrate such an anomaly: there are festivals and important occasions surrounding the arts, from cinema to painting via jazz: the Veneto Jazz festival, to name but one, takes place multiple times a year, with programs in the city of Venice as well as over the state of the Veneto. In case you’re having a hard time making sense of all this, we’ve broken things down by season to help you make the right decision. But as said, ultimately, any time is a lovely time when it comes to visiting Venice. Easter is quite a big deal, of course, but the main celebration of the season is St. Mark’s day on April 25. This beloved figure, whom you will recognize as the namesake of the most famous square in the city, is the patron saint of Venice and thus vitally important. Accident or not, the date has a doubly auspicious significance, as it was on this day in 1945 that Italy was liberated from Nazi occupation. The St. Mark’s revelry is followed by the Festa della Sensa, celebrated on Ascension Day with a regatta and the ceremony of marrying the city, each year anew, to the sea. Local folklore says that if it rains on this day, it will keep raining for the next forty. We don’t know about that, but it may be wise to pack a raincoat, just in case.

For sports fans, spring translates to the Vogalonga rowing race, a celebration of manual rowing, with a slight undertone of protest against engine-operated boats. Thousands of participants come from all over Italy and the world to compete in one of the most picturesque settings, which is worth witnessing even if you’re not one to row, row, row your boat. As mentioned above, the rule about avoiding major Italian cities in the summertime doesn’t really apply to Venice. That being said, we must warn you that in the city of canals, you have to contend with the water that snakes slowly through the town occasionally working up an odor that is everything but romantic. Coupled with the crowds, which are at their peak during summer, Venice can be quite the task to handle. But the warm months offer much more than just the cool waters at the Lido: every second summer, the ones that fall on odd-numbered years, the Biennale of Contemporary Art kicks off in June along with Art Night Venice, the name of which essentially makes further explanation unnecessary. The Biennale is the arguably most famous event celebrating contemporary art anywhere in the world.

As for religious holidays, without which there can pass no season in Italy, you’ve got the festivities to commemorate the end of the plague that swept the city in 1576, an event that has been celebrated every July since that year with what is called the Festa del Redentore. Held on the third Sunday of the month, there are fireworks and night markets, and a makeshift bridge is built to connect Giudecca to the main island so that the faithful may conclude their pilgrimage to the church that gave its name to the festival.

For an occasion much less pious and much more debauched, the illustrious Venice Film Festival starts in late August and goes on for eleven days, which means that a slew of celebrities descend on the small town, and since even they are forced to walk everywhere owing to the lack of limousines to ferry them around, this makes for fantastic celebrity spotting opportunities. The festival stretches into September and drives activity in Venice to a fever pitch. Another summer event revolving around film and reaching into the fall is the outdoor theater in the Campo San Polo showing recent movies in Italian with English subtitles, which is even more romantic than it already sounds. Venice being as fascinating and attractive as it means that it is one of the most crowded tourist spots in the world. The only shot you have at getting some peace and quiet to discover a Venice that the hordes of people in comfortable walking shoes might never see is in the fall. These months are a lovely time to visit, and not only because most people don’t come this time of year. Yes, it’s colder and rains rather often, but romantic, foggy and nearly empty Venice feels completely different and much more real, with no constantly clicking cameras or rows of selfie-sticks poking around your field of vision to distract you from your time travel.

This does not mean that the fall is without its fair share of important events: the Historical Regatta, for instance, takes place on the first Sunday of September, and the marvelous La Fenice theater kicks off its opera season.

The Venice marathon, held in October each year since 1986, is a classic running track that may be just the thing for you. It is unlike any other such event in that cars do not have to barred from the streets purposely. On even years, the Biennale of architecture runs from the end of May to the end of November, possibly to provide the townsfolk with a welcome change from the contemporary art and film crowd, and is just as big an event. With Carnevale, Winter is the most Venice time of all. But more on that later. First, consider the Regatta delle Befane on January 6, which was organized to please the witch who can best be described as the Italian counterpart to Santa Claus. Not just an event for children, parents should prepare for lots of candy and people in costume.

And now, for the equivalent fun for adults: February is the start of the always exciting Carnevale season, with the main event of the largest masquerade ball in the world taking place on Shrove Tuesday, the day before Ash Wednesday. While this occasion often technically falls in the spring, February is still filled with special events and people walking the dark, foggy streets decked out in incredible outfits. The dedication of the people of Venice is truly special. Even more so when you consider that the event was reintroduced quite recently, in 1979, after a long pause due to the wearing of masks being forbidden in 1797.

Around three million people come to the Carnevale each year. There are dances, shows, and even a contest for the most beautiful mask, judged by a panel of fashion and costume designers. Speaking of which, you can hire both a costume and a mask at numerous places throughout Venice, though the mask, at least, makes for a great souvenir to take home after, so investing in a gorgeous, handmade one to keep may be worth it.

December means Christmas, and Venice does the nativity scenes as well as any other city by the Adriatico. But December also means Hanukkah, a bigger deal in Venice, with the oldest Jewish ghetto in the world being located here, than it is elsewhere in the country. Cannaregio is lit up and filled with song and dance after the ceremonial lighting of the menorah.

New Year’s Eve in Venice may lack some of the excitement of Carnevale, but still brings fireworks, which it must be said look particularly great illuminating the city of canals for a series of bright moments in the Venetian night. Head to Piazza San Marco to participate in the deliciously gaudy tradition of kissing of your partner at the stroke of midnight along with thousands of other hopeless romantics in this city most suited to their sensibilities.

In conclusion, the choice of when to visit Venice comes down to your interests. If you’re a film buff of the arty type, summer is the time for you. If you want to have the quintessentially Venetian experience complete with masked figures lurking in the shadows, you’ve got to come in winter. But if you want to catch a glimpse of Venice quiet and solemn, before the show starts and the curtains part, fall is no doubt the best time to do so. Just know that the thing about Venice is that it’s not the kind of place you merely visit once. Come here to get a taste of the unique and unforgettable city of canals and know that you’ll be back, carnival or not.