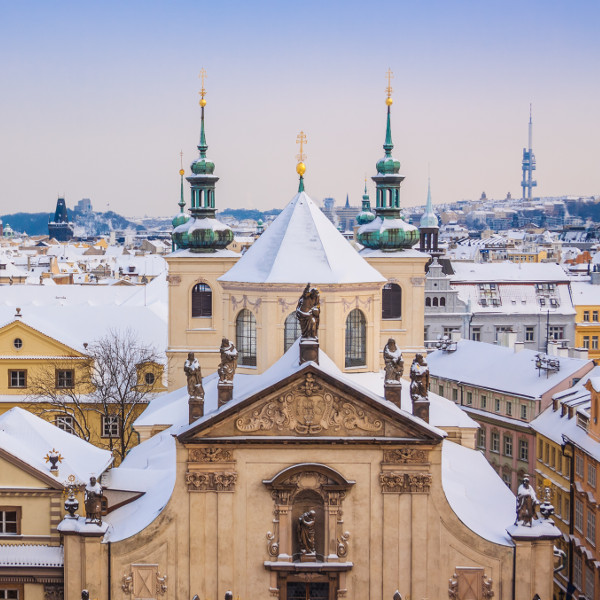 Prague is one of those cities without a wrong time to visit. Whenever you head to the Czech capital, rest assured you have picked the right dates. That said, certain perks go along with each season, such as amazing weather or specific festivals.

Speaking of weather, Prague sees four very distinct seasons and falls under something called a continental climate, which means that summers can get scorching hot and winters often bring very cold temperatures. However, neither should be a deterrent when visiting Prague, since the little city on the Vltava is enchanting in any weather.

Prague dresses in all kinds of flowers during spring, dons sunshine in the summer, puts on romantic earth tones in the fall, and wears snow oh-so-well in the wintertime. The city’s location also makes for great variation in daylight hours. This means that if you go in late spring or summer, you have the added benefit of long, languid days, while early sunsets in winter make for a very cozy atmosphere.

The main tourist season is in summer and fall, with Easter and Christmas bringing scores of holiday visitors to town as well. If you are looking to avoid the hordes of those descending upon Prague, the ideal time to schedule your visit is in the winter months after Christmas, even though the holiday season is a pity to pass up, what with all the Christmas markets and lights everywhere.

If the markets sound great, but the cold seems daunting, come around Easter time –  the holiday is a much bigger deal in the Czech Republic, and all of Eastern Europe, than it is elsewhere. So rest assured, there will be just as many street fairs and markets as there are around Christmas, minus the freezing temperatures. The Easter season starts two weeks ahead of the actual holiday and lasts for a week after, so you will be able to enjoy the bunny-themed festivities for quite some time.

The warmer months have festival after festival lined up – you will surely be able to find something to your liking whether you are a fan of theater, jazz, beer, or anything in between.

As you can imagine, the 18 acres of the castle district are best walked in early spring, and there is nothing like enjoying some of the best beer in the world on a warm summer’s day. You see, you really are spoiled for choice in this town. So, worry not, because any time you decide to come, this vibrant city of a hundred spires will be waiting for you with arms wide open. If you still need some help finding the right dates, here is a little guide for each season. The birds are back from their overseas holiday, flowers are in bloom, and the wind carries the scent of summer – the promise of which is sometimes even better than the actual season. Springtime can be magical in most any location; now imagine how lovely it must be in a picturesque city like Prague.

The end of March brings great weather to Prague, with the sun’s first rays already warming your skin with a thread of warmth in the still crisp breeze. April and May, in turn, are often warm enough for dinner on a terrace along the riverside.

A very Czech springtime festivity is the burning of the witches on the evening of April 30, something which may seem quite similar to Guy Fawkes Day in the United Kingdom but is the occasion to say goodbye to winter with a bonfire and the burning of a scarecrow made to resemble a witch. Local folklore holds that it is witches who have the power to keep winter around. The Czech heat up the last night of April in retaliation.

Labor Day celebrations commence on May 1, highlighted by a great parade.

The biggest holiday of spring – or, as some would argue, of the year –  is Easter, which is celebrated with incredible joy and enthusiasm. The occasion is taken seriously in the Czech Republic, and the importance of the resurrection of Christ to many people in this country simply cannot be overstated.

If you’re in town in May, one thing you must check out is the Khamoro festival, an occasion to honor the sizeable Romani population of Prague with a festival that is recognized worldwide. Held over five days in the month of May, Khamoro offers a unique opportunity to learn about Romani people, who form an essential part of Eastern Europe and have contributed an immeasurable amount to Eastern European identity, from language to cuisine to music.

Next on your itinerary should be the Prague Spring international music festival. Since 1946 when it began on the fiftieth anniversary of the founding of the Czech Philharmonic, this prestigious musical occasion draws massive crowds of classical music lovers to Prague each year. The festival commences on May 12, a date commemorating the death of Bedrich Smetana, a noted Czech composer.

The significant Prague Marathon is held in April or May each year.  A well-known fixture of the marathon circuit, it runs from the old town all the way up along one side of the river and down the other.

If you need any more convincing, consider that spring is an ideal time to travel to Europe, and the convenient location of the Czech capital can easily make it a fantastically romantic stopover on a train journey across the old continent, something worth doing once in your life. Like all cities divided by running water, Prague is glorious in the summer. Yes, there are drawbacks, of course. The city turns into a tourist stomping ground in the summer. You will have to deal with more expensive lodging, longer lines at museums, and less elbow room at the breweries. Plus, while summers in Prague can be mild and lush, they do occasionally get scorching – this landlocked nation can get mighty hot if the weather feels like it.

All this is peanuts when you put it up against the singular joy of staying out on the town late at night, going from pub to pub and enjoying pint after pint out in the open without ever needing to put on a jacket.

The riverside especially comes alive in the summer, with the crowds flocking to it to enjoy the cooling breeze around the water. If you are in town for the summer solstice, remember to watch the sunset from the gate of Charles bridge tower on the old town side. The reason you will want to do this is that when the sun sets on the longest day of the year and sinks from sight behind St. Vitus Cathedral, its last light illuminates the exact spot where the remains of the cathedral’s namesake lie buried. The sight alone is worth the wait.

For someone more internationally recognizable, let us look at Shakespeare. Though he may not have been Czech, the people of this nation love the king of both tragedy and comedy and celebrate him annually, all the way from June to September. Why don’t you catch one of the many plays staged during this time in honor of the greatest playwright to ever live?

The best reason to visit Prague in the summertime was, is, and always will be the beer. So pack your shorts and come here to get a few of those Pilsners. Even in high season, Prague is a great budget choice when compared to other European cities, most of which are expensive all year. Statistics relating to hotel prices show that the beginning of fall is the most expensive time to spend a night in Prague. This is because Prague, just like Paris, is famously gorgeous in the fall. Prague looks stunning in fall fashion with soft, diffuse light peeking through somber clouds, fog snaking through the streets, and the vivid, autumnal hues.

Fall is the best time to come if you are an avid photographer because those burnt reds, oranges, auburns, and yellows will give your photos that little something extra – pictures look so much better when the foliage plays along. Often, summer stretches into September, so if you’re looking to get the real fall feeling, come in October, when the season has had some time to settle in over the town.

A couple of music festivals take place this time of year. The Prague Autumn international music festival, a classical concert just like the one in spring, starts in mid-September and goes through the first day of October. There is also a jazz festival held at the end of October each year.

The most significant date in the fall is November 17, as it marks the beginning of the Velvet Revolution. A very important day in Czech calendars and hearts, this romantic name represents a turning point in the life of then Czechoslovakia, when, after over forty years of the communist regime, the system was overthrown – without the use of violence – and a free republic was formed in 1989. As a result of this, the dissolution of Czechoslovakia took place a few years later, in 1993, splitting the nation up into Slovakia and the Czech Republic.

One way to make a statement in memory of the Velvet Revolution is the jingling of keys, something which the people did during the demonstrations to signify the opening of doors. Today, many years after those ominous doors in question were finally opened, the people of the Czech Republic celebrate the day that started it all with pride and love for their nation. Come and see the joy they feel for being able to celebrate their freedom, something that was prohibited and entirely unthinkable not too long ago. The Christmas season is the highlight of wintertime in Prague, but the breweries are nice and toasty all through the cold months, so you will never really go wrong. The city is emptier in the winter, but this can be a plus or a minus. As in many other European countries, Saint Nicolas comes to town on December 25, but in Prague, he comes with the devil in tow. What happens to you on that day depends entirely on whether you have been naughty or nice.

One thing about Prague in the winter is that it can get bitterly cold, but you may not mind this too much after sipping on some piping hot mulled wine at one of the Christmas markets and following up it up with a “trdelnik” spit cake. Both are plentiful during the holiday season.

If you’re lucky, snow might even be falling, although this is far from guaranteed. New Year’s Eve in Prague is spent in the company of beer, of course, but so is virtually every other evening, so you can always feel festive on any ordinary Thursday. Then, on January 1, it isn’t just the new year that kicks off, but the Prague Winter festival.

If a Christmas away is not in the cards for you, plan your trip around the end of January, when you can head to Zizkov and enjoy the Czech version of a carnival, called a Masopust. You best wear a costume if you want to blend in with the crowds. If that sounds like a little too much fun, there is always St. Matthews fair. Starting at the end of February, this fair lasts until Easter weekend and has everything a proper good time needs, from roller coasters to those carnival games that are impossible to win.