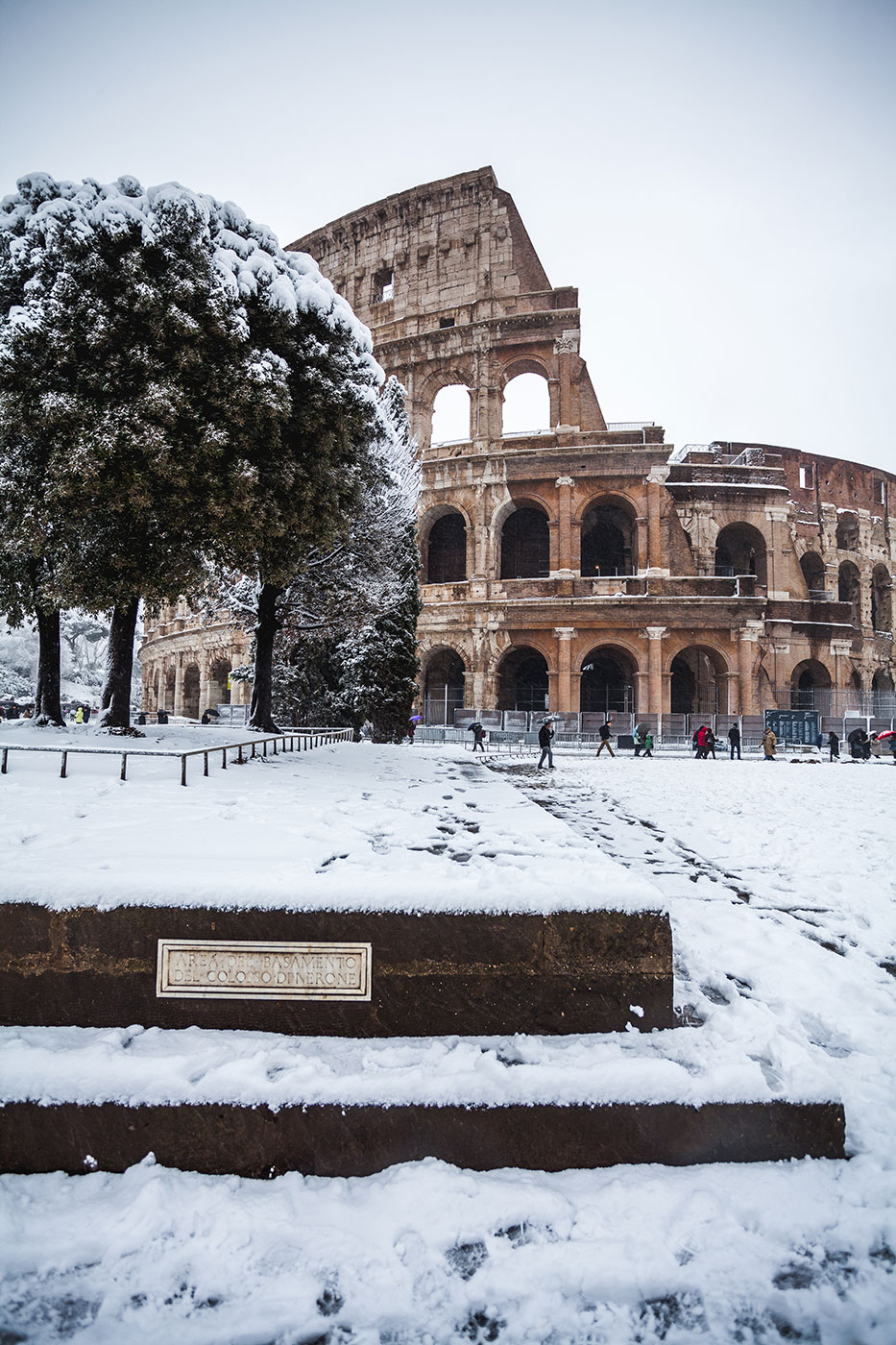 Rome is always great. But sometimes it’s even greater. When the best time to visit is depends largely on what you’re looking for. Are you the museum pilgrimage type? Go in winter. Do you want to have the quintessential Italian experience? Go in spring. Do you long to be surrounded by scores of your countrymen taking pictures and talking ad alta voce about their wonderful Roman Holiday? Go in summer. Now, some say the best time to go is when everyone goes – that is, after all, why they go – but there’s the camp who goes against the stream and goes when no one but the locals is in town. You decide. To make the deciding a little gentler on the mind, we’ve compiled a Roman calendar to show you what you can expect any given month of the year. Take a look and pick the one most to your liking, but always remember that the best time to visit Rome is really any time. 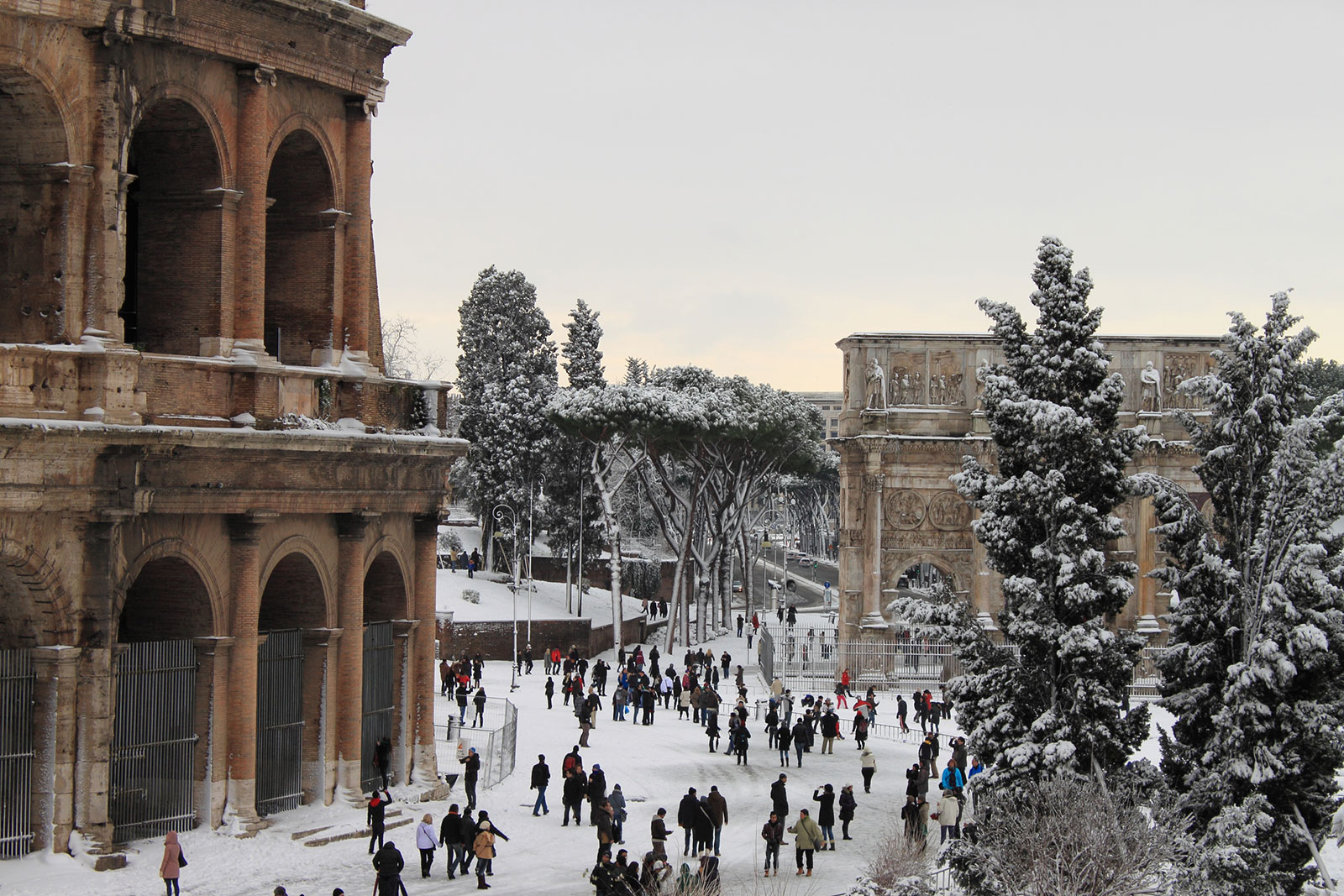 Winter in Rome may not be the best time for gelato, but with an average temperature of 50 degrees, the colder months are not all that restrictive. It may snow, but it is not very common. Even if it does, it hardly ever coats the city in white.

Not long after New Year’s Eve in Rome, the Italian answer to Santa Claus comes flying by in the shape of a witch, or Befana, as she is known, to bring children gifts on the eve of January 5. The next morning, you can join the procession towards Vatican City and blend into a crowd of hundreds of people wearing all manner of costumes, on their way to bring gifts to the pope who will greet them with a mass for Epiphany in Saint Peter's Basilica. For something a little more off-kilter, head to the church of Sant'Antonio Abate to partake in the celebrations held in honor of Saint Anthony, the patron of all things weird: gravediggers, butchers, and domestic animals. The way to show your gratitude is by attending the blessing of the beasts in Piazza Sant'Eusebio.

Winter is the best time to visit Rome if you want to avoid the crowds on your way through every museum and ancient ruin. Get up early on a January morning and enjoy the Trevi Fountain in solitude, as if it was there only for you. Head to the Sistine Chapel and turn around without having to step on other people’s toes in the process. If all this is not enough, know that you can expect cheaper rates at hotels, too.

February marks the beginning of Lent, a significant time in Roman life. Get here early to catch some of the pre-Lenten festivities, like the famous Carnevale or the religious processions beginning with Ash Wednesday. Piazza del Popolo is busy with carnival celebrations about ten days before the actual date, so you will have ample opportunity to put on a costume and join the fun. February is also a great time for shopping, as the post-Christmas sales are in full swing. People flock to the capital city to get a good deal on virtually anything, and so should you. Rates might be higher around Valentine’s day.

Rome breathes a blooming sigh of relief in March as spring is finally on its way: come this time of year to catch some of the best weather in Europe.

Women’s Day, held on March 8, often comes with public transport strikes and things of that nature. However, restaurants in Rome typically have special Women's Day menus.

On March 14, or the Ides of March, Roman's mark the anniversary of Julius Caesar's death in the Forum Romanum.

Easter, in March or April, is one of the busiest times of the year in the Italian capital. The events culminate with an Easter Mass in St. Peter's Square.

For the runners, March is when the annual Maratona di Roma, a famous marathon, takes place. Lace up your sneakers and run the course that takes you past some of the ancient city's most famous monuments.

Rome is one of the most visited cities in the world, so it will never be quite as empty as any given tourist dream would have it, but March is a great month to go if you want fewer crowds but don’t feel like wearing a coat. 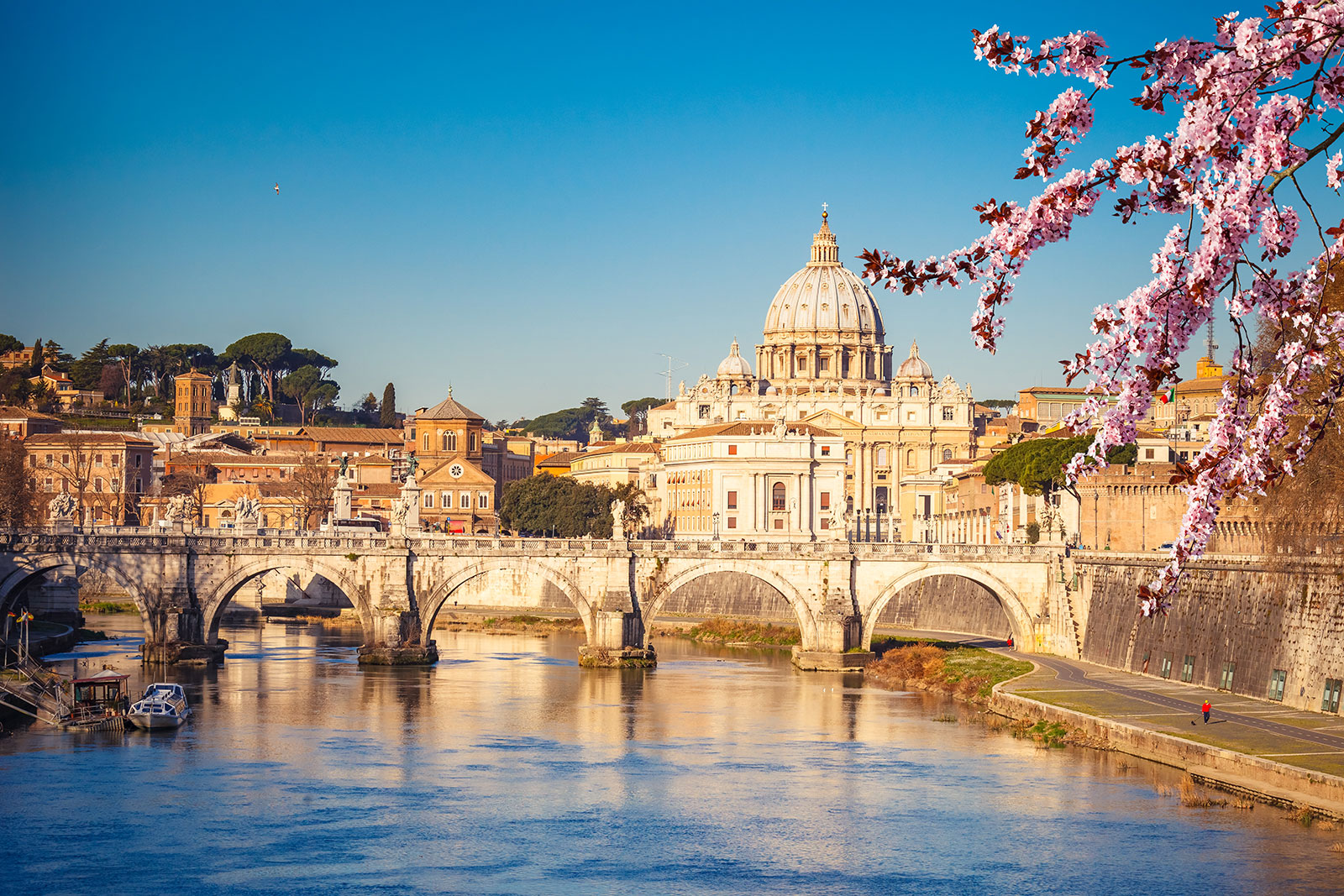 April is a busy month around Rome. The day after Easter, La Pasquetta is a big day in the Roman calendar. Locals typically celebrate with day trips or picnics out of town, and then come back to see the fireworks over the Tiber river.

The Festa della Primavera, a festival dedicated to the first day of spring, dresses the Spanish Steps in a sea of pink azaleas.

Mid-April brings with it the Settimana della Cultura, or week of culture. This means that national museums and archaeological sites are free to visit and some places not usually open to the public can be visited, too.

The founding of Rome is celebrated on April 21 with scores of special events. The eternal city is said to have been founded by the twins Romulus and Remus – the ones nursed by a wolf in the famous statue The Capitoline Wolf – somewhere around 753 B.C.

April 25 is Liberation Day, the day Italy was liberated at the end of World War II. Commemorative ceremonies are held around town as a city remembers the joy of liberty.

Spring, particularly mid-March and April, save for Easter week, is a great time to see the sights of Rome. Temperatures tend to be comfortably warm, and crowds will not reach their peak for a little while still.

This is the start of high season, with the temperatures climbing steadily upward and the crowds descending upon Rome. Get ready for the song and dance of long lines alongside hordes of tourists. The upside is that the days are long.

May 1 is a national holiday in Italy, marking Labor Day, the celebration of work. There's a concert in Piazza San Giovanni, and protest rallies and strikes abound as well. Most sites and museums are closed on this day.

On May 6, a new group of Swiss Guards is sworn in at the Vatican. This ceremony is not open to the public, but if you manage to reserve a guided tour of the Vatican on that day, you may catch a glimpse of the men.

June boasts a lovely temperature steadily in the 80s. The great weather and the start of school holidays makes this a busy time to visit Rome.

June 2 is the Republic Day or Festa della Repubblica, which commemorates the day in 1946 that Italy became a Republic. An impressive parade is held on the Via dei Fori Imperiali followed by music in the Quirinale Gardens.

June is packed with religious festivities such as Corpus Domini, two months after Easter Sunday, the Feast of San Giovanni on June 23, and Saints Peter and Paul Day on June 29.

The Lungo il Tevere festival starts in June and lasts until September. 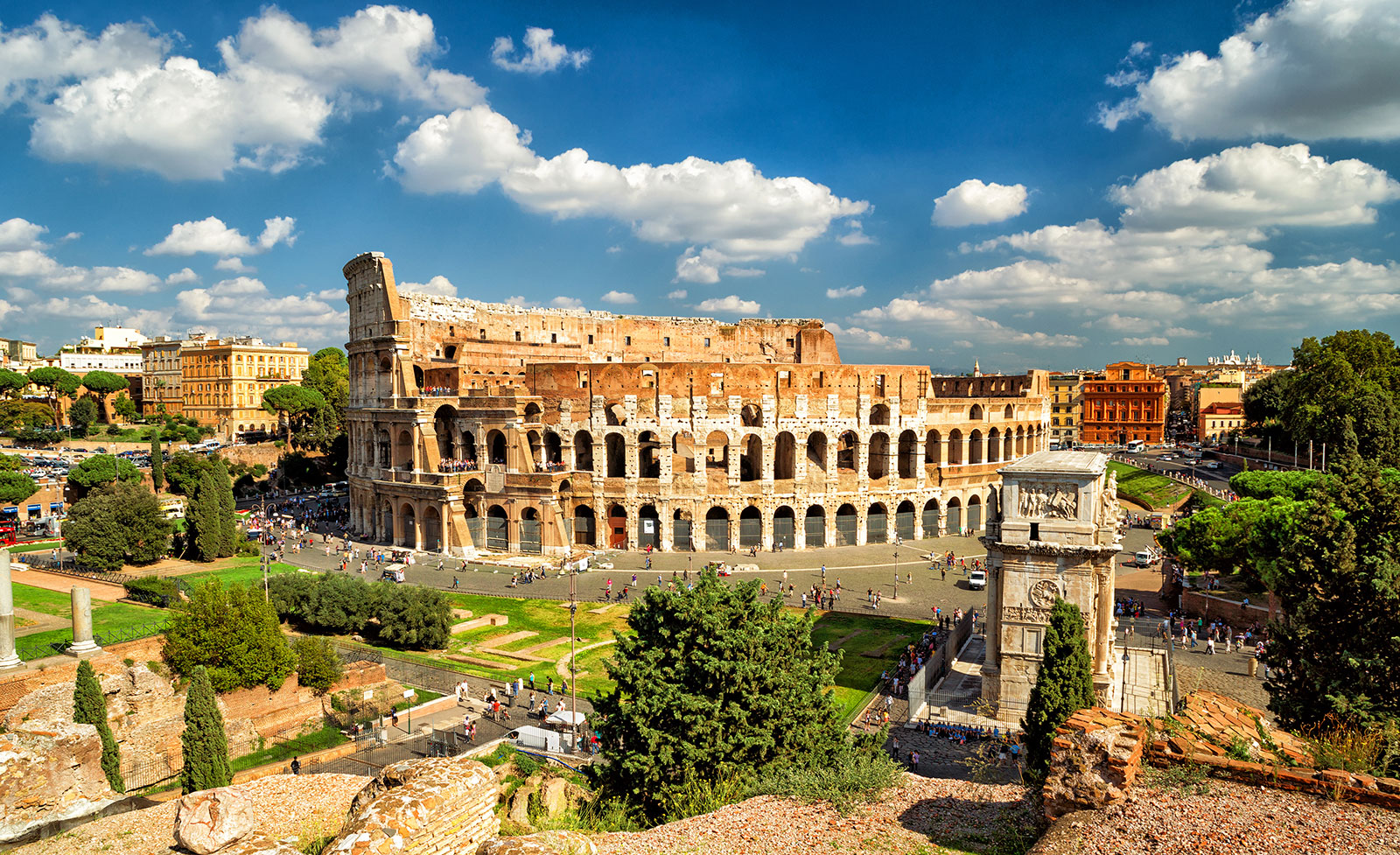 July is the hottest month in Rome with temperatures rising to 100 degrees. The heat is intense, and so are the crowds, but there are things you can do to cool down. The Expo Tevere arts and crafts fair awaits you on the riverbanks with stall upon stall of delicacy, handcrafts, and all types of things that make ideal souvenirs. Instead of getting the Rome snow-globe at the airport for the forgotten aunt, drop by here and leave with much more than you intended to buy.

The festival du jour is La Festa dei Noantri, which is Roman slang for something like “the festival for the rest of us.” This somehow means that Saint Mary in statue form is adorned in the finest handmade clothing this city has to offer and carted from church to church in Trastevere, accompanied by her dedicated adorers, music, and a good helping of Italian dolcezza.

All in all, this time of year is difficult to manage for the rookie traveler, and rates are astronomical. There is only one worse month to visit the Italian capital, and that is August.

Never visit Rome in August. Follow the lead of the Italians who flee town at the beginning of the month.

Everything that isn’t closed – like all good places will be – costs about twice as much as it does a few weeks down the line. If you do end up visiting this time of year, you can head to the spas or nearby beaches.

Celebrate The Festa della Madonna della Neve or Madonna of the Snow on August 5, a festival which marks the day that snow supposedly fell. There’s artificial snow on offer and a light show to keep your mind off the heat.

Early September marks the harvest festival Sagra dell'Uva. It is a celebration honoring the universally beloved grape, and it is held at the Forum.

September is football season in Rome. Try and score some good tickets to a Lazio game on Sunday.

There are also numerous arts, crafts and antique fairs across the city.

October in Rome is the month of performance. Music aficionados will know that Rome is the site of a very famous jazz festival. Get tickets early to see some of the greats perform at the Parco della Musica.

Join the Feast of St. Francis of Assisi on the third day of the month and lay a wreath at the Basilica di San Giovanni.

Fall in Rome is a gorgeous time that could give Paris a run for its money. It is cool but not cold, and the many famous parks around the city shine in their most colorful dress. Take a walk in Borghese Park and have a nice glass of regional red.

Toward the end of the month, most attractions in the city go on a sort of low simmer and aren’t open as long. 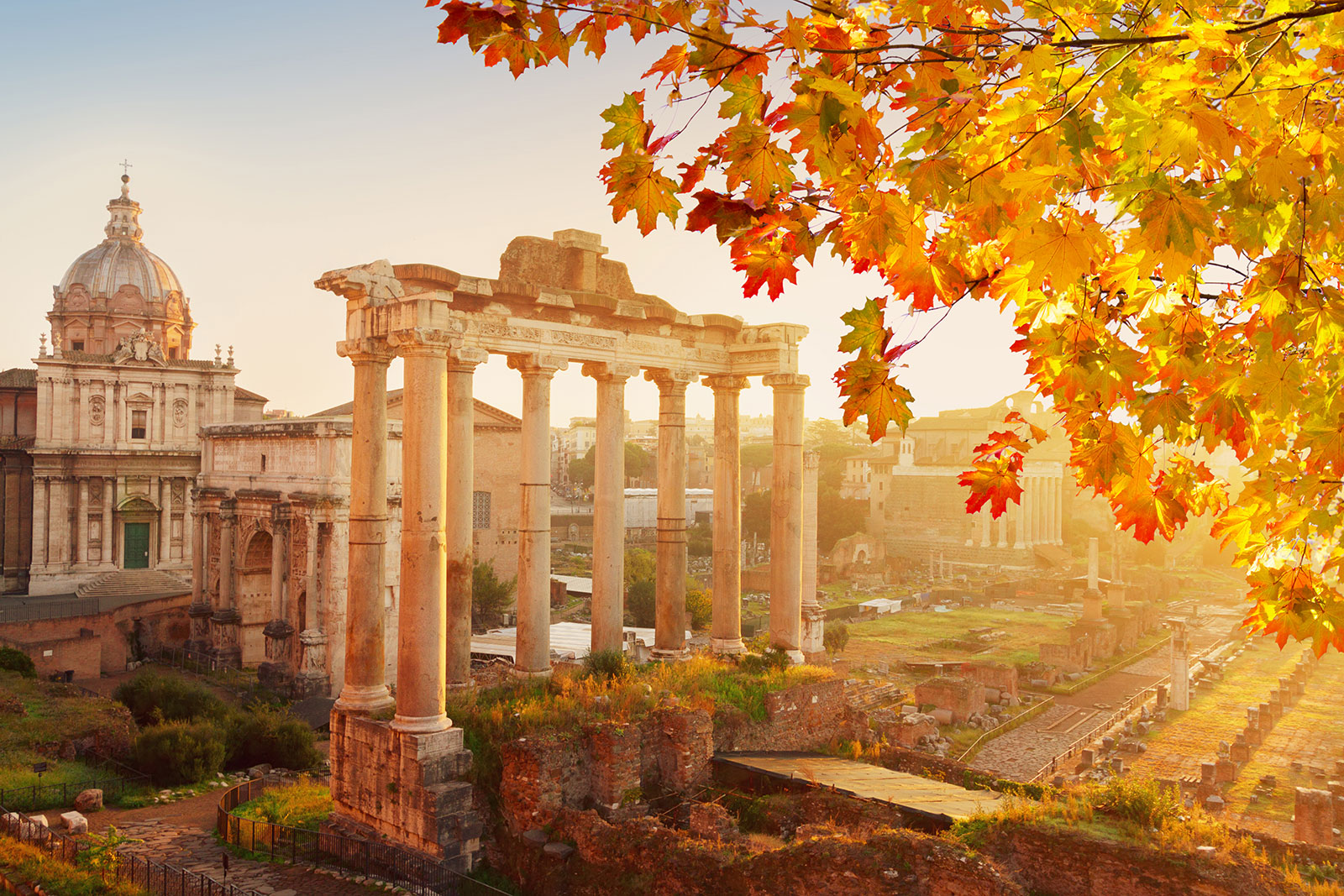 November gets a bit chillier, with temperatures dropping to around 50 degrees. The first day of the month is All Saints, or the day of the dead, as it is virtually everywhere else in the Western hemisphere. Italians remember their deceased on this day by visiting graves and cemeteries.

This is also the month of the Roma Europa Festival. Catch a performance of contemporary Italian theater, dance, or film. For more cinema, be sure to attend the International Rome Film Festival.

Winter is a fabulous time to visit the Vatican, a lot less crowded this time of year, except of course during Christmas time. Don’t plan your visit on a Sunday, though, or if you do, make it the last one of the month, as the museums are shut on all other days of rest. The good news is that on the last Sunday, your visit is free, the bad news being that it can be crowded.

Hanukkah is an essential holiday for Romans. Head to Piazza Barberini to admire the sea of candles surrounding the giant menorah lit there every evening.

There’s nowhere like Rome when it comes to celebrating the birth of Jesus. Visit one of the many markets to sample traditional Christmas foods, look at beautiful handcrafted nativity scenes, and feel the holiday spirit. Christmas Eve is when the nativity scenes are unveiled and completed through the addition of the baby Jesus.

Whether you are Christian or not, the midnight mass at St. Peter’s Basilica is the experience of a lifetime. If you are in town for New Year's Eve, take a stroll down to Piazza del Popolo and watch the pandemonium unfold as Romans gear up for a new year.