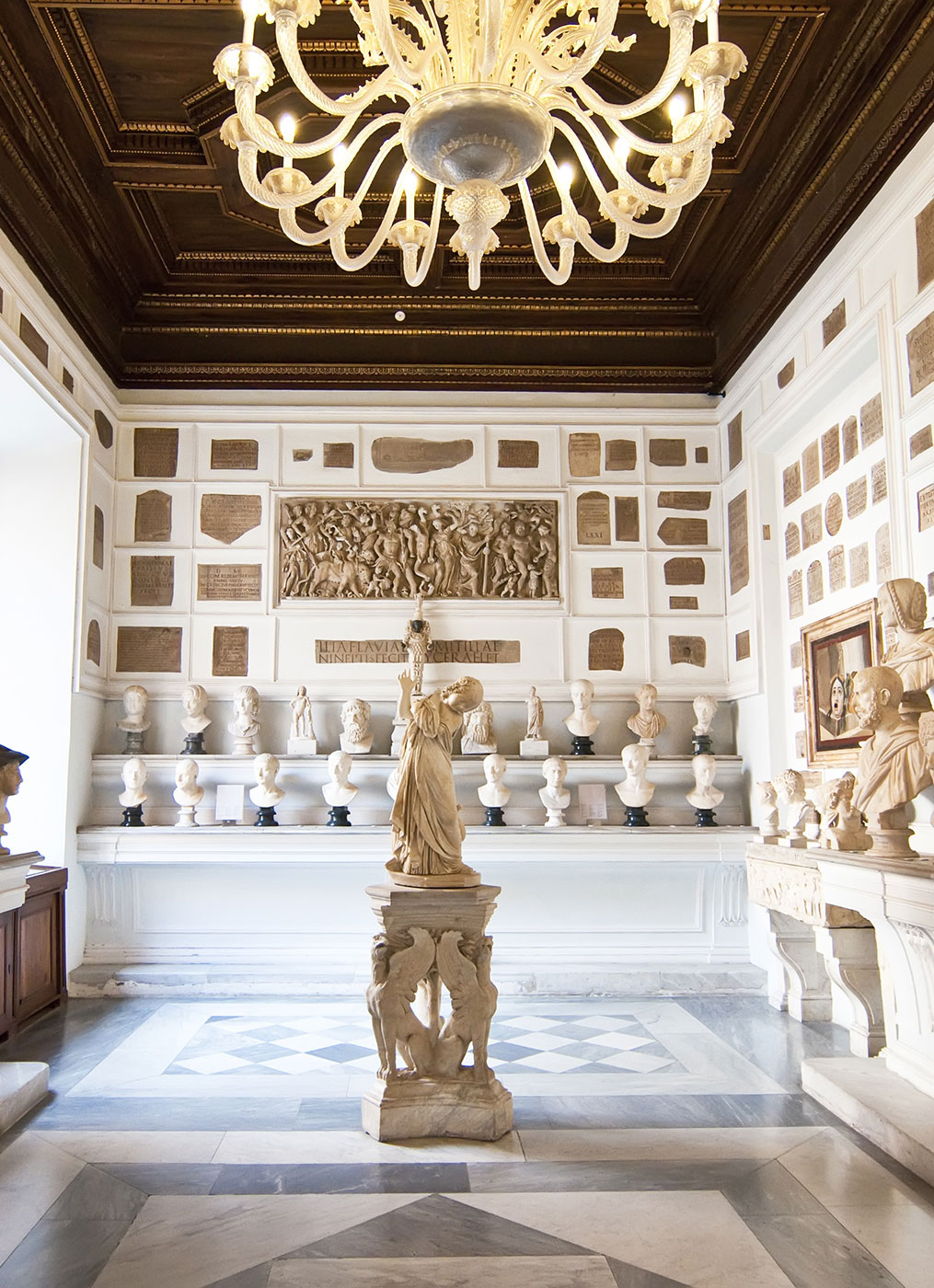 The Roman empire was one of history’s most prolific producers of art, so it should come as no surprise that the Roman capital has some of today’s best museums. In fact, you’d have to spend a few lifetimes to see everything the city has up its sleeve.

Here are the Roman museums you simply must visit once in your life:

1. The Vatican Museum and the Sistine Chapel Head to the Vatican Museum and Sistine Chapel to see all the art the guidebooks urge you to. This enormous museum is one of the largest in the world and houses around 70,000 works, with 640 employees in 40 different departments looking after all the precious art. On the last Sunday of each month, the Vatican Museum is open to the public for free, but this obviously means much, much longer queuing times than usual, which isn’t a brief wait to begin with. The Sistine Chapel, with its ceiling decorated by Michelangelo, is at the end of the visitor route through the Vatican Museums. There are 54 galleries in total, with the best being saved for last. See God reaching down to Adam on the ceiling and ponder over God being embedded into the shape of a brain – perhaps by accident – by Michelangelo. Other notable paintings in the Vatican museum include Giotto di Bondone, the Stefaneschi Triptych, and the Raphael Transfiguration. As you make your way through, you can also admire the red marble papal throne and the gallery of maps, the world's largest pictorial geographical study. In the ‘70s, a collection of Modern Religious Art was added which feature paintings and sculptures by the likes of Vincent van Gogh, Paul Gauguin, Marc Chagall, Salvador Dalí, and Pablo Picasso.

This museum complex is perched at the top of Capitoline Hill. It was planned by Michelangelo and took more than 400 years to finish. In the year 1471, Pope Sixtus IV donated a sizeable collection of ancient bronzes to the Roman people, starting what was to become the first museum in the world. Now expanded to include everything from jewels through statues to Renaissance paintings, the musei capitolini have, to this day, remained a place where anyone can come and enjoy art to their heart’s desire, no matter their status.

The collection includes The Capitoline Wolf, which is a bronze sculpture portraying a she-wolf nursing Romulus and Remus – the twin brothers whose story tells of the founding of Rome. You may recognize it as the cover of your high school history book. This collection is great if you’d like to learn more about the relationship between ancient Greek and Roman cultures, as the collection includes a large number of emblematic works from both. Pay a visit to Leda and the Swan, a gorgeous evocative statue depicting the tale of Zeus seducing Leda in the form of a swan. Be sure to also see Bernini’s Medusa, the Greek goddess with living venomous snakes in place of her hair. Legend has it that she caused people who cast their eyes on her to turn to stone.

Much like a scrumptious plate of spaghetti, the Pasta Museum is worth every minute of your time. This museum shows you where pasta comes from, how it is supposed to be made, what it is supposed to be eaten with, and why it is the most delicious thing humanity has ever come up with. Full disclosure: pasta in Italian means noodles as well as “dough”, and this museum talks about pasta in all its iterations and pasta as a concept as well as a source of joy. This museum will no doubt satisfy your craving for pasta related knowledge.

What unites Ben-Hur, Cleopatra, and La Dolce Vita? As any film buff that’s worth his or her salt will know, it’s Cinecitta studios. The largest film production facility Europe has to offer, it makes Hollywood look like a tumble-weed in the California desert. Founded by Mussolini, Cinecitta is a film studio unlike any other.

People with names like Fellini, Visconti, Leone, or Coppola held the door open for each other, figuratively as well as sometimes literally. More than 3,000 movies have been filmed there, of which 90 received Academy Award nominations and 47 got one. It was Cinecitta that helped Rome become "Hollywood on the Tiber." The movie-themed amusement park Cinecitta World is located about 20 minutes southwest of these studios and is also worth checking out.

Go with the guided tour to really get the best of this place. Make this your last stop before leaving Rome as it is on the road to the airports of the Italian capital. Stepping into the Galleria Borghese, it is immediately clear that this important Italian family had it good. Really good. Cardinal Scipione Borghese, the nephew of Pope Paul V was a patron to the great Bernini, whose fingerprints are all over town and this gallery. But the museum also houses a sizeable collection of Caravaggio paintings, such as his Boy with a Basket of Fruit, St Jerome Writing, and the painfully beautiful Sick Bacchus. Other paintings at the Galleria include Titian's Sacred and Profane Love, Raphael's Entombment of Christ, the strange and beguiling Lady with a Unicorn by Raphael, and the cheeky Venus blindfolding Cupid by Titian. Visit one of the richest, most breath-taking collections of art in the world and take a walk in the marvellous Borghese gardens once you’re done.

The Cripta Balbi is a secret tip – this is the place to visit if you want to feel like a local coming to appreciate a hidden part of his or her city. And hidden it is: a part of the Antico Teatro di Balbo, these crypts were discovered during excavations made in the area. Check out artifacts from the antiquity through the middle ages upstairs to find out how the other half lived way back in the day and then head down to the basement to walk around in what used to be a Roman theater. Built somewhere around 13 B.C., these dark passageways offer a glimpse into the past somewhat like Pompeii does, so Cripta Balbi is a great choice if you can’t squeeze the city by the Vesuvio into your trip to Italy. Another great perk of this place is that you can use your Rome National Museum ticket to enter.

This museum shows the private collection of Count Giuseppe Primoli, the great-grandson of Lucien Bonaparte. The count spent a lot of time in Paris at the court of Napoleon III, and moved back to Rome after the fall of the empire. Once he settled back in, he started the collection you can see here today: ten rooms filled with art, precious jewels and household items show a side to the imperial family you do not see elsewhere. You may find that if you strip down the glitz and glamour, they were not all that different from your family. See if you can recognize anyone in the extensive collection of portraits or find the snuffbox belonging to Louis XVIII.

Once a power plant, this museum is famous for its art as much as it is for its technology. Hundreds of Greek and Roman statues standing tall in front of a backdrop of industrial architecture is quite the sight to see. Most of the art here stems from excavations started after the unification of Italy, when all antique gardens of Rome were dug up to see what could be found there. A whole lot, as it turns out: busts and full representations of Greek gods, Roman emperors, and Cleopatra await you at this eclectic, strange place. There’s something for everyone here. The machines of this old plant are all originals, brushed and greased into shape, and anyone with even a rudimentary interest in technology will find it interesting to see such old machinery kept in pristine condition.

For art from the nineteenth and twentieth century, look no further than the national gallery of modern art, the largest such collection in the country. The building was designed by Cesare Bazzani, completed in 1915, and is imposing to say the least. Lucio Fontana, the enfant terrible of the Italian art world is in good company here among peers like Giacomo Balla, Umberto Boccioni, Alberto Burri, Antonio Canova, and Amedeo Modigliani. There’s a smattering of works by foreign artists among the 4,000 or so paintings on show here, so that you can enjoy works by people like Cézanne, Duchamp, Kandinsky, Mondrian, Monet, Jackson Pollock, Rodin, and Van Gogh as well. The latter is represented by two of his works, his Portrait of a Young Peasant and L’Arlesienne. The building that houses this museum was designed by Dame Zaha Hadid, the illustrious Anglo-Iraqui architect. Her touch is visible in every corner of the 27,000-square-meter edifice and fits perfectly the subject matter this collection aims to deal with. If you’ve had enough of the doubtless incredible statues and paintings of the old masters, head to Flaminio to these old military barracks to get some impressions of the new school. You’ll find everything from the celebrated Indian artist Anish Kapoor to the private collection of Claudia Gian Ferrari. If this is not enough of today for you, check out pieces by greats like Tracy Emin or Rachel Whiteread at the Galleria Lorcan O’Neill in via degli Orti Alberi.

It is useful to remember that Roman art is not all about museums. Free to look at are the adorable Elephant and Obelisk, the magnificent Trevi fountain, the Moses, and a bevy of Caravaggio works around churches in town. Some so unassuming that they are only visited by Italian locals.

A lot of the city’s best art is in churches, which are first and foremost places of worship, and thus are usually free of charge. Drop by the Santa Maria in Trastevere (piazza Santa Maria in Trastevere), also known as The Basilica of Our Lady. This is one of the oldest churches in the city, dating back to 340 A.D. It is the first church in Rome dedicated to Mary. The ceiling is painted by baroque master Domenichino.

Sant’Ignazio church (via del Caravita, 8a) was constructed between 1626 and 1650 and is dedicated to Ignatius of Loyola, who is known for being the founder of the Jesuits – an order of which Pope Francis is a member. Come here to admire Andrea Pozzo’s trompe l’oeil – an optical illusion – painted on the ceiling which depicts Loyola soaring towards heaven. Stand on the disc that marks the spot for an ideal viewing experience and be prepared to feel much more than any 3D movie can make you.