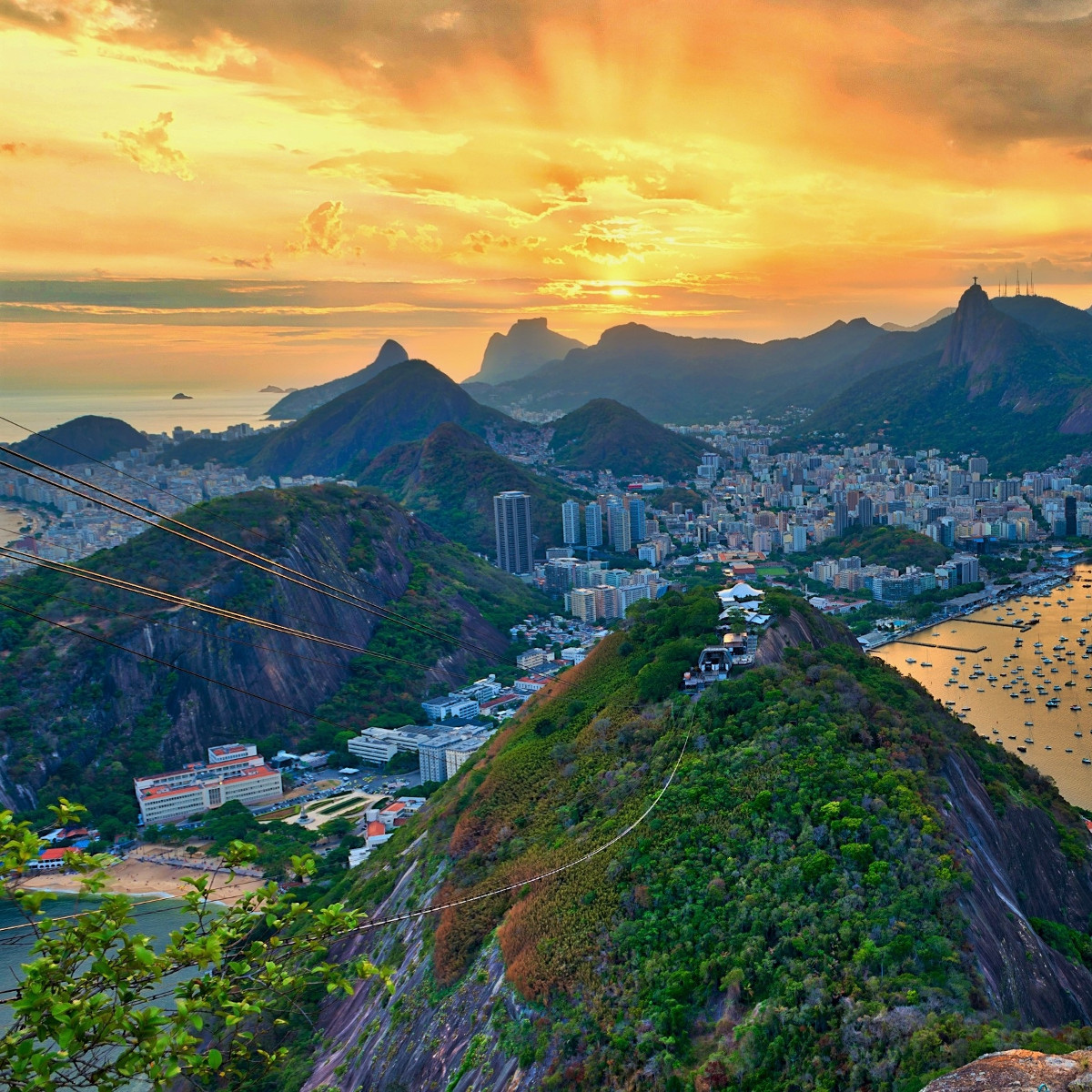 Rio is known as The Cidade Maravilhosa, or “marvelous city,” and for a good reason, as it blends breath-taking nature with South American and Portuguese culture to create one of the most photogenic cityscapes in the world. The second biggest city in Brazil – after massive Sao Paolo – has everything you would need if you were trying to make a paradise. Locals say that on the eighth day, God created Rio. Tall and tan and young and lovely, the girl from Ipanema will be waiting on this most famous beach. Every flicker of light entering your lens is the picture of a lifetime at Ipanema beach. While this beach is gorgeous, everyone knows it – the crowds here are dense, and the drinks are decidedly expensive.

This beach is known for its wavy pattern of black and white tiles that hem the soft white sand. It is longer and more crowded than Ipanema. Which, if you’re looking to get some pictures of city life, may be the better option. These two world-famous beaches are side by side, so you can certainly do both, and since the jury is still out on which has the better views, you can decide for yourself. Say what you will about Ipanema, but music and passion are always in fashion at the Copa.

Hemmed by the sea, the Tijuca forest is known for its incredible biodiversity which means that you can, with a bit of luck, snap a picture or two of the exotic residents at this lush, overgrown forest. You can hike Pedra Bonita, or beautiful rock, in about forty minutes with relative ease, and any exertion spent is certainly worth it once you see the view from the top. You will take the best pictures if you make it by sunrise. Pedra de Gaeva, the peak right next to Pedra Bonita, is one of the highest mountains rising directly from the sea. You can hike Pedra Bonita, too, though the trek is much steeper and more challenging, and you must bring a guide. If you’re not in the hiking mood, head to Parque Lage and visit the erstwhile residence of industrialist Enrique Lage and his wife, the famous singer Gabriella Besanzoni. Words don’t do the mansion justice, which is why you should head there to take some pictures to show people instead. Named like this because of its resemblance to a heap of brown cane sugar, with its rounded, wide peak and a cable car that takes you up to the top, Sugar Loaf Mountain is both a wonderful subject for photos and a great spot from which to take pictures. The quartz and granite monolith sitting calmly in the sea is one of the most important marks of the city, and the people of Rio justly feel very affectionately toward it, as you most certainly will as well. Ride up with the cable car at sunset and thank us later.

An avenue lined with tall palm trees leads to the botanical gardens of Rio, located in a district of the same name. These gardens are home to over 6,500 distinct species of plants, flowers, and trees, all of which make for wonderful photographic material. The Jardim Botanico puts on an incredible show of what nature is capable of, and you can find statues throughout the property if your eye longs for a human-made distraction from the lilypads, palms, and cacti at this 140-hectare park, one of the finest of its kind anywhere in the world.

While the name translates to red beach, Praia Vermelha is all about the blue: that of the water, of course. Deep blue, calm waters shine like lapis lazuli at this tranquil, small beach. The reason it is called the red beach, you should know, is that the sunset dresses this bit of Rio up in the most dramatic crimson at the close of every day. So, you’ve got your reason to come here at dusk, but even in the daytime, seeing the Sugar Loaf mountain from its other side is well worth the abject suffering you will have to endure sipping on coconut water with your toes in the sand.

The two brothers, as this hill is called, watch over the city of Rio with one body and two heads. The two peaks can be reached through an easy hike, and the views from here are uniquely wonderful, opening the entire south side of Rio. While this list has no shortage of postcard motifs, two brothers hill comes with the unique opportunity to get a picture of the marvelous bay that others may not bother hiking. So, get that photo printed and stick a couple of stamps on the back to make the folks back home reach for their smelling salts. The biggest art deco statue in the world, Cristo Redentor is a symbol of Rio de Janeiro. This is the second largest statue of Jesus in the world, being bested by a comparatively obscure one somewhere in Poland. Seen from countless parts of the city, the Redeemer, like the Sugar Loaf mountain, deserves to be photographed from afar and up close. So take the train through the park and then ride the elevator up Corcovado mountain and, whatever you do, don’t forget your camera. Alternatively, if you a closeup, you can climb the 220 steps to his feet.

The Niteroi Contemporary Art Museum looks like it is a fever dream of Stanley Kubrick, with its futuristic lines resembling that of an extraterrestrial spaceship landed on a peak jutting from the coast of Rio. While it looks like a building from the Jetson’s, meaning it resembles a version of the future as people in the 80’s imagined it would look, it was actually finished in 1996. This massive museum is wonderful from the inside, but nothing beats a picture of the edifice from the beach below it.

This library of over 350,000 volumes is the largest Portuguese bibliotheca outside of Portugal. However, you don’t have to speak the language to come here; you can let the pictures speak for themselves. A tour de force of Gothic and Renaissance architecture, this building is beautiful inside and out thanks in no small part to a stunning, stained glass ceiling.

Opinions are divided on this part Mayan temple part modernist abstraction. Construction started in 1964, which might explain the funky sci-fi look of this church. The massive cathedral has standing room for 20,000 people, and the interior is certainly as impactful as the exterior, with four segments of floor-to-ceiling technicolor stained glass adorning the otherwise honeycomb-like minimalist walls, culminating in a cross of four even sides on the ceiling. There is absolutely nothing ordinary about this place of worship, and as such, it would certainly inspire regret in the heart of the photographer who skipped it. If the modernist church above is a bit too far off-kilter for you, you can come to the Mosteiro de Sao Bento instead, although if subtle is what you aim for, you’re not much better served with this one. However, sometimes, as in life so in photography – and certainly in churches – more is more: this particular one is a tour de force of ornate, awe-inspiring craftsmanship. Dark, carved wood all over the inside of this church make for a rather sinister feel, which this place wears well. As much as the Rio Cathedral is an exercise in slightly kooky restraint, this church goes all out with busy decor – one serves as a wonderful counterpoint to the other, and both are uniquely stunning subjects for you and your camera.

An eclectic palace fit for a film set, the Museum of Fine Arts in Rio is tasteful so as to be more than pleasing to the eye: every aspect of this building, from the kitschy exterior, the palm trees that frame its entrance to the way the art is displayed inside it, is simply stunning. One cannot help but be impressed with how well this idea was executed, and when everything fits together to form such a perfect whole, it is near impossible to take a picture of it that does not reflect this. The only problem you will have here is taking far too many pictures.

Its name means “museum of tomorrow.” This science museum is a dead ringer for the one in Valencia, and this is no accident: the architect of both is one Santiago Calatrava, who seems to have a penchant for grand, skeletal, neo-futuristic structures by waterfronts. The enormous, origami-esque, multifaceted globe suspended from the ceiling of the atrium is worth entering the museum a thousand times over.

Another classic and something you can easily recognize, this endlessly evolving art installation quickly outgrew the stairs that started it all. Chilean artist Jorge Selaron began decorating the steps by his home with tiles as a way to improve upon the dilapidated stairway. Over many years, he covered the 215 steps between streets Joaquin Silva and Pinto Martins in tiles found and donated from all over the world. He died working on those very steps in 2013. Come here to admire the effort of his labor and take pictures of the stairs and the details of the tiles that cover them. If you look hard enough, you may even find a tile from your home country or one that has another kind of significance to you.

There is no firework display quite like the one at Copacabana when one year passes the baton to the next. The bay lighting up over and over with the explosion of colors is something that can’t be replicated outside of magical Rio. Luckily, you can take pictures of it and retain some of that magic forever.

If the giant Jesus statue guarding the city didn’t tip you off, let us be the ones to tell you that Brazilians are big on celebrating his birthday. There certainly won’t be a white Christmas to be had in Rio, unless you count the sand, but snow will be the last thing on your mind when you come to town this time of year. Trees and lights everywhere, street fairs, song, and religious revelry all make for the holidays to be very authentically Christmassy, even if the pictures in your Christmas album will not feature coats and mittens.

There is nothing as emblematic of Brazilian culture as a whole and Rio in particular as the Carnavale di Rio. If in fact, aliens came to Earth and humans were to show them a summary of what we’ve been up to in video form, it would, of course, have things like the moon landing, but the carnival in Rio would certainly feature, too. As well it should: with its fervent percussion beat and glittery, skimpy costumes adorning dancing women, there is no way to better showcase joy and communal celebration to someone new to this planet. Come to town before Lent to see and take pictures of the beautiful chaos and hear the loud rhythm of Rio ringing in your ears every time you look at the photos.

As you will see when you look up pictures of Rio online, the secret is out: everyone knows this city looks even better during sunrise and sunset when the light is low and soft and the day is just turning. Wait for the sun to creep around the curve and see the city dress in gold, or watch it dip into the sea and wait for the city to put on its lights. Rio truly is marvelous, and life is a miracle.