Afrikaans, also known as the Cape Dutch, belongs to the west Germanic branch of the Indo-European language family. It is spoken by 6.9 million people as a first and by 10.3 million people as a second language in South Africa. Afrikaans is also spoken in Botswana, Lesotho, Malawi, Namibia, Swaziland and Zambia. It is estimated that the total number of first language speakers of Afrikaans is 7.1 million but the numbers have been decreasing.

Baie Dankie (Thank you very much). Ps. if anyone out there wants to know how to pronounce “Baie Dankie” – say “buy-a-donkey” – how easy is that! ?

The name Afrikaans means ‘African’ in Dutch. It was originally used by the Dutch settlers and indentured workers brought to the Cape area in southwestern South Africa by the Dutch East India Company between 1652 and 1705. Most of the settlers were from the Netherlands, but there were also settlers from Germany, France, Scotland, and other countries. The indentured workers and slaves were mostly Malays, and the indigenous workers were Khoi and San people of South Africa.

Afrikaans was considered a Dutch dialect until the early 20th century. In 1925, it was officially recognized to be a distinct language from Dutch. There is some disagreement about the origin of Afrikaans. Some linguists believe that it originally developed first as a pidgin, and then as a creole that provided a common means of communication between Dutch settlers and their African and South Asian workers. Other scholars think that Afrikaans retained too much of the basic structure and vocabulary of Dutch to be considered a creole. 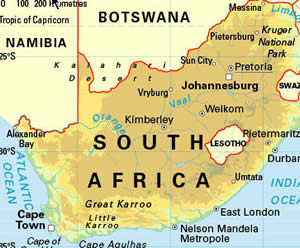 Colloquial, or spoken, Afrikaans is strongly influenced by English through a great deal of phonological, grammatical and lexical borrowing and code-switching. At the same time, due to strong anti-English sentiments, the influence of English on Standard Afrikaans has been relatively minimal. As a result, there may be an increasing gulf between colloquial and standard varieties of Afrikaans.

Below are the consonant phonemes of Afrikaans (from Wikipedia). Voiced paired consonants become voiceless at the end of words, e.g., baard ‘beard’ is pronounced as /baart/.

Stress in Afrikaans words usually falls on the first syllable, but there are some exceptions.

The normal word order in Afrikaans is Subject-Verb-Object.

The basic vocabulary of Afrikaans is Dutch in origin, but the language is heavily anglicized due to widespread Afrikaans-English bilingualism in South Africa. Spoken Afrikaans vocabulary also includes words from a variety of languages, such as ubuntu ‘humanity’, tsotsi ‘gangster’ (from Zulu and Xhosa), piesang ‘banana’ (from Malay); peri-peri ‘chili pepper’ (from Portuguese).

Below are some common Afrikaans words and phrases.

Here are the numbers 1-10 in Afrikaans.

Afrikaans is written with a standard Latin alphabet consisting of 26 letters.

Take a look at Article 1 of the Universal Declaration of Human Rights in Afrikaans.

Article 1
All human beings are born free and equal in dignity and rights. They are endowed with reason and conscience and should act towards one another in a spirit of brotherhood.

English has borrowed a number of words from Afrikaans. Among them are the following:

Top
How difficult is it to learn Afrikaans?
Afrikaans is considered to be a Category I language in terms of difficulty for speakers of English.
Top