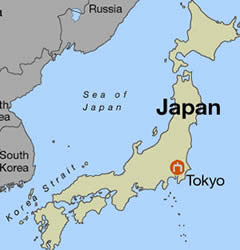 There have been numerous attempts to establish a genetic relationship between Japanese and other languages and language families. The most popular theory is that Japanese, like Korean, is a member of the Altaic language family. This suggests that Japanese and Korean are related, although extremely remotely. As far as Ainu, spoken in northern Japan, is concerned, there is no evidence that there is a relationship between Ainu and Japanese. Ainu is considered to be a language isolate.

In addition to Japanese, there are 14 Ryukyuan languages spoken in Okinawa and neighboring Ryukyu islands. These are mutually unintelligible with Japanese and, in most cases, also with each other. Since these languages cannot be understood by Japanese speakers as well as by speakers of other Ryukyuan varieties, some scholars in the past considered them to be separate languages. However, the prevailing view today is that they constitute a variety of Japanese. The data below is based on Ethnologue.

Click on the MLA Interactive Language Map to find out where Japanese is spoken in the US.

Japanese is the official language of Japan. All education, media, business, and government are conducted in Japanese.

Although Japan is a relatively small country, it has a surprisingly large number of dialects differing from each other in pronunciation, grammar and vocabulary. Many of them are mutually unintelligible. They are usually divided into two major groups:

Two forms of the language are considered standard:

Japanese has a simple syllabic structure consisting of a Consonant + Vowel.

Japanese has a very small consonant inventory. The consonant phonemes are listed below. A notable feature of Japanese is that the dental consonants /t/, /d/, /s/, /z/ undergo regular mutations before the front vowels /i/ and /u/.

Most dialects, including Standard Japanese, use morae (defined variously as length, weight, and delay) as the basis of the sound system rather than syllables. The Japanese syllable-final n is moraic, as is the first part of a double (geminated) consonant. For example, the word Nippon ‘Japan” has four morae ni + p + po + n, even though it has only three syllables. The number of characters in the hiragana spelling of the word reflect the number of morae. This moraic structure is imposed on loanwords with the result that the monosyllabic English word strike in Japanese becomes a four-morae word su + to + rai + ku.

Japanese stress is associated with differences in pitch. In Standard Japanese, the pitch shape is predictable on the basis of the location of pitch fall. The rules for pitch shape differ somewhat from dialect to dialect.

Japanese lacks true pronouns like those in Indo-European languages. Rather, there is a subset of nouns called daimeishi that unlike true pronouns take modifiers and do not constitute a closed class (new daimeishi can be added and old ones can go out of use). Personal daimeishi are seldom used because Japanese sentences do not always require explicit subjects, and because names or titles are often used where pronouns would appear in Indo-European languages such as English.

There are three series of demonstratives:

The normal word order is Japanese is Subject – Object – Verb. The verb must always be in final position even though permutations of other sentence components are possible. The basic sentence structure of a Japanese sentence is topic-comment. The particle wa is attached to various components of the sentence to topicalize them.

One of the most salient characteristics of Japanese grammar is the notion of politeness. There are three main levels of politeness levels in spoken Japanese: the plain form, the simple polite form, and the advanced polite form (honorific and humble). Since most relationships are not equal in Japanese society, one person typically has a higher position than the other. This position is determined by such factors as social position, age, job, etc. The person in the lower position will use the polite form, whereas the person in the higher position will use the plain form. Humble language is used when talking about oneself or one’s group, while the honorific language is used to describe the interlocutor and his/her group. The plain form in Japanese is characterized by the dictionary form of verbs + the da form of the copula. In the simple polite level, verbs end in –masu, and the copula desuis used. The advanced polite level frequently uses special honorific and humble verb forms. The honorific suffix –san ‘Mr., Mrs. or Ms.’ should not be used to talk to an outsider about oneself or someone from one’s own group.

The basic vocabulary of Japanese is a mixture of native Japanese words and words borrowed from Chinese and other languages. Japanese vocabulary abounds in borrowings from other languages. Japanese borrowed extensively from Chinese when they adopted the Chinese orthography. Linguists have sometimes likened the impact of Chinese writing on Japanese to the effect of the Norman conquest on the English language. Japanese words often have synonyms, one of them from Chinese, the other from Japanese. Words of Chinese origin (Sino-Japanese) are called kanga. They often appear more formal to Japanese speakers, just as Latinate words often sound more formal to English speakers. It is estimated that up to 60% of Japanese vocabulary consists of Sino-Japanese words. Even Japanese numerals have two forms.

Below are a few basic words and phrases in Japanese given in romanization.

Japanese has also borrowed a number of words from Portuguese in the 16th century, e.g., pan ‘bread,’ Iesu ‘Jesus.’ With the reopening of Japan in the 19th century, Japanese borrowed from Dutch, German, French, and most recently from English. Loanwords exist alongside native words, e.g., the word bypass can be rendered into Japanese are mawarimiti (native Japanese), ukairo (Sino-Japanese), or baipasu (English borrowing).

The Japanese writing system can be traced back to the 4th century AD, when Chinese writing was introduced to Japan through the medium of Buddhism, as Japan adopted Chinese cultural practices and reorganized its government in accordance with the Chinese administrative structure.

Because the Chinese characters (called kanji in Japanese) could not represent all the elements of the Japanese language, two syllabaries of approximately 50 syllables each, called hiragana and katakana, were created in the 12th century. Today, Japanese is written with a mixture of kanji, hiragana, and katakana. In addition, rōmaji (Roman script) is also used.

As an example, here is the word for ‘I’ written in the three scripts:

Below is an example from Wikipedia that illustrates the use of all four elements of Japanese writing in one sentence ( Red kanji, Green katakana, Blue hiragana, Black Rōmaji and Arabic numeral).

Take a look at Article 1 of the Universal Declaration of Human Rights in a combination of three Japanese scripts and in romanization (rōmaji).

English has a fairly large number of Japanese loanwords. Among them are the following: