Irish was the only language spoken in Ireland until the 17th century, but the dominance of English and the effects of 19th-century potato famines and emigration led to a sharp decline in the population. Today, Irish is spoken as a first language by a small minority of the population of Ireland. The main concentrations of native Irish speakers are scattered along the west coast of Ireland. An Irish-speaking area is called Gaeltacht. 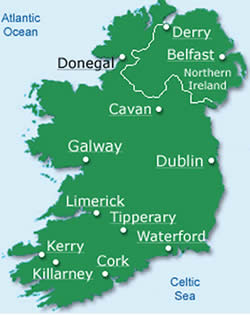 When the Republic of Ireland was established in 1922, Irish was adopted as an official language, along with English. Since then it has been a compulsory subject in government-funded schools. A relatively recent development is the spread of gaelscoileanna, i.e., schools in which Irish is the medium of instruction. Irish is also used in radio broadcasting (Raidió na Gaeltachta), television (Teilifis na Gaeilge), in newspapers, magazines, literature, theater, and the arts. In spite of all these efforts, the future of the Irish language remains uncertain. Although the number of speakers of Irish is rising in urban areas due to Irish-medium instruction, young people in Gaeltacht tend to use the language less than their elders, preferring to communicate in English.

Irish became an official language of the European Union in 2005.

There are three major dialects with considerable variation among them (Ethnologue).

There is also some evidence that the Irish spoken in urban areas and that spoken in Gaeltacht by an older population are becoming progressively more distinct.

The sound system of the Irish language varies from dialect to dialect; there is no standard pronunciation of the language.The description below is of a somewhat ‘idealized’ phonology of Irish.

Irish vowels can be long or short. Vowel length makes a difference in word meaning. In writing, long vowels are marked with an acute accent (known in Irish as síneadh fada or simply fada ‘long mark’), e.g., í, é, á, ú, ó. In the table below, vowel length is indicated by a macron over the vowel.

Below is an inventory of Irish consonant phonemes.

Irish words can begin with clusters of two or three consonants. In general, consonants in a cluster are either all broad or all slender. Like other Celtic languages, Irish words undergo several kinds of initial mutations:

For the most part, Irish words are stressed on the first syllable. There are some exceptions.

Irish is a highly inflected language.

Irish makes no distinction between familiar and formal second person pronouns, such as tu-vous in French, and tu-Usted in Spanish. Personal pronouns are not marked for case, but there are three different sets of pronouns:

An interesting feature of Irish grammar is fusion of pronouns with prepositions (sometimes called inflected prepositions), as in the following examples using the preposition ag ‘at’.

There are three kinds of cardinal numbers in Irish:

Although Irish has borrowed some words from English, its basic vocabulary is inherently Celtic. Here are some basic words and phrases in Irish:

Below are the numerals 1-10 in Irish Gaelic.

Celtic languages were originally written with the ogham alphabet. It consisted of 25 letters. About 500 ogham inscriptions dating back to the 4th-7th centuries AD have been found in Ireland, Scotland, Wales, and England. Some linguists think that the ogham alphabet was used primarily for record keeping. Ogham letters consisted of one to five perpendicular or angled strokes, meeting or crossing a center line. The form of the letters allowed them to be carved on wood, stone, or metal. Each letter was named after a tree or a plant, e.g.,

The Latin alphabet was introduced into Ireland by British missionaries in the 5th century BC. Today, all Celtic languages are written with adapted versions of the Latin alphabet. Because the Latin alphabet was not entirely suited for representing the sounds of Celtic languages, there were many ambiguities and inconsistencies in the spelling systems that persist to this day. Spelling and grammar were oficially standardised in 1958 with Gramadach na Gaeilge agus Litriú na Gaeilge – An Caighdeán Oifigiúil and a ‘reviewed’ stadard was issued in 2012 – Gramadach na Gaeilge: An Caighdeán Oifigiúil. This is the standard used in all official documents. It increasingly affects the spoken language, since the number of native speakers from Gaeltacht regions with distinctive dialects is declining.