Tamil (தமிழ்) belongs to the Southern branch of the Dravidian language family, spoken in southern India and northeastern Sri Lanka from prehistoric times. It is spoken as a native language by 61.5 million people in India, primarily in Tamil Nadu and neighboring states, and in northeastern Sri Lanka, as well as by 8 million second-language speakers (Ethnologue).

During the British rule of India, Tamil-speaking 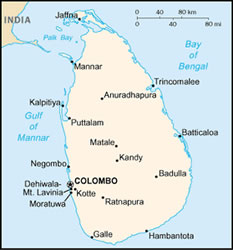 indentured laborers were sent to many parts of the British empire where they founded Tamil-speaking communities. Today, their descendants form sizeable Tamil-speaking populations in Singapore, Malaysia, Mauritius and South Africa. Tamil is also spoken in Bahrain, Fiji, Germany, Netherlands, Qatar, Reunion, Singapore, Thailand, United Arab Emirates, United Kingdom. The worldwide population of first-language speakers of Tamil is estimated at around 69 million people with as many as additional 8 million speaking it as a second language.(Ethnologue).

Tamil is spoken by 3.8 million people in Sri Lanka. It is the national language of Sri Lanka along with Sinhalese (Ethnologue).

Tamil is spoken by 3.8 million people in Malaysia (Ethnologue),

Tamil is one of the official languages of Singapore, along with English, Malay, and Mandarin. It isi spoken in Singapore by 111,000 people (Ethnologue).

The dialects of Tamil have evolved along three different dimensions. These dialects differ in phonology, grammar, and vocabulary.

The phonemes of modern standard Tamil include native sounds (‘low’ variety) and peripheral sounds that came from lexical borrowings (‘high’ variety). Both sets of sounds are used by educated speakers of Tamil.

Tamil has 5 short and 5 long native vowels. Vowel length makes a difference in word meaning. In the table below, vowel length is indicated by a macron over the vowel. Vowels in parentheses are peripheral, i.e., they are used exclusively in loanwords. In addition, there are two diphthongs /ai/ and /au/.

Tamil has 16 consonants. Consonants in parentheses occur only in borrowed words. The consonant system is characterized by the following features:

Stress in modern Tamil is fixed on the first syllable of a word.

Like other Dravidian languages, Tamil is agglutinative, i.e., it adds suffixes, one after another, to stems to form words and to express grammatical functions. Since there is no limit on the number of suffixes, some words in Tamil can be very long.

This class of words includes common nouns, proper names, numerals, pronouns and some adjectives. They are inflected for the following categories:

A typical Tamil verb consists of a verb base plus a grammatical suffix. The base consists of a stem and two suffixes: one for voice, and one for expressing causality.

The standard word order in Tamil is Subject-Object-Verb. The verb must always be at the end of the sentence, even though variation in the order of other sentence constituents is sometimes possible. Not all Tamil sentences have subjects, verbs, and objects, but the those elements that are present must still follow the Subject-Verb-Object order.

Modern Tamil vocabulary is largely based on that of classical Tamil. This makes classical Tamil comprehensible to speakers of modern Tamil. The language has also retained some loanwords from Sanskrit, especially in the area of religion and spirituality. Tamil also has some loanwords from Persian and Arabic. Some modern technical terminology is borrowed from English, though attempts are being made to have a pure Tamil technical terminology. Technical dictionaries in Tamil are readily available.

Tamil uses compounding and reduplication to form new words. Compound nouns are extremely common, e.g., the noun maratt-ati-nizal ‘shadow at the base of the tree’ consists of maratt ‘tree’ + ʈai ‘base’ + ‘nizal’ shadow.’ In addition, there are numerous onomatopoeic words. Such words usually represents natural sounds, and many of them are reduplicated, e.g., muņumuņu ‘murmur’.

Below are a few basic words and phrases in Tamil given in romanization.

Below are Tamil numerals 1-10 given in romanization.

Tamil has the greatest geographical spread and the richest and most ancient literature of all Dravidian languages, paralleled only by that of Sanskrit. It has an unbroken literary tradition of over two thousand years, during which time the written language has undergone relatively little change. As a result, classical literature is a part of everyday Tamil along with modern literature. The rich and varied Tamil literature includes an indigenous grammar that was created independently from that of Sanskrit. The earliest records of Tamil are inscriptions on stone dating back from 200 BC. Along with these inscriptions, there is a large body of literature, inscribed on palm leaves and transmitted orally, that goes back two thousand years.

The Tamil script is derived from a descendant of the ancient Brahmi script of India. It was designed to write literary Tamil that has changed little in the past thousand years, but it is not particularly well-suited for writing modern colloquial Tamil that has many loanwords from other languages. Attempts were made in the 19th century to create a writing system for the colloquial spoken language, but these efforts met with mixed success. The colloquial written language today can be found mostly in textbooks and in dialogs in literature.

Tamil is written horizontally from left to right, and its basic set of symbols consists of 18 consonants and 12 vowels. It is written with a syllabic alphabet in which all consonants have an inherent vowel. Diacritics, which can appear above, below, before or after the consonant, indicate change to another vowel or suppression of the inherent vowel. In contrast to many other Indic scripts, Tamil uses a reduced inventory of consonants. For example, there are no symbols for aspirated consonants since these sounds do not occur in Tamil. European punctuation is used.

Tamil letters have rounded shapes, so the Tamil script is sometimes referred to as the “round alphabet”. This is due to the fact that writing was done by carving symbols on palm leaves with a sharp instrument which made it easier to produce carved lines than straight lines and angles.

Take a look at Article 1 of the Universal Declaration of Human Rights in Tamil script and in romanization.

These English words came from Tamil?

How difficult is it to learn Tamil?
There is no data on the difficulty level of Tamil for speakers of English.