Azerbaijani (Азәрбајҹан дили, آذربایجان دیلی), also known as Azeri, is a member of the Turkic branch of the Altaic language family. Turkic-speaking peoples first appeared in the area that is today’s Azerbaijan in the 7th century AD. The region became Turkic-speaking in the 11th century when it was invaded by the Turks. It was invaded by Mongols in the 13th century, but the invasion was short-lived. In the early 1800s, Azerbaijan was divided between Persia and Russia. Russia took control of the northern, while Persia took over the southern region of the country.

After the partition, literature and the arts flourished in the Russian part of Azerbaijan. In the first years of the Soviet rule, communist authorities promoted the use of Azerbaijani, and in 1923 made it the official language of education. However, after World War II, the Soviet government began to wage a campaign again the growing Islamic influence in the Caucasus and stopped promoting the use of Azerbaijani. 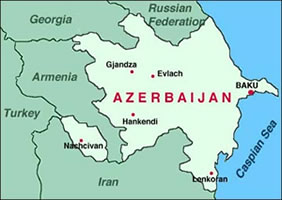 The sound system of Northern Azerbaijani is briefly described below. It is typical of all Turkic languages.

Northern Azerbaijani has 24 consonant phonemes. There are no consonant clusters at the beginning of words. Stops, fricatives, and affricates are devoiced in final position, e.g., kitap ‘book’ (in the nominative case), kitabi ‘book’ (in the accusative case).

Stress normally falls on the last syllable of a word.

Like all Turkic languages, Azerbaijani is agglutinative, i.e., grammatical relations are indicated by the addition of suffixes to stems. There are no prefixes. There is a one-to-one relationship between suffixes and their meanings, so that suffixes are strung together one after another, sometimes resulting in long words, e.g., davranmalıdırlar ‘brotherhood.’ There are various rules for the ordering of suffixes. Azerbaijani uses postpositions to signal grammatical relationships.

Word order in Azerbaijani sentences is normally Subject-Object -Verb. However, other orders are possible, depending on discourse-oriented considerations such as emphasis.

Below are Azerbaijani numerals 1-10.

Take a look at Article 1 of the Universal Declaration of Human Rights in two scripts.