Ojibwa (Ojibwe, Ojibway) belongs to the Ojibwa-Potawatomi group of the Algonquian branch of the Algic language family. Speakers of Ojibwa call it Anishinaabemowin or Ojibwemowin. It is a macrolanguage comprised of a number of autonomous varieties with no standard writing system. Several varieties of Ojibwa are spoken in Canada from Quebec, through Ontario, Manitoba and parts of Saskatchewan, with outlying communities in Alberta. Ojibwa is the third most spoken language cluster in Canada, after Inuktitut and Cree. In the U.S. Ojibwa is the most commonly spoken aboriginal language after Navajo and Cree. Varieties of Ojibwa are spoken in the U.S. from Michigan through Wisconsin and Minnesota, with a number of outlying communities in North Dakota, Montana, Kansas and Oklahoma.

Ojibwa served as a lingua franca across Canada and in the northern U.S. during the fur trade. Today, it is one of the more robust North American Native languages with efforts being made to revitalize it through multifaceted approaches that include immersion schools in which children are taught in Ojibwa.

There are some differences in the classification of Ojibwa varieties.

Ojibwa dialects tend to have three short and four long vowels. Long vowels below are marked with a macron. The long vowel /ē? lack a corresponding short one. Some varieties of Ojibwa also have nasal vowels (Wikipedia). Some dialects of Ojibwa drop unstressed vowels, e.g, in the Odaawaa dialect, Anishinaabemowin becomes Nishnaabemwin.

Ojibwa dialects usually have 17 consonants. Stops, fricatives and afffricates can be either voiced or voiceless. Voiceless consonants are often aspirated or preaspirated. The semivowel /w/ is pronounced with very little lip rounding. The glottal fricative /h/ occurs in some dialects instead of the glottal stop /?/ (Wikipedia). Ojibwe allows few consonant clusters, mostly in the middle or at the end of words. The voiceless glottal fricative /h/ is only in a small number of words.

Ojibwa words are divided into metrical feet. Every two syllables constitute a foot, starting with the beginning of a word. The first syllable in a foot is weak, the second one is strong. Long vowels are always strong. When they occur in the weak position of a foot, they form a separate one-syllable foot, and counting continues starting with the following vowel. In an example from Wikipedia, the word bebezhigooganzhii ‘ horse’, is divided into feet as follows: (be)(be)(zhi-goo)(gan-zhii).

Pronouns are marked for the following categories:

Ojibwa tends not to borrow words from other languages. Instead, it creates new words by using native elements. For instance, bemisemagak ‘airplane’ literally means ‘thing that flies’. However, there exist a few borrowing from other indigenous languages, especially Cree, from English, e.g., gaapi ‘coffee’, and from French, e.g., boozhoo ‘bonjour’.

Below are a few basic words and phrases in Ojibwa.

Below are Ojibwa numerals 1-10.

There is no standard orthography for writing Ojibwa. 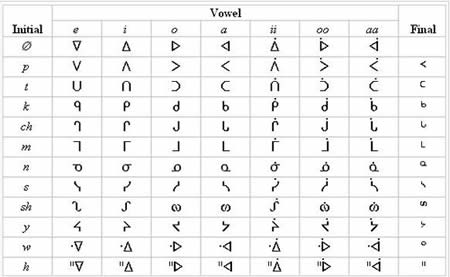 Take a look at Article 1 of the Universal Declaration of Human Rights in Northwestern Ojibwa.

American English is thought to have borrowed these words from Ojibwa.

How difficult is it to learn Ojibwa?
There is no data on the difficulty of Ojibwa for speakers of English.