Chechen (Нохчийн) is the largest member of the North Caucasian language group. It is spoken in geographically diverse regions of the world ranging from Russia and Western Europe to the Middle East. According to the Russian census of 2002, there are 1,350,000 speakers of Chechen. Due to continuous wars in the region as well as deportations during the Stalinist period, there is a large Chechen diaspora that includes the Republic of Georgia, Germany, Jordan, Kazakhstan, Kyrgyzstan, Syria, Turkey, and Uzbekistan. 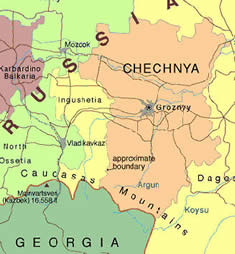 Chechnya is a region in the Northern Caucasus which has historically resisted all foreign rule. The current resistance to the Russian rule goes back to the late 18th century during the Russian expansion into territories formerly dominated by Turkey and Persia. There were also periodic Chechen uprisings in the 19th and early 20th centuries. In the late 1930s, Chechnya was combined with Ingushetia into the autonomous republic of Chechen-Ingushetia. The Chechens rose against Soviet rule during the 1940s which brought retaliation resulting in the deportation of the entire ethnic Chechen and Ingush populations to Kazakhstan and Siberia. During the deportations, the Chechen language was banned, families were torn apart, and children received little education in or exposure to the Chechen language. As a result, the descendants of deported Chechens were Russian-dominant bilinguals with limited proficiency in Chechen. Not surprisingly, the Chechen language today is heavily influenced by Russian.

Chechen has a number of mutually intelligible dialects, even though it is spoken in geographically widespread areas of the world (Ethnologue). The differences between dialects are mostly phonological. Not all dialects have a fully developed writing system.

Chechen has a complex phonological system with large inventories of both vowels and consonants, including ejectives, uvulars, and
pharyngeals.

Unlike most other Caucasian languages, Chechen has a large inventory of vowels and diphthongs. Except for /ə/, all vowels can be long or short. Length is significant since it makes a difference in meaning. It is represented by a colon after the vowel. In addition, Chechen has a number of diphthongs (ie, ie:, uo, uo:, ye, ye:), also distinguished by length. The vowel chart below is based on Komen, 2006). There are other, somewhat different analyses of the Chechen vowel system. .

The phonemic inventory of Chechen differs somewhat, depending on the analysis. The chart below is based on Nichols and Vagapov, 2004.

Stress in Chechen words normally falls on the first syllable, except in borrowed and international words which preserve the position of their original stress.

Chechen uses both agglutination and inflection to mark grammatical categories. In an agglutinative language affixes do not become fused with each other and do not change their form. They are simply strung one after another in a prescribed sequence with each affix representing one unit of meaning, e.g., plural, present tense, 1st person, etc., whereas in an inflective (synthetic) language, affixes become fused together so that one affix can represent several units of meaning, e.g., in the Russian word babushka ‘grandmother’, the affix -a at the end of the word represents ‘nominative case + feminine + singular’.

Chechen verbs are quite complex. Below is a short list of their major characteristics.

The vocabulary of Chechen comes from two main sources:

Below are a few basic words and phrases in Chechen in the Latin script.

Over time, Chechen has been written with several scripts.

The Cyrillic version of the Chechen alphabet is given below.

There are several versions of the Latin alphabet for Chechen. None have been standardized.

How difficult is it to learn Chechen?
There is no data on the difficulty of Chechen for speakers of English.