Kashmiri, also known as Keshur or Koshur, belongs to the Northwestern group of the Indo-Aryan branch of the Indo-European language family. It is the largest of the Dardic languages, and the only language in the Dardic group that boasts an early literary tradition. It is spoken primarily in the Jammu and Kashmir state of India. According to the 2001 census, it has 5.4 million speakers in India, with a total total of about 5.6 million speakers worldwide (Ethnologue). 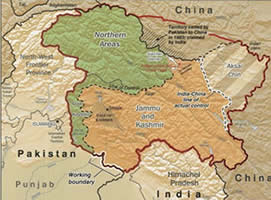 Kashmiri is one of the 22 official languages of India. Even though Urdu is the official language of the multilingual and multi-ethnic state of Jammu and Kashmir, Kashmiri is the majority language used as a medium of instruction in primary and middle schools. It serves as the medium of much of mass communication, such as newspapers, radio programs, and films. Most speakers of Kashmiri are fluent in a second language, typically Hindi/Urdu. Many Kashmiris also speak English.

Although there has been no definitive research on the dialects of Kashmiri, they are usually divided into two groups based on the extent to which the language is affected by geography and by religious and social differences between Hindus and Muslims, as well as between the cities and the countryside.

There are four major regional dialects which are listed below.

Social, or user-defined dialects, depend on the extent to which they were affected by either Sanskrit Perso-Arabic influence.

Due to its separation from other Indo-Aryan languages and its geographical proximity to the Perso-Arabic world, Kashmiri has developed some features that distinguish it from other Indian languages. These features involve both the sound system as well as the morphological and syntactic structure of the language.

In general, the sound system of Kashmiri shares many features with the sound systems of other Indo-Aryan languages, all of which have large inventories of vowels and consonants. Kashmiri syllables typically consist of a vowel preceded and followed by one or two optional consonants.

Kashmiri has a a large inventory of vowels which can be short or long. Some long vowels (/i:/, /e:/, /ə:/, /u:/, /o:/) and some short vowels (/e/, /o/, /ə/, /a/) can also be nasalized. Vowel length and nasalization distinguish word meaning. In romanization, long vowels are usually marked by a colon (a:), while nasalized vowels are marked by a tilde (ã).

Unlike other Indian languages, Kashmiri does not have aspirated voiced stops.

Kashmiri nouns are marked for the following grammatical categories:

Kashmiri verbs agree with their subjects in person and number and with their objects in gender and number. Grammatical functions of verbs are expressed by suffixes. Verbs are inflected for the following categories:

The normal word order in Kashmiri sentences is Subject-Verb-Object. However, other word orders are possible to mark emphasis.