Malay, also known as Bahasa Melayu, is a member of the Malayo-Polynesian branch of the Austronesian language family. It is spoken by the native Malay people on both sides of the Straits of Malacca that separate Sumatra from the Malay Peninsula. Since the Malacca Straits have always been a busy sea route, travelers came into contact with the language of the Malay people and spread it throughout the Indonesian islands. As a result, Malay became the lingua franca of the Indonesian archipelago, and eventually the main reason why it was chosen as the national language of the Indonesian Republic in the 20th century. 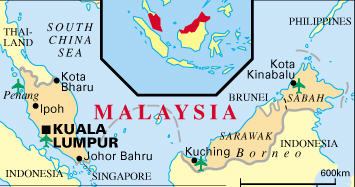 During the 19th and part of the 20th century, the Malay anguage was exposed to different influences. In the Netherlands East Antilles, the influences came from Dutch and Javanese; in the British-controlled areas, the influences came from English and local Malay varieties. Because higher education was available only in Dutch or in English, neither variety of Malay developed its own technical vocabulary. After the independence of Indonesia and Malaysia in the 1950s, each country pursued its own course in developing social, political, technical, and scientific terminology necessary for meeting the demands of the 20th century. A joint Indonesian-Malaysian policy for the creation of such vocabulary was created only in the late 1970s. As a result, the main differences between Indonesian and Malay are more lexical than grammatical, although there are regional differences in pronunciation as well.

Standard Malay is the official language of Malaysia and one of the four official languages of Singapore (along with English, Mandarin, and Tamil). It is also spoken in Indonesia, and Brunei, and is used as a working language in East Timor. It is spoken by 10.5 million people in Malaysia (2004 census) with a population total for all countries: of 15.8 million speakers of Malay as a first language with an additional 3 million second-language speakers (Ethnologue).

The language is characterized by significant differences between formal and informal registers.
The formal register is used in public speeches, formal writing, and in educational settings. It is characterized by a significant number of borrowings from Sanskrit, Arabic and other foreign languages. It is referred to as Standard Malay (Ethnologue).There are few first-language speakers of Standard Malay, most people learn it as a second dialect.

The informal register is used in everyday conversations. It is characterized by a significant number of borrowings from local languages. It is referred to as colloquial, or informal, Malay (Ethnologue).

The consonant system of Malay is fairly simple. Syllables in native words do not have consonant clusters and typically consist of a Consonant + Vowel or Vowel + Vowel. Loanwords, on the other hand, frequently contain consonant clusters, e.g., struktur ‘structure’.

The table below shows the consonant phonemes of Malay. Consonants in parentheses occur exclusively in borrowed words.

Stress in Malay does not distinguish word meaning since it regularly falls on the penultimate (next to the last) syllable in a word.

The language is rich in pronouns.

Neutral word order in Malay is Subject-Verb-Object. However, other word orders are possible, depending on emphasis and style. For instance, words or parts of the sentence that contain the most important, or new information, usually appear in initial position. For example, in the sentence Saya pergi ke pasar kemarin ‘I went to the market yesterday’, the focus is on the subject. But in the sentence Ke pasar saya pergi, kemarin ‘To the market I went yesterday’, the focus is on where I went yesterday.

Below are some common words and phrases in Malay.

The Malay numerals 1-10 are given below.

The earliest known inscriptions in Malay, found on the island of Sumatra, date back to 683 AD. They were written in a Pallava script, a variant of the Brāhmī script, and contained accounts of military expeditions and laws. When Islam arrived in southeast Asia during the 14th century, a modified form of the Arabic script, known as the Jawi script, was adopted for writing Malay. The script was used until the first quarter of the 20th century in Indonesia, and until the 1950s in Malaysia. The Jawi script is still used today as one of two official scripts in Brunei, and in Malaysia, Indonesia and Singapore, mostly in religious contexts.

Although the representations of speech sounds are now largely identical in the Indonesian and Malay varieties, a number of minor spelling differences remain, usually reflecting the romanization practices used in British and Dutch colonies.

Take a look at Article 1 of the Universal Declaration of Human Rights in Malay.

There are several common English words that came from Malay. Among them are the following: