Bislama, also known as Bichelama, is spoken on Vanuatu, a tropical archipelago made up of 83 islands, which stretches over some 500 miles of the Pacific Ocean, halfway between Australia and Hawai’i. Bislama is an English-based creole whose name comes from the French bêche de mer or ‘seacucumber’. 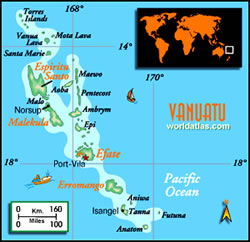 The name became associated with the pidgin used by local laborers who harvested and dried sea cucumbers and by their English-speaking overseers. It is partially intelligible with Tok Pisin of Papua New Guinea, Pijin of the Solomon Islands, and Torres Strait Creole.

Bislama is one of the official languages of Vanuatu, along with English and French. It is spoken as a first language by 10,000 of the country’s inhabitants who speak over a hundred different first languages (Ethnologue). Bislama is the major language of politics, commerce, and of the media. It is used orally in education.

Bislama shows some dialectal variation, principally in pronunciation. Differences are primarily due to the first languages of the speakers.

Even though most of the words in Bislama were borrowed from English or French, their pronunciation is quite different. In addition, since Bislama is learned as a second language by most speakers, its pronunciation is influenced by the speakers’ first language.

Bislama has a simple consonant system with17 consonant phonemes, i.e., sounds that differentiate word meaning. There are no consonant clusters. When English words are borrowed into Bislama, the consonants are often either dropped, or vowels are inserted between them, e.g., four becomes foa, school becomes sukul, six becomes sikis, orange becomes aranis.

The grammar of Bislama is similar to that of Tok Pisin. Like all pidgins and creoles, Bislama lacks inflections. Reduplication is very common, and serves many different purposes.

There is a limited number of prepositions. Two of them are especially frequent and have a wide range of meanings.

Bislama vocabulary includes words from English, French, and a number of Vanuatu languages, e.g., kumala ‘sweet potato’ from a Melanesian language. Most words have a wide range of meanings. When precision is required, the result may be a long description instead of a single word. Reduplication is a common phenomenon, e.g., smolsmol ‘tiny’, tingting ‘thought’.

Below are a few basic words and phrases in Bislama.

Bislama numerals 1-10 are given below.

Bislama was an unwritten language until about 100 years ago. The publication of a dictionary in 1995 has helped to create a standardized orthography. Below is the standard Bislama alphabet.

Take a look at Article 1 of the Universal Declaration of Human Rights in Bislama.

How difficult is it to learn Bislama?
There is no data the difficulty of Bislama for speakers of English.