Tagalog (Filipino) belongs to the Malayo-Polynesian branch of the Austronesian language family. The name of the language is derived from tagá-ílog, from tagá– ‘native’+ ílog ‘river’ It is spoken by 21.5 million people as a first language and as a second language by a great majority of Filipinos. Tagalog is also spoken in Canada, Guam, Saudi Arabia, United Arab Emirates, United Kingdom, and USA. The total number of speakers of Tagalog worldwide is estimated to be 24.2 million (Ethnologue). It is the sixth most-spoken language in the U.S. and the lingua franca of Filipinos anywhere in the world.

Tagalog was originally native to the southern part of Luzon, prior to spreading as a second language over all the islands of the Philippine archipelago, due to its selection as the basis for Filipino, the national language of the Philippines, in 1937 and to the fact that Tagalog is spoken in the Philippine capital of Manila, the largest city of the country. From 1961 to 1987, Tagalog was also known as Pilipino. In 1987, the name was changed to Filipino.

→Click on the MLA Interactive Language Map to find out where Tagalog is spoken in the United States. 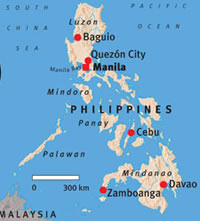 Tagalog is one of the major languages of the Republic of the Philippines. It functions as its lingua franca and de fcto national working language of the country. It is used as the basis for the development of Filipino, the national language of the Philippines, a country with 181 documented languages. It is spoken in central and southern Luzon, in Manila, the capital of the Philippines, and on some of the other islands. According to the Philippine Census of 2000, 21.5 million people claim Tagalog as their first language. In addition, it is estimated that 50 million Filipinos speak Tagalog as a second language. English is the language of higher education and a lingua franca in the Philippines, second only to Filipino. Many Filipinos who are fluent in English frequently switch between Tagalog and English for a variety of reasons. This mixed language is called Taglish. It is more common among educated city dwellers than in rural areas. Frequent contact between Tagalog-speaking and Spanish-speaking people during the Spanish occupation of the Philippines has resulted in Philippine Creole Spanish known as Chabacano. Since 1940, Filipino has been taught in schools throughout the Philippines. Tagalog is also the language of major literary works, of films, and of the media..

Tagalog is a non-tonal language with a relatively small number of phonemes, i.e., sounds that make a difference in word meaning.

Tagalog has 5 vowel phonemes, i.e., sounds that make a difference in word meaning. There is a contrast between short and long vowels in non-final syllables.

Tagalog has 18 consonant phonemes. Tagalog syllables have a relatively simple structure. Most syllables are either open (end in a vowel) or in /m, n, ŋ/. The consonant /ŋ/ can occur at the beginning of words. The consonants /f/ and /t/ occur exclusively in loanwords. Thus, despite its spelling, the word Filipino is pronounced as /pilipino/.

Stress falls on either the last or the next-to-the-last syllable of words, and is accompanied by a lengthening of the vowel.

Nouns are not marked for case or number. Only some nouns borrowed from Spanish are marked for gender, e.g., amigo ‘friend’ (masculine) – amiga ”friend’ (feminine).Nouns are usually preceded by case markers that are divided into two classes: one set for names of people (personal) and one for everything else (common).There are three markers:

Tagalog is a verb-initial language. The order of other constituents that follow the verb is relatively free, but there is a general preference for the subject to precede the object. Numbers and other quantifiers generally precede nouns, whereas demonstratives, adjectives and possessive pronouns may either precede or follow the noun they modify.

Tagalog vocabulary is Austronesian in origin with borrowings from Spanish, English, Min Nan Chinese, Malay, Sanskrit, Arabic, Tamil, Persian, Kapampangan, and other Austronesian languages. Spanish loanwords reflect over 300 years of Spanish domination, while English loanwords resulted from half-century of American control over the Philippines. Here are some examples of borrowed words in Tagalog.

Below are a few basic words and sentences in Tagalog.

Below are Tagalog numerals 1-10.

The first book in Tagalog was Doctrina Cristiana published in 1593. The first grammars and dictionaries of Tagalog were created by Spanish clergymen during the 300-year Spanish occupation of the Philippines. Although it is sometimes believed that each province in the Philippines had its own ancient alphabet, Spanish writers of the 16th century reported that use of writing was found only in the Manila area at the time of first contact with Spain. Writing spread to the other islands later, in the middle of the 16th century.

The Spaniards usually called the ancient Filipino script “Tagalog letters”, regardless of the language for which it was used. The so-called “Tagalog letters” were actually a syllabic script called Baybayin, which was used until the 17th century when it was gradually replaced by the Latin alphabet that is still in use today. The word baybayin (from Tagalog baybay ‘spell’) means ‘alphabet’. The Baybayin alphabet was probably developed from the Javanese script that was adapted from the Pallava script, the latter itself derived from the Brahmi script of ancient India. Baybayin was mainly used for letters, poetry, and incantations.Today, the Baybayin alphabet is used mainly for decorative purposes, although there are attempts to revive its use.

Today, Tagalog/Filipino is written with the 26-letter Latin alphabet. There is a fairly good correspondence between spelling and pronunciation. The letters c, f, j, q, v, x, z are used mostly in foreign names and English or Spanish loanwords. They are usually not represented in the Tagalog alphabet. The orthography does not mark stress or vowel length. The glottal stop /ʔ/ is not represented in writing at all. The velar nasal consonant /ŋ/ is represented by the digraph ng. The current Tagalog alphabet, called abakada, is given below:

Take a look at Article 1 of the Universal Declaration of Human Rights in Tagalog.

English has borrowed a few words from Tagalog. Among them are the following: