Catalan first appeared as a distinct language in the 10th-12th centuries. It developed from Vulgar Latin on both sides of the eastern Pyrenees mountains in the 13th century, and was exported to several regions of southern Spain, such as Barcelona and Valencia, and to the Balearic Islands and the Alghero region of Sardinia, Italy. 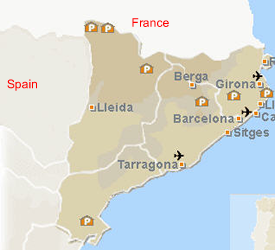 Catalan is an official regional language of Spain and Andorra, and the co-official language in Catalonia, the Balearic Islands, Valencia region of Spain, and in the Sardinian city of Alghero.

Catalan suffered several periods of prohibition and repression in the 18th century, but in the 19th century, during a period of economic, cultural and national renaissance, Catalan was reborn as the language of literary culture. The language was standardized through the publication of spelling rules in 1913, and a grammar in 1918. During the first 30 years of the 20th century, Catalonia recovered a degree of political power. During the Spanish Second Republic (1931-1939), Catalan was restored to its official language status, which it had lost in the 18th century. However, the Spanish Civil War put an end to Catalan’s resurgence and it was banned once again from public use. Following the death of Franco in 1975 and the restoration of democracy, the ban was lifted, and Catalan is now an official regional language that is used in politics, education and the media.

Standard Catalan is based on Central Catalan as spoken by educated people in Barcelona.

The sound system of Catalan shares many features with neighboring Romance languages such as French, Italian, Portuguese, Sardinian, and Spanish.

Catalan has 7 vowel phonemes, i.e., sounds that make a difference in word meaning. In addition, Catalan has several diphthongs. Compared with Spanish, Catalan does not have the rising diphthongs , e.g., ie and ue, but has a large number of falling diphthongs, e.g., eu, au, ou.

Catalan has an inventory of 23 consonant phonemes. The phonemic status of bracketed consonants is a matter of dispute due to dialectal differences.

Stress normally falls on the penultimate syllable if the word ends in a vowel, vowel + s, or –en; otherwise if falls on the final syllable.

Catalan nouns have the following features:

The pronominal system of Catalan is quite complicated. Below are a few of its features:

The verb system of Catalan is characterized by the following features:

The neutral word order in Catalan is Subject-Verb-Object. Other word orders are possible to indicate topic (what the sentence is about, or old information) and focus (new information), as well as emphasis.

Catalan shares most of its vocabulary with other Romance languages. Below are a few common Catalan phrases and words.

Below are the numerals 1-10 in Catalan.

Catalan began to appear in written documents during the 12th century. It was standardized through the publication of spelling rules in 1913, and of a grammar in 1918. Standard literary incorporates features of several dialects but is largely based on the Central Catalan dialect as spoken by educated people in Barcelona.

Catalan alphabet consists of 26 letters. Click here to see correspondence between letters and sounds they represent.

Take a look at Article 1 of the Universal Declaration of Human Rights in Catalan.