Czech (Čeština) belongs to the West Slavic group of the Slavic branch of the Indo-European language family. It is spoken by 9.2 million people in the Czech Republic. There are expatriate Czech communities in Austria, Bulgaria, Canada, Israel, Poland, Romania, 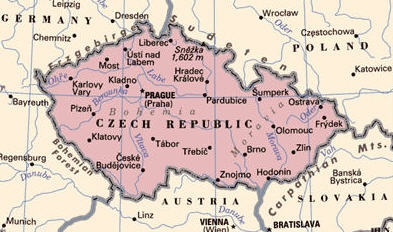 Slovakia, Ukraine, and USA. The worldwide population of Czech speakers is estimated at around 9.5 million (Ethnologue). Czech is close to Slovak. In fact, Czech and Slovak speakers are usually able to understand each other.

Czech is the official language of the Czech Republic. The dialect of Prague, capital of the country, forms the basis for Standard Czech. Standard Czech is the language of government administration, all levels of education, the media, and of publication. It is used alongside Common Czech, the colloquial spoken language.

Czech has a number of mutually intelligible dialects (Ethnologue):

There is an increasing mutual influence between Literary Czech and Common Czech, so that the main remaining differences between the two varieties now have to do with pronunciation and morphology (internal structure of words), rather than with syntax and vocabulary.

Czech has five vowel phonemes, i.e., sounds that differentiate word meaning. Most vowels can be either long or short. Vowel length makes a difference in the meaning of words.

Stress alone does not distinguish word meaning. It always falls on the first syllable of a word.

Czech is a richly inflected synthetic language with a grammar that is very similar to that of other Slavic languages. Grammatical categories are expressed as synthetic inflections added to the stems of nouns, adjectives, verbs, and most pronouns. All native Czech stems are inflected, as well as most borrowings from other languages.

Czech nouns are marked for gender, number, and case. The three are fused into one ending, as is the case in all Slavic languages.

Most of Czech vocabulary is derived from Common Slavic roots that are shared by all Slavic languages. In addition, Czech has been influenced by a number of languages, especially Old Church Slavonic, introduced into the area by Cyril and St. Methodius in the 9th century, as well as Latin and German, the latter due to integration of Czech provinces into the Habsburg Empire.

Below are the Czech numerals 1-10.

Listen » Pronunciation of the Czech numerals

Until the end of the 13th century, Czech was written with an unmodified Latin alphabet. Later, this alphabet was expanded to include digraphs and trigraphs to represent Czech sounds that were not included in the Latin alphabet. At the beginning of the 15th century, the religious reformer Jan Hus devised a writing system in which digraphs and trigraphs were replaced with diacritics over some Latin letters to indicate palatalization of consonants and length of vowels. Digraphs and letters with diacritical marks were used alongside each other for several centuries, but the diacritics prevailed in the end. The only digraph in modern Czech is ch, that represents a velar fricative (similar to that of the German [ch] of Bach). The modern Czech alphabet consists of 42 letters. It is given below.

Listen » Pronunciation of the letters of the Czech alphabet

Take a look at Article 1 of the Universal Declaration of Human Rights in Czech.

English has borrowed a few words from Czech. Here are some of them: