Dari, also known as Afghan Persian, East Farsi, and Eastern Persian, is a member of the Indo-Iranian branch of the Indo-European language family. It is spoken by 7.6 million people in Afghanistan. Various dialects of Dari are also spoken by some 15,000 people in Iran (including Zoroastrian Dari), and by 1 million people in Pakistan, as well as in emigré communities in the Middle East, Europe, Canada, and the U.S. The total number of Dari speakers around the world is estimated to be around 9.6 million (Ethnologue). 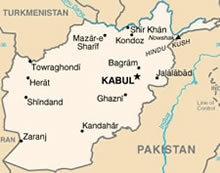 Dari is the national language of Afghanistan, along with Pashto. It serves as a lingua franca among speakers of the many different languages of the country. Dari is taught in schools, used in the media, and in government administration. In Iran, Dari, is not written or taught in schools. There are 1 million Dari speakers, many of them refugees of the war, in Pakistan where the language has no official status.

Click on the MLA Interactive Language Map to find out where Persian (all dialects) is spoken in the U.S.

Dari has a number of dialects, most of which are mutually intelligible:

Radio Afghanistan broadcasts are promoting a standardized pronunciation of the literary language based on classical norms. Formal Dari speech is closer to Standard Western Persian (Farsi) of Iran, while informal speech in some parts of Afghanistan is closer to Tajik of Tajikistan.

The sound system of Dari differs somewhat from that of Contemporary Standard Persian, possibly due to the influence of surrounding Turkic languages.

Dari has seven vowel phonemes which are given below. The vowels /e/ and /o/ have long counterparts. Vowel length makes a difference in word meaning. Dari has two diphthongs, /ai/ and /au/, which have no counterparts in Western Persian.

The consonant inventory of Dari may vary somewhat, depending on the dialect.

Stress typically falls on the last syllable of the root.

The grammatical systems of Dari (Eastern Persian) and Farsi (Western Persian) do not differ in any significant way. The description below covers the main grammar points of both languages. Both Dari and Farsi are inflected languages, i.e., they add suffixes to roots to express grammatical relations and to form words. Unlike many other Indo-Iranian languages, Dari and Farsi have lost most of their noun and verb inflections.

Verbs are marked for the following categories:

The normal word order is Subject-Object-Verb. Modifiers follow the nouns they modify.

Dari frequently uses derivational affixes to form new words from nouns, adjectives, and verbal stems. New words are also formed by compounding, i.e., by combining two existing words into one. Dari also has a large number of Farsi and Arabic loan words which are more prevalent in the written than in the spoken language. Pashto and Tajik words have also been introduced into the language. Most recently, there have been a number of borrowings from English.

Below are a few common Dari phrases and words in Latin transliteration.

Persian and Dari are written in a modified Arabic script, known as Perso-Arabic. It contains 4 additional letters to represent Persian sounds [p], [ʃ], [ʒ], [g] which are not represented in the Arabic alphabet. The alphabet is consonant-based. Like Arabic, it is written from right to left. Like Arabic, it can also be written in a variety of script forms.

Several attempts were made in the 19th-20th centuries to replace the Perso-Arabic alphabet with Latin-based alphabets.

Take a look Article 1 of the Universal Declaration of Human Rights in the Perso-Arabic script and in Romanization.

English has borrowed a number of words from Persian which, in turn, had borrowed from Arabic. Most of them came into English indirectly through other languages, mostly French and Greek. A few of these loanwords are listed below: