Amharic (amarəñña, አማርኛ), also known as Abyssinian, Amarigna, Amarinya, Amhara, Ethiopian, belongs to the Semitic branch of the Afro-Asiatic language family. Amharic has close to 22 million first-language speakers and 4 million second-language speakers worldwide, of which slightly over 21.6 million live in Ethiopia (Ethnologue). It is related to Ge’ez, a liturgical language of the Ethiopian Orthodox Church. 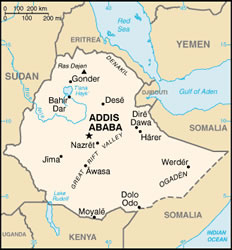 Amharic has been the language of the ruling class of Ethiopia since the end of the 13th century. In the early 17th century it became the lingua franca of Ethiopia, a multilingual country with 87 living languages (Ethnologue).

Amharic, with 22 million first- and 4 million second-language speakers, is the official working language of Ethiopia, along with English and Tigrinya. It is used in government, public media, national commerce, and in education up to the seventh grade. It has been the working language of government, the military, and of the Ethiopian Orthodox Tewahedo Church throughout modern times. Many speakers of Amharic also speak English, Arabic, Afaan Oromo, and Tigrinya.

Amharic has a variety of local dialects, all of which are mutually intelligible. There are three major dialects: Gondar, Gojjami, and Showa. There are specially marked differences in pronunciation, vocabulary, and grammar between the northern Gojjami and the southern Showa dialects. The standard spoken and written language is based on the speech of Addis Ababa, the capital of Ethiopia.

Amharic has seven vowel phonemes, i.e., sounds that distinguish word meaning. They are given in the table below (based on Wikipedia).

Amharic has a rich consonant system. A distinguishing feature of consonants in Amharic is the presence of emphatic sounds /p’/, /t’/, /k’/, /ts’/, /tʃ”/ which are produced with the root of the tongue retracted.

The grammatical structure of Amharic is quite similar to that of other Semitic languages. Amharic uses both prepositions and postpositions to mark relations in sentences.

Like other Semitic languages, Amharic has a very elaborate verb system.

The typical word order in Amharic is Subject – Object – Verb. All modifiers precede the nouns they modify

Amharic vocabulary has been strongly influenced by Arabic and by Cushitic languages, especially Afaan Oromo.

Listen to a few basic words and phrases in Amharic.

Below are the Amharic numerals 1-10.

Amharic has been a written language for at least 500 years, and has a fairly sizable written literature. It is written in a script called fidel (or fidäl) which means ‘letter’, a consonant-based syllabary which was adapted from Ge’ez, the extinct classical language of Ethiopia. Originally, the script contained only symbols for consonants. Vowels were added in the 3rd century AD. The script has 33 basic characters, each of which has seven forms depending on which vowel is added to the consonant. It is written horizontally from left to right. An example of the consonant t with diacritics indicating vowels is given on the right (from Omniglot).There is no standardized system for the romanization of Amharic.

Click here to see your name written in Amharic.

The name Rastafari comes from ras (ራስ ) ‘head’ + täfäriyawyan (ተፈሪያውያን) ‘Rastafarians.’ It refers to Haile Selassie, former Emperor of Ethiopia. Many Rastafarians learn Amharic because they consider it to be a sacred language. Various roots reggae musicians have written songs in Amharic.

How difficult is it to learn Amharic?
Amharic is considered to be a Category III language in terms of difficulty for speakers of English.
Top

OLAC Resources in and about the Amharic language