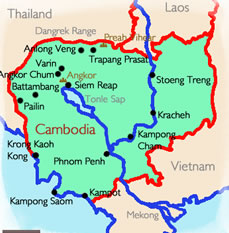 Click on the MLA Interactive Language Map to find out where Khmer is spoken in the United States. The history of Khmer is usually divided into three periods:

As the official language of the Kingdom of Cambodia, Khmer is used in the media, government administration, at all levels of education, and in most informal and formal contexts.

Khmer has three main dialects that form a continuum running from north to south:

Kmer is an extremely vowel-rich language which does not employ tones, unlike some of its Southeast Asian neighbors. Vowels Khmer has seventeen vowel phonemes, i.e., sounds that can make a difference in word meaning. Seven vowels can be either short or long, two vowels /ɛ/ and /ɔ/ are only long, and one vowel /ɐ/ is only short. In addition, there are three short and nine long diphthongs. This makes for a total of 31 possible vowel nuclei. In the table below, vowel length is indicated by a macron over the vowel.

Khmer has 17-21 consonants, depending on the dialect. Consonant clusters are allowed at the beginning, but not at the end of words. Not all consonants can occur in word-final position. There is a three-way contrast between plain, aspirated, and implosive stops. Aspiration in marked by a raised /ʰ/.

Stress normally falls on the final syllable of the word.

Like other Austroasiatic languages, Khmer is an analytic language, i.e., it does not use inflections to express grammatical relations. Instead, grammatical relations are signaled by word order and by various particles. Nouns Khmer nouns are not marked for number, gender, or case. Number can be inferred from context, through the use of particles, numerals, or by reduplication. Gender is also unmarked, but distinctions can be made by using such words as “son”, “daughter”, “male”, and “female”. Pronouns The pronominal system of Khmer is quite complex and includes many honorific variations that are sensitive to the relative status of the interlocutors, such as their age, perceived status, as well as to levels of intimacy. Verbs Verbs are not marked for person, number, tense, aspect, or mood. Tense and aspect can be shown by particles and adverbs or understood through context. Social registers Khmer employs a system of registers which include those used for informal speech, polite speech, speaking to or about royals, and speaking to or about monks. Each register uses different verbs, names of body parts, and pronouns. Below is an example from Wikipedia, showing the different forms of the verb “to eat” across five different social registers.

Modern Khmer typically derives new words by means of prefixes, infixes, and reduplication. In the past, the language has borrowed many words from Sankrit. With the advent of Theravada Buddhism at the beginning of the 15th century, Khmer began to borrow Pali words. However, as a consequence of Khmer nationalism that emerged in the 1960s, there was a movement to expunge Sankrit and Pali words from the lexicon. During the period of French domination, many French words were borrowed into the language and have become a part of both the spoken language and of technical terminology. Colloquial Khmer also has some Chinese and Vietnamese loanwords.

Below are Khmer numerals 1-10 in romanization and in Khmer script. ប្រាំ

The Khmer script is based on a variant of the Brahmi script used to write Sanskrit, Hindi, and other Indo-Aryan languages. The Khmer script has symbols for thirty-three consonants, twenty-four dependent vowels, twelve independent vowels, and several diacritic symbols. It is a syllabic alphabet in which each consonant has two forms, one with an inherent vowel /a/ (first series) and one with an inherent vowel /o/ (second series). Vowels are indicated by using either separate letters or diacritics written above, below, in front of, after, or around the consonants. The pronunciation of the vowels depends on whether a consonant they are attached to belongs to the first or the second series. All consonants have a subscript form that is used to write the second consonant of a cluster. There are no spaces between words in Khmer. Spaces are used to indicate the end of a clause or sentence (SEAsite, Northern Illinois University). Although some efforts have been made to standardize Khmer spelling, there are inconsistencies in the spelling of many words. In addition, the romanization of Khmer is often done on an ad hoc basis. The International Phonetic Alphabet is sometimes used to transcribe Khmer, based either on their pronunciation or on their Khmer spelling. Since pronunciation can vary from one dialect to another, the resulting transcriptions may be quite misleading. Take a look at Article 1 of the Universal Declaration of Human Rights in Khmer.