Danish (Dansk) belongs to the East Scandinavian group of the Germanic branch of the Indo-European language family. It is spoken by 5.4 million people in Denmark. It is also spoken in Canada, Germany, Greenland, Iceland, Norway, Sweden, United Arab Emirates, USA. The total number of speakers of Danish worldwide is estimated at around 5.6 million (Ethnologue).

Danish is closely related to Norwegian and Swedish. The three languages developed from Old Norse which was spoken in the areas of Scandinavia that are now Norway, Denmark and Sweden. To this day, Danes, Norwegians, and Swedes can talk to each other without an interpreter. Despite the high degree of mutual intelligibility it would not be correct to call the three languages dialects, because Danes, Norwegians, and Swedes see these languages as standardized official languages of their respective countries with separate norms for speaking and writing. 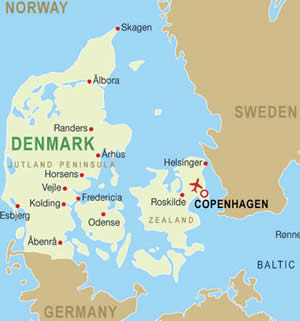 Danish and Swedish became unitary standardized languages earlier than Norwegian. They developed an independent status from the time of the Reformation when the Bible was translated into each of them.

Danish is the de facto national language of Denmark (Ethnologue). It is the national language of Greenland along Greenlandic Inuktitut, and a compulsory subject in primary schools on Faroe Islands. In addition, Danish is used by the Danish minority in Southern Schleswig, an area of Germany bordering Denmark, where it has the status of a protected minority language.

Standard Danish is based on Eastern Danish spoken in and around the capital of Copenhagen. It is spoken in the big cities, taught in schools, and used in the media. Since Denmark’s territory consists of many islands and peninsulas, there are many other regional dialects, not all of them mutually intelligible.

There are differences in pronunciation among the various dialects of Danish. The description below is based primarily on Standard Danish.

Danish has a very large inventory of vowels, most of which can be either long or short, rounded or unrounded. Vowel length makes a difference in word meaning. It is indicated by a colon after the vowel in the table below. Rounded vowels are produced with rounded protruding lips.

Danish has 17-18 consonants, depending on the analysis.

Stress in native Danish words normally falls on the first syllable. Loanwords may have other stress patterns.

Danish has a pitch accent, known as stød. It is is realized as a glottal catch, or creaky voice which is sometimes called laryngealization, because the tight compression of the vocal cords causes them to vibrate at frequencies below the frequency of a normal voice. In most dialects of Danish, stød can occur only in syllables that are stressed and end in a voiced consonant.

Danish grammar is similar to the grammar of other Germanic languages, including English.

Gender and number are conflated into one ending.

The normal word order in declarative sentences is Subject-Verb-Object. In questions, the order is Verb-Subject-Object.

Below are a few common phrases and words in Danish.

Listen » Pronunciation of common words and phrases in Danish

Below are the Danish numerals 1-10.

Danish uses the standard 26 letters of the Latin alphabet, plus three additional vowels æ, ø, å which are traditionally listed at the end of the alphabet. The same alphabet is used for writing Norwegian. There are 9 vowel and 20 consonant symbols.

Take a look at Article 1 of the Universal Declaration of Human Rights in Danish.

English has borrowed a few words from Danish (Norwegian). Here are some of them.