K’iche’, also spelled Quiché, is a member of the Quichean branch of the Mayan language family. It is spoken in the central highlands of Guatemala (Ethnologue). 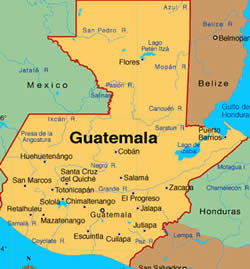 K’iche’ is believed to have originated over 4,000 years ago from an ancestral Proto-Mayan language that was spoken by the people who inhabited what are today Guatemala, Honduras, and the Yucatán peninsula. The language underwent a spelling change as a result of the 1987 Guatemalan Government Decree which regularized Mayan orthographies that were previously based on Spanish traditions. K’iche’ has a long literary tradition, e.g., Popol Vuh, the sacred book of the Mayas, representing an account of Maya history and mythology, beginning with the creation of the world and written in Classical K’iche’. The K’iche’ culture reached its pinnacle at the time of the Spanish conquest.

Central K’iche’ is spoken by 2.3 million people, as a first or second language. 300,000 of them are monolingual speakers of the language (Ethnologue). It is the second most widely spoken language in Guatemala after Spanish. It has played animportant role in the Mayan cultural revitalization movement. Although it has no official status in Guatemala, and although the first-language literacy rate is only about 1%, K’iche’ is being increasingly taught in schools and used on the radio.

K’iche’ has substantial dialectal variation. However most speakers use Central K’iche’, the variety most commonly used in the media and education.

The sound system of K’iche’ is typical of all Mayan languages. Vowels K’iche’ has five vowels which can be long or short. Vowel length distinguishes word meaning.

K’iche’ has a relatively large inventory of consonants although it lacks voiced stops, fricatives, and affricates. The table below lists the consonant phonemes of K’iche’.

Stress in K’iche’ always falls on the last syllable if the vowel is either long or is followed by a consonant. Otherwise, it falls on the penultimate (next to the last) syllable.

Like other Mayan languages, K’iche’ is an ergative language. Nouns, adjectives, transitive and intransitive verbs, and positionals are inflected.

The verb system of K’iche’ is quite complex. Aspect plays a larger role than tense.

Like all Mayan languages, K’iche’ makes extensive use of particles which have many functions, including negative, interrogative and demonstrative.

The basic word order in K’iche’ is Verb-Object-Subject, but other word orders are possible, depending on the focus of the sentence.

The bulk of K’iche’ vocabulary is Mayan in origin with some borrowings from Spanish. The language has also borrowed words from other neighboring aboriginal languages. Below are several basic words and phrases in K’iche’.

Different orthographies have been used to write K’iche’. The classic orthography based on the Spanish orthography has been replaced by a new standardized orthography defined by the ALMG (Academia de Lenguas Mayas de Guatemala). Take a look at Article 1 of the Universal Declaration of Human Rights in K’iche’.