Iranian languages constitute a branch of the Indo-European language family. They are spoken over a wide area of the Middle East. The languages are called Iranian because the largest members of the branch have been spoken on the Iranian plateau since ancient times. 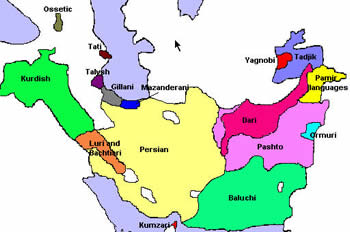 Iranian languages, together with Indo-Aryan languages are thought to have evolved from a common ancestral language called *Proto-Indo-Iranian.

Most scholars subscribe to the hypothesis that the original homeland of Indo-Iranian was an area located northwest of the Indian subcontinent bordered by the Caspian sea in the east and Afghanistan in the north. It is hypothesized that sometime in the 2nd
millennium BC, people who spoke the ancestral Indo-Iranian language migrated to the south and west, settling over a wide area of the Middle East where modern Indo-Iranian languages are presently spoken.

According to Ethnologue, there are 87 Iranian languages, a few of of them now extinct, and many with a very small number of speakers. They are spoken today by 60-80 million people. The table below lists languages with at least half-a-million speakers.

Five Iranian languages have official status in their respective countries.

Modern Iranian languages may have descended from Middle Iranian languages that were spoken between 300 BC and 950 AD. They are usually divided into four groups that reflect the differences in their sound systems, grammar, vocabulary, and sometimes writing.

The sound systems of Indo-Iranian languages share many common features.

Some Iranian languages, such as Pashto and Balochi, have retroflex consonants typical of languages of the Indian sub-continent, such as Urdu and Hindi.

Stress typically falls on the last syllable of the root.

All Iranian languages are inflected, with some elements of agglutination. They add suffixes to roots to express grammatical categories and to form words.

The normal word order in Iranian languages is Subject-Object-Verb. Modifiers follow the nouns they modify.

Iranian languages share most of their basic vocabulary. At the same time, their lexicons reflect the different linguistic and cultural influences of the areas in which they are spoken. Kurdish, for instance, has incorporated a large number of Arabic words; Tajik has borrowed from Russian and Uzbek; Dari has many Pashto loanwords; and Balochi includes many Urdu words in its vocabulary. Most recently, English has become a source of borrowing in all Iranian languages, mainly in the areas of science, technology, politics, and the military.

Below are the numerals 1-10 in several Iranian languages, given in romanization.

Of all the Old Iranian languages only Avestan and Old Persian have left written records dating from the 6th century BC. Avestan is mainly attested through the Avesta, a collection of sacred Zoroastrian texts. Old Persian is attested through numerous inscriptions in the cuneiform script. Today, nearly all the Modern Iranian languages are written in the Perso-Arabic script, an adaptation of the Arabic alphabet. Some of them are written: