Yakut (cаха тыла), also called Sakha, is a member of the Northern Turkic branch of the Altaic language family. Its closest relatives are Shor, Tuva and Dolgan. Yakut is spoken mainly in the Sakha Republic ( formerly Yakut Autonomous Republic) of the Russian Federation near the Arctic Ocean, in a sparsely populated area of 1.2 million square miles with 1 million inhabitants. It is also used by ethnic Yakut people in the Khabarovsk Region of Russia’s Far East, and by a small diaspora in other parts of the Russian Federation, Turkey, and in other parts of the world. The total number of speakers of Yakut is reported to be around 450,000 (Ethnologue).

Most scholars believe that the ancestors of modern Yakut were an ancient Turkic people who inhabited areas around Lake Baikal and Angara River. When they were driven out of their ancestral lands by Mongol invaders, they came to the territory of Yakutia around the 15th or 16th centuries, possibly in several waves. 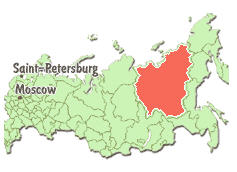 Yakut is the official language of the Sakha (Yakut) Republic along with Russian. Both languages are used as a medium of education in elementary and secondary schools, and in vocational and higher education, in paper and print media, literature and theater. Yakut is used as a lingua franca by some other minorities such as the Even, Evenki, and Yukaghir people. Most Yakuts are bilingual in Russian as well as in a number of neighboring Paleosiberian languages, such as Even, Evenki, and Yukaghir. A small percentage of Russian-speaking residents of the Sakha Republic are also proficient in Yakut.

Yakut dialects are quite similar, so that speakers of different varieties can easily understand each other. There are two basic dialects groups:

The sound system of Yakut is fairly typical of Turkic languages. It is characterized by vowel harmony, a type of phonological process that places limitations on which vowels may be found near each other in a word. There are two kinds of vowels — front vowels, which are produced at the front of the mouth, e.g., /i/, /e/, and back vowels, produced at the back of the mouth, e.g., /u/, /o/. Native Yakut words can contain either only all front or all back vowels, and all suffixes must conform to the vowel of the syllable preceding them in the word. For example, a vowel at the beginning of a word can trigger assimilation of the rest of the vowels in that word.

Yakut has 8 short and 8 long vowel phonemes, i.e., sounds that distinguish word meaning. There is a contrast between unrounded and rounded front and back vowels. The latter are produced with rounded protruding lips. Vowel length distinguishes word meaning. Long vowels are represented in the orthography by double letters. In addition, Yakut has four diphthongs.

With a few exceptions, stress in Yakut words is normally placed on the final syllable. The placement of the original stress in loanwords is usually preserved.

Like all Turkic languages, Yakut is agglutinative, i.e., grammatical relations are indicated by the addition of suffixes to stems. There is a one-to-one relationship between suffix and meaning, so suffixes are strung together one after another. There are various rules for their ordering. Like all Turkic languages, Yakut uses postpositions rather than prepositions to signal certain grammatical relationships.

The normal word order in Yakut sentences is Subject-Object-Verb. However, other orders are possible, depending on discourse-oriented considerations such as emphasis. Adjectives precede the words they modify.

Below are some common words and phrases in Yakut.

Below are Yakut numerals 1-10. They are quite similar to numerals in other Turkic languages.

Take a look at these items from Yakut newspapers.

How difficult is it to learn Yakut?
There is no data on the difficulty of Yakut for speakers of English.