Latvian (latviešu valoda), also called Lettish, belongs to the Baltic branch of the Indo-European language family. It is spoken by about 1.5 million people in Latvia. It is also spoken in Australia, Belarus, Brazil, Canada, Estonia, Germany, Lithuania, New Zealand, Russia, Sweden, Ukraine, United Kingdom, and USA. Ethnologue estimates that about 1.7 million people worldwide claim Latvian as their primary language. Although Latvian’s closest relative is Lithuanian, the two languages are not mutually intelligible. Both are thought to have evolved from a hypothetical common ancestor called Proto-Balto-Slavic. 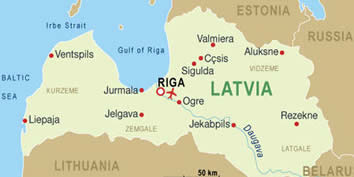 Both Latvian and Lithuanian have retained many features of Proto-Indo-European, especially in their noun systems. Of the two languages, Lithuanian is the more conservative, having retained more archaic forms than Latvian.

Latvian is the official language of the Republic of Latvia. It was given the status in 1989, two years prior to the country’s independence from the former Soviet Union in 1991. Today, Latvian is used in all official spheres of activity. It is the dominant language of the mass media, although Russian, English, Swedish, and other minority languages are also used in newspapers and broadcasts. Latvian is used in the school system at all levels. Russian and English are also used in addition to Latvian at the university level. The Latvian-speaking population also speaks Russian, Lithuanian, Polish, or Estonian, depending on the area of the country.

Despite the small size of the country, Latvian has several mutually intelligible regional dialects. There is some disagreement as to their classification. Latvian scholars traditionally divide them into two groups, namely:

The description below pertains to Standard Latvian.

Latvian has 27 consonants, some of which can be unpalatalized or palatalized. Voiceless stops are not aspirated, as in English. In writing, it is marked by a dot under the consonant. Consonants in parentheses occur only in loanwords.

Latvian is a highly inflected language with a complex grammar.

Latvian nouns are marked for the following categories:

Latvian verbs agree with their subjects in person and number. They are marked for the following categories:

Basic vocabulary is inherently Latvian, but the language has numerous borrowings from German, Polish, Swedish, and Russian since Latvia had been annexed by these countries over different periods in its history. Below are some common phrases and words in Latvian.

Below are the Latvian numerals 1-10.

The oldest known examples of written Latvian come from a 1530 translation of hymns made by Nicholas Ramm, a German pastor in Riga. Secular texts did not appear until the 17th century. Historically, Latvian was written with the Latin alphabet, following German spelling patterns. This system was replaced in 1908 by a system designed to more adequately represent the sound system of Latvian. There is a good one-to-one correspondence between letters and phonemes, i.e., sounds that make a difference in word meaning. The modern Latvian standard alphabet consists of 33 letters given below in their printed form.

Take a look at Article 1 of the Universal Declaration of Human Rights in Latvian.