Kyrgyz (Kyrgyz tili, Кыргыз тили) is a member of the Turkic branch of the Altaic language family. The earliest reference to the Kyrgyz people, who were living in the Upper Yenisey region in north-central Mongolia, is found in a 9th century Orkhon inscription discovered during an 1889 expedition to the Orkhon Valley monuments in Mongolia.

The spread of the Mongol Empire in the 13th century caused the Kyrgyz people to migrate south and settle in the area of present day Kyrgyzstan. Numerous Turkic and Mongol invasions forced some Kyrgyz people to migrate to Turkestan. By the mid-18th century, the Kyrgyz were under Chinese control. After Kyrgyzia was forcibly incorporated into the Russian Empire, some Kyrgyz speakers migrated to Afghanistan. In 1936, Kyrgyzia became a Soviet Socialist Republic of the USSR. After the breakup of the Soviet Union in 1990, Kyrgyzstan became an independent Republic of Kyrgyzstan. 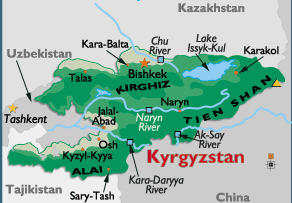 Today, Kyrgyz is spoken by 2.45 million people in the Republic of Kyrgyzstan where it is the national language. Many Kyrgyz speakers in Kyrgyzstan also speak Russian. Kyrgyz is also spoken in Afghanistan, China (close to half-a-million speakers), Kazakhstan, Mongolia, Pakistan, Tajikistan, Turkey, and Uzbekistan. The worldwide population of Kyrgyz speakers is estimated at 2.9 million (Ethnologue).

Kyrgyz was not standardized until the Soviet period, when it was used along with Russian for official and governmental purposes. Under the Soviet regime, literacy rates in Kyrgyz rose sharply from under 5% in the 1920’s to almost universal literacy in the 1970’s. At the same time, the percentage of Kyrgyz speakers in the Kyrgyz republic dropped considerably due to the influx of settlers from other parts of the USSR, most of them Russians. There was no Kyrgyz press prior to 1917, but by the mid-1980s, Kyrgyz publications flourished with numerous newspapers, magazines and books, in addition to radio and television.

After gaining its independence from the Soviet Union in 1990, Kyrgyzstan attempted to pursue a policy of de-russification. Although the policy has not been fully carried out, today, instruction in Kyrgyz is available through the secondary-school level. Kyrgyz is also used as a medium of instruction in some courses at the Kyrgyz National University. The language is widely used in electronic and written media.

Kyrgyz has eight vowel phonemes, i.e., sounds that make a difference in word meaning. The vowel system is very similar to those of other Turkic languages. As all other Turkic languages, Kyrgyz is characterized by vowel harmony, a type of phonological process that involves constraints on which vowels may be found near each other in a word. Vowels in Kyrgyz words must harmonize with one another in terms of front versus back, and rounded versus unrounded. For example, if the first vowel in a word is a front rounded vowel such as /y/ or /ø/, then all other vowels in that word must also be /y/ or /ø/ since these are the only two front rounded vowels in Kyrgyz.

Kyrgyz has 19 consonant phonemes, i.e., sounds that serve to distinguish word meaning. There are no consonant clusters at the beginning or at the end of words. Voiced obstruents are devoiced at the end of words, e.g., kitebi ‘book’ (accusative case) becomes kitep ‘book’ (nominative case). Consonants in parentheses occur exclusively in loanwords

Stress in Kyrgyz words normally falls on the last syllable.

Like all Turkic languages, Kyrgyz is agglutinative, i.e., grammatical relations are indicated by the addition of suffixes to stems. There are no prefixes. There is a one-to-one relationship between suffixes and their meanings, so that suffixes are strung together one after another, sometimes resulting in long words. There are various rules for the ordering of suffixes. Kyrgyz uses postpositions rather than prepositions to signal grammatical relationships.

Verbs agree with their subjects in person and number. They are characterized by the following grammatical categories:

Word order in Kyrgyz sentences is normally Subject-Object -Verb. However, other orders are possible, depending on discourse-oriented considerations such as emphasis.

Kyrgyz lexicon is basically Turkic with borrowings from Arabic, Persian, and Russian. It also has has some international words which came into the language mostly by way of Russian.

Below are a few words and phrases in Kyrgyz.

Below are the numerals 1-10 in Kyrgyz.

Over time, Kyrgyz has been written in several different scripts.

Take a look at Article 1 of the Universal Declaration of Human Rights in Kyrgyz in Cyrillic and Latin scripts.