Chinese languages/dialects constitute an independent branch of the Sino-Tibetan language family. About one-fourth of the world’s population speaks some variety of Chinese as their native language. By the sheer number of its speakers, the antiquity of its unbroken documented written history, its cultural significance, and its influence on other languages, Chinese is one of the most important languages in the world.

Click on the MLA Interactive Language Map to find out where Chinese (all dialects) is spoken in the United States. 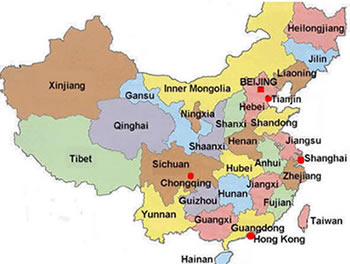 Standard Mandarin is the official standard of the People’s Republic of China, the Republic of China (Taiwan), and one of the official languages of Singapore. The governments of these countries intend for speakers of all Chinese speech varieties to use it as a lingua franca. It is used in government, in the media, and in education.

The identification of the varieties of Chinese as languages or dialects is a controversial issue. Some call Chinese a language and its subdivisions dialects, while others call Chinese a language branch and its subdivisions languages. The Chinese themselves refer to all forms of spoken Chinese as dialects. This perception is reinforced by a common cultural and political identity and by a common writing system with deep historical roots.

Chinese is distinguished by a great deal of internal diversity. To date, some 1500 varieties of spoken Chinese have been identified. Many variants of spoken Chinese are different enough to be mutually incomprehensible. In fact, the intelligibility between any two of the Chinese dialects is less than that between any two Romance languages. Furthermore, the dialects themselves are far from uniform. There is a great deal of variation within the dialects themselves which also affects intelligibility.

Chinese is usually classified into these major dialect groups:

Every syllable in Chinese has a pitch that is an integral part of the pronunciation of that syllable. Pitch distinguishes one syllable from another. The Romanization system adopted by the government of the People’s Republic of China, called Pīnyīn, represents tones by diacritical marks over vowels. Dialects differ from each other both in the number and the quality of tones. For instance, Mandarin has four tones, while Cantonese has six. As an example, the syllable ma in Mandarin can be written in the following four ways that indicate tones:

This means that no dialect allows consonant clusters, and all dialects allow only a few consonants (mostly nasals) at the end of syllables.

All Chinese dialects are predominantly isolating, or analytic, meaning that for the most part, words have only one grammatical form. Grammatical functions are expressed through word order, particles, prepositions, and discourse, rather than by suffixes attached to nouns or verbs, such as in Indo-European languages. Because of the lack of inflections, Chinese grammar may appear quite simple compared to that of Indo-European languages.

Mandarin nouns are not marked for number, gender or case. Below are some of the most frequent noun markers.

Mandarin verbs are not marked for person and number. The most important verb category is aspect. The perfective aspect is marked by the suffix -le, e.g., wŏ chī-le sān-wăn fàn ‘I eat [perfective marker] three [classifier] rice’.

There is a set of particles that occur at the end of sentences. For instance, the particle ma placed at the end of a sentence changes statements into questions, e.g., tā chī-le ‘He/she ate’ and tā chī-le ma? ‘Has he eaten?’

Chinese is a topic-prominent language. This means that the topic of the sentence, defined as old or known information, precedes comment, i.e., new or added information. This is illustrated by an example from Mandarin below.

Chinese dialects share a major portion of their vocabulary, although there are some regional differences. Foreign words and concepts are adopted by creating new compound words that translate the concept behind them. For example, the Mandarin word for computer is diànnao, ‘electric brain’, the word for telephoneis diànhuà, literally ‘electric speech’. Transliteration of borrowed words does not work very well in Chinese because Chinese characters are not well-suited to represent foreign sounds, and because the pronunciation of characters differs from dialect to dialect.

Most Chinese words are made up of one or two morphemes. Grammatical categories such as number, person, case, tense, and aspect are not expressed by inflections. The most common word building devices are described below with examples from Mandarin.

Below are some common words and phrases in Mandarin.

Below are the numerals 0-10 in Mandarin.

Written Chinese has an unbroken history dating back to 1,500 BC. There are several main periods in the history of Chinese writing.

Chinese writing is the oldest writing system in the world that has hardly changed in the last 4,000 years. It is thought to have originated as pictures around 2,000 BC. The earliest known logographs were inscribed on oracle bones. Some of them resembled the objects they attempted to represent. But even so, it was a real writing system and not just a series of pictures.

The precise number of characters in existence is disputed. Historically, estimates range from 40,000 to 80,000, but fluency in reading requires knowledge of approximately 3,000-5,000 characters. Modern dictionaries contain only up to about ,8500 characters, and 7,000 characters are a typical set for newspaper fonts.

The Chinese writing system is well-suited for the language because the same words are pronounced quite differently in different parts of China. For instance, the word for man is pronounced as ren, yen, nyin, or len in different regions of China, but it is written everywhere as

. This symbol can be understood by speakers of all Chinese dialects regardless of how they may pronounce it. In this way, the Chinese writing system is a unifying factor for all speakers of this largest language community in the world.

Click here to find out more about the origin of Chinese characters.

Each character has a fundamental component, or radical. There are 214 different radicals. Characters are categorized according to their radical. They are then further subcategorized according to their total number of strokes. Each character is made up of a number of strokes, or single movements of the writing instrument, originally a brush, which must be written in a prescribed order. Stroke order refers to the numerical order in which strokes are written. The number of strokes per character ranges between one and thirty. Characters with more than thirty strokes are extremely rare. This principle of categorization is used by everybody who must learn to read and write Chinese characters because it is easier to memorize the enormous number of characters if they can be broken down into a smaller number of constituents.

Click here to find out more about stroke order rules and different types of strokes
Click here to see animated presentations of how characters are formed.

There are five different processes that explain how the characters were created.

Roughly 600 Chinese characters are pictographs. They are stylized depictions of objects in the real world and are among the oldest characters in Chinese. They were originally inscribed on stone tablets, bones, and tortoise shells. The evolution of two pictograms is illustrated below (from Wikipedia).
Click on Omniglot and Ancient Scripts for more detailed information.

Ideographs are characters derived from symbols representing abstract concepts. For example, the symbols for ‘above’ and ‘below’ have become characters

Ideograms are designed to represent relatively abstract ideas, usually by combining several pictograms into a compound whose meaning can be quite arbitrary, as in the example below.

Over 90% of Chinese characters were created by combining a character with a related meaning with another character that indicates its pronunciation. This practice appeared relatively late in the development of Chinese writing as the number of homophones (words pronounced identically) uncreased. Phonetic compounding is the standard method for creating new characters today. For example, the character meaning ‘washing one’s hair’ is composed of the character for ‘tree’, because it sounds the same, and the radical for ‘water’ because it is semantically related to washing. The phrase ‘to wash one’s hair’ (mù) is pronounced the same as the character mù ‘tree’.

Loan characters are the result of borrowing a character for a word whose pronunciation is that of another word represented by that character. For example, the character

yì which means ‘easy’ today, formerly stood for ‘scorpion’ because ‘easy’ and ‘scorpion’ had the same pronunciation.

The movement to simplify Chinese characters started in the 1890s but did not become an official policy until the 1950s as part of a state-wide campaign to facilitate literacy. Simplification involves a reduction in the number of strokes of commonly used characters. About 2,000 characters have been simplified. Here is an example.

Pīnyīn
Hanyŭ Pīnyīn was officially adopted in Mainland China in 1958 to romanize Mandarin. It has been used primarily for teaching Standard Mandarin as a second language/dialect. It is also used in Singapore and Taiwan, and has been adopted by much of the international community as a standard for writing Chinese words and names in the Roman alphabet. The value of Hanyŭ Pīnyīn lies in the fact that China has thousands of distinct dialects, though there is just one common written language and one common standardized spoken form.

Take a look at Article 1 of the Universal Declaration of Human Rights in traditional characters, simplified characters, and in Hanyŭ Pīnyīn. Traditionally, Chinese was written vertically in columns arranged from right to left, but it is common nowadays to write it in horizontal lines from left to right, as is the case below.

English has borrowed many words from Chinese, many of them from Cantonese spoken in the province of Guǎndōng and the city of Guăngzhōu (Canton), as well as in Hong Kong, and in expatriate Chinese communities and Chinatowns in Southeast Asia, Europe, and the United States. For this reason, many Chinese loanwords made their way into English through Cantonese.