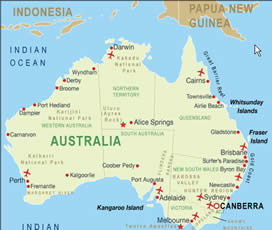 European contact is difficult to establish because it is often impossible to distinguish between dialect and language and because many varieties became extinct before they could be recorded and analyzed since the Aboriginal people were forced to give up their languages and learn English. In addition, the great length of time over which the Aboriginal languages have developed makes the reconstruction of their common ancestor extremely difficult.

It is estimated that today there are 170,000 Australians of Aboriginal descent, of whom about 50,000 have some knowledge of one of the surviving Aboriginal languages. Population estimates are hampered by the fact that Aboriginal people often live in isolated areas and that most of them are bilingual with varying degrees of proficiency in their Aboriginal languages.

The future of the Aboriginal languages is uncertain since most of them are endangered or on the brink of extinction, but the good news is that the Aboriginal people as well as Australian society as a whole are concerned about the loss of these languages. The influence of English is so strong that the very existence of languages is being threatened. An effort to record and analyze the surviving Aboriginal languages was initiated in the early 1970s so that grammars or grammatical sketches of some 100 languages are available today. This has provided an incentive for Aboriginal groups across Australia to have their languages taught to children in school.

There is considerable similarity among the sound systems of Aboriginal Australian languages. These similarities may be due to geographical proximity and language contact, rather than to common ancestry. For instance, consonant clusters are restricted, and most syllables end in a vowel.

Most Australian languages have three vowel phonemes, i.e., sounds that make a difference in word meaning. The vowels are typically /i/, /a/, /u/. They can be short or long. Vowel length makes a difference in word meaning. Long vowels are usually represented in writing by double letters. e.g., in Warlpiri, mirnta means ‘flu’ while miirnta means ‘hardwood shield’. Most languages have progressive and regressive vowel harmony, i.e., assimilation of the first vowel to the following vowel and vice versa, e.g., in Warlpiri, karli ‘boomerang’ + –ngku ‘ergative’ = karlingki.

Below are some features typical of many, but not all, Aboriginal Australian languages:

Nouns in Australian languages have the following distinguishing features:

Registers
One of the most unusual aspects of Australian languages is the influence of kinship on speech registers, i.e., language varieties used for particular purposes or in particular social settings.

An unusual feature of all Australian languages is their free word order made possible by the fact that verbs incorporate all syntactic information that is necessary for the interpretation of sentences. Word order is influenced by pragmatic considerations, such as topic (known, or old information) and focus (new or important information).

The Aboriginal languages have been unwritten prior to the arrival of English settlers. Alphabets for these languages were eventually developed by individuals with no linguistic training who were working in the absence of phonemic analyses of the sound systems of these languages. As a result, early writing systems were reflections of English spelling conventions rather than accurate representations of the meaningful sound contrasts of Aboriginal languages. Linguists working with Australian languages today are attempting to rectify the situation by developing practical orthographies that more accurately represent the sound systems of Aboriginal languages. For example, Warlpiri which has been written with the Latin alphabet since the1950s, has had its alphabet revised since then. Pitjantjatjara has been written with the Latin alphabet since the 1940s. Its spelling system was standarized in 1987 with the publication of a Pitjantjatjara–English dictionary. However, most Aboriginal languages do not yet have standardized orthographies.

Below is a sample text in Warlpiri.

How difficult is it to learn Indigenous Languages of Australia?
There is no data on the difficulty of Australian indigenous languages for speakers of English.