Tatar (Tatar tele, Tatarça, Татар теле, Татарча) belongs to the Western Turkic branch of the Altaic language family. Its closest relatives are Bashkir (Bashkort) and Chulym. It is not the same language as Crimean Tatar (Ethologue).There are 5.2 million speakers of Kazan Tatar most of whom live in the Russian Federation and in the former Soviet republics. Majority of the Tatar-speaking population is concentrated in the Republics of Tatarstan and Bashkortostan in the central Volga region as well as in Moscow, St.Petersburg and elsewhere (Ethnologue). Tatar is the largest minority language of the Russian Federation.

There are two main theories concerning the origins of Tatars of Tatarstan which continue to be a topic of scholarly debate. According to one theory, the Volga-region Tatars are direct descendants of the Tatars of the Golden Horde. 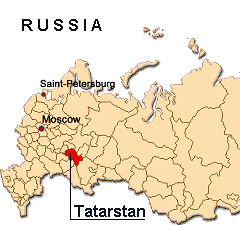 Another theory holds that the ancestors of these Tatars were Bulgars, a Turkic people who were displaced from the Azov steppes by Arab raiders and who settled in the Middle Volga region in the 8th century and converted to Islam in 922. After the Mongol invasion of Europe in 1241, Volga Bulgars were absorbed into the Golden Horde. The Kazan Khanate which succeeded the Golden Horde was annexed by Russia in 1552.

In 1917, Tatar was made a de facto official language of the Tatar–Bashkir Soviet Socialist Republic (the USSR did not recognize official languages other than Russian). However, as a result of the intense russification campaign of the Stalin era, the use of Tatar declined. The language was taught only in rural schools, while all higher education was in Russian. Today, Tatar is the official language of the Republic of Tatarstan, along with Russian. Most Tatars are bilingual in Tatar and Russian. Although it is not an endangered language today, Tatarhas lower prestige than Russian. Higher education in Tatar is offered in Tatarstan universities but not on all areas. Outside of Tatarstan, they tend to speak Russian as their first language. This is particularly true of Tatars who reside in large cities. On the other hand, Tatar is the only language in use in rural districts of Tatarstan. Overall, Tatar is primarily a spoken language, and there is evidence that the number of first-language speakers of Tatar as well as their proficiency in the language continues to decline as more and more young people switch to Russian.

Tatar is characterized by a richness of dialects, due to the complexity of the history associated with the Tatar diaspora. There are three main dialects of Tatar (Ethnologue). They can be further subdivided according to the geographic areas in which they are spoken. The differences among the dialects are mostly phonological. For the most part, the dialects are mutually intelligible.

The sound system of Tatar is characterized by vowel harmony, a phonological process that limits which vowels may be found near each other in a word. There are two kinds of vowels — front vowels, produced at the front of the mouth, e.g., /i/, /e/, and back vowels, produced at the back of the mouth, e.g., /u/, /o/. Native Tatar words can contain either only all front or all back vowels, and all suffixes must conform to the vowel of the syllable preceding them in the word. For example, a vowel at the beginning of a word can trigger assimilation of the rest of the vowels in that word.

Tatar has 12 vowel phonemes, i.e., sounds that distinguish word meaning. There is a contrast between unrounded and rounded front and back vowels. Rounded vowels are produced with rounded protruding lips. Some of the vowels are not native to Tatar and occur only in borrowed words.

Some consonants are not native to Tatar and occur only in borrowed words, e.g., /f/, v/ and /z/. Syllables in Tatar can end in a vowel or one or two consonants. There are no initial consonant clusters. Final consonants may be devoiced.

Stress in Tatar words is normally placed on the final syllable. There are a number of exceptions. In recent loanwords the placement of the original stress is usually preserved.

Like all Turkic languages, Tatar is agglutinative, i.e., grammatical relations are indicated by the addition of suffixes to stems. There is a one-to-one relationship between a suffix and its meaning, so suffixes are strung together one after another, resulting on occasion in long words. There are various rules for their ordering. Tatar uses postpositions rather than prepositions to signal certain grammatical relationships.

Verbs agree with their subjects in person and number. They have the following grammatical categories:

The normal word order in Tatar sentences is Subject-Object-Verb. However, other orders are possible, depending on discourse requirements such as emphasis. Adjectives precede the words they modify.

The basic vocabulary of Tatar is Altaic in origin. Principal mechanisms of word formation are derivational suffixes. The language has a large number of loanwords, mostly from Russian, e.g., universitet ‘university’, gazeta ‘newspaper’, par ‘steam’, stakan ‘glass’. There are also numerous loanwords from Arabic, e.g., taraf ‘side’, Persian, e.g., atna ‘week’, and Mongolian, e.g., uram ‘street’. Tatar has as many as 800 onomatopoeic words, e.g., bak-bak ‘quack-quack’.

Below are some common words and phrases in Tatar.

Below are Tatar numerals 1-10.

Tatar has a long history of being written with different alphabets:

The official Cyrillic alphabet used in Tatarstan today contains 29 letters which are given below in their traditional order.

The adapted version of the 2001 Latin alphabet for writing Tatar is given below.

Take a look at Article 1 of the Universal Declaration of Human Rights in Tatar in Cyrillic and Latin scripts.

How difficult is it to learn Tatar?
There is no data on the difficulty of Tatar for speakers of English.