The Austro-Asiatic language family consists of 169 languages spoken in Southeast Asia, in countries located between China and Indonesia. A few are spoken to the west of this area in the Nicobar Islands and in India. The austro– part of the name comes from the Latin word for ‘south.’

It is not known where the speakers of Austro-Asiatic languages came from or when they migrated to this part of the world. It is generally conjectured that they originated in southern or southeastern China some time between 2,000-2,500 BC, and migrated south into the Indo-Chinese peninsula and west into India. Invasions by speakers of other languages split the Austro-Asiatic languages into several groups. The date of separation of the two main Austroasiatic subfamilies—Mon-Khmer and Munda—has never been definitively established and must have occurred in prehistoric times. 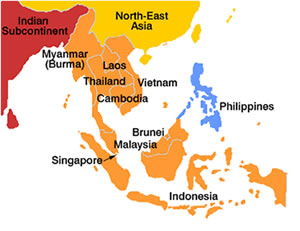 Because of their separation from each other and because they were surrounded by other languages, Austro-Asiatic languages exhibit great diversity. For instance, The Munda branch has been influenced by synthetic, non-tonal Indo-Aryan languages, while the Mon-Khmer branch was influenced by analytic, tonal languages of China. As a result, the two branches have evolved in different directions which makes the reconstruction of their common ancestor extremely difficult.

Many Austro-Asiatic languages are found only in isolated communities and are highly endangered. Only 24 (14%) of the 169 languages have over 50,000 speakers, and only 3 of them over 1 million speakers.

Vietnamese and Khmer have official status in Vietnam and Cambodia, respectively. The rest of the languages are spoken by minority groups. Both Vietnamese and Khmer are taught in schools and used in all aspects of personal and public life. Speakers of most other Austro-Asiatic languages are under social, political, and economic pressure to become bilingual in the official languages of the country in which they live. Most groups are too small or too scattered to gain official recognition.

Most Austro-Asiatic languages languages have numerous dialects. In addition, due to lack of adequate descriptions, there are many languages whose status as independent entities as opposed to being dialects of one language, has not been established.

Austro-Asiatic languages do not have tones, but have a large variety of vowels. The sound systems of Mon-Khmer and Munda branches have diverged considerably under the influence of Chinese and Indo-Aryan languages respectively. Nevertheless, they share some common features:

There are significant differences between the the grammatical features of Mon-Khmer and Munda languages.

Munda languages were heavily influenced by the surrounding Indo-Aryan languages. They differ from Mon-Khmer languages in complexity of morphology.

Below are a few words and phrases in Khmer and Vietnamese.

Below are numerals 1-10 in Khmer and Vietnamese.

The Old Mon and Old Khmer scripts were the earliest writing systems of Southeast Asia.They are attested in a number of official inscriptions on monuments in Myanmar (Burma), Cambodia, and Thailand that date back to the 7th century AD. The two scripts were based on the Pallava script used by the Tamil people of South India which, in turn, descended from the Brahmi script of India. Both scripts were modified to suit the phonology of their languages. Eventually, other people used the two scripts as a basis for their own writing systems. Thus, Thai speakers use Khmer letters, and Burmese speakers use Mon letters.