Basque, (Euskara, in Basque), is one of a handful of non-Indo-European languages with a home in Western Europe. Others include Estonian, Finnish, Hungarian, Sami, and Maltese. It is a language isolate, i.e., it has no known relatives anywhere in the world. This has led to a number of hypotheses regarding its origin. The prevailing theory is that an early form of Basque was spoken in southwestern Europe before the arrival of Indo-Europeans, perhaps as early as 2,000 years ago. The Basques are believed to have occupied their current territory long before the Celts and the Romans invaded their lands. Their culture dates back to Palaeolithic times, which makes their language the most ancient language of Europe. The name Basque comes from Latin vascones ‘foresters’. Vasconia was the Roman name for the up-country of the western Pyrenees. 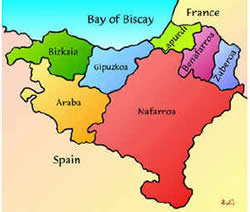 All dialects are mutually intelligible, except for Souletin. The most widely used standardized dialect is Batua (‘unified’ in Basque). It is taught in most schools and used in the media. It is usually referred to as Standard Basque. Although regional varieties are sometimes preferred for oral communication, there is a strong desire for the use of the Batua unified standard.

Basque is a richly inflected language. It marks grammatical relations by adding suffixes to roots. Prefixes are relatively uncommon.

Basque nouns are marked for the following categories:

Basque personal pronouns are shown below:

There are three demonstratives, just like in Spanish, representing three degrees of proximity.

Basque verb morphology is quite complex, and only some of its features are listed below.

The basic word order in Basque is Subject-Object-Verb, with some variation. Modifiers precede the nouns they modify.

Most of the basic vocabulary is inherently Basque. As a result of close contact with Latin, Iberian and other languages for over 2,000 years, Basque has borrowed many words from Latin, Spanish, French, Celtic, and Arabic, e.g., libiru ‘book’, boitura ‘car’, kantu ‘song’.

Below are a few basic Basque words and phrases.

Below are Basque numerals 1-10.

The first book in Basque was published in 1545, although there are inscriptions in Basque dating back to Roman times. For centuries, there was no standard orthography, and Basque was written with the Latin alphabet supplemented with symbols to represent sounds not present in Romance languages. In 1964, the Royal Basque Language Academy introduced a new standardized orthography that is now universally used. This alphabet contains the following letters:

Take a look at Article 1 of the Universal Declaration of Human Rights in Basque.

How difficult is it to learn Basque?
There is no data on the difficulty level of Basque for speakers of English.