Cebuano, also known as Binisaya, Bisayan, Sebuano, Sugbuanon, Sugbuhanon, Visayan, is the major language of Visayan islands (Negros Oriental, Cebu, Bohol), and parts of Mindanao in the Philippines. The name comes from the name of the Philippine island of Cebu + 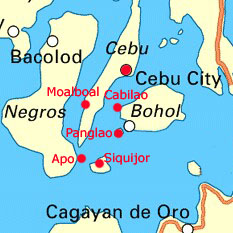 the Spanish suffix –ano meaning ‘native of’. It is a member of the Malayo-Polynesian group of languages within the Austronesian language family.

Ethnologue identifies several dialects of Cebuano, namely, Cebu, Boholano, Leyte, and Mindanao Visayan, although Boholano is sometimes considered to be a separate language.

The sound system of Cebuano is fairly typical of Malayo-Polynesian languages.

Stress in Cebuano can occur on any syllable of a word. The position of stress can distinguish word meaning.

The grammar of Cebuano shares many features with other Austronesian languages of the Philippines such as Tagalog and Ilokano.

Cebuano is a verb-initial language. Adjectives precede the nouns they modify. The order of other constituents that follow the verb is relatively free, but there is a general preference for the subject to precede the object.

Cebuano vocabulary is Austronesian in origin. It shares many words with Tagalog. As a result of Spanish influence, Cebuano also contains many words of Spanish origin, such as names of the days of the week and months. In addition, the language has borrowed words from Chinese, Arabic, and English. Some examples are krus from Spanish cruz ‘cross‘, hayskul from English high school, and prayd tsikin from English fried chicken. In some cases, both the Cebuano and borrowed words exist side by side, such as numerals.

Below are some common words and phrases in Cebuano.

Here are two sets of the numbers 1-10 native to Cebuano and those borrowed from Spanish which are also in use. Spanish is more commonly used for numerals above 10.

Although it is commonly believed that each province in the Philippines had its own ancient alphabet, Spanish writers of the 16th century reported that the practice of writing was found only in the Manila area at the time of first contact. Writing spread to the other islands later, in the middle of the 16th century. The Spaniards usually called the ancient Filipino script “Tagalog letters”, regardless of the language for which it was used.

The so-called “Tagalog letters” were actually a syllabic script called Baybayin, which was used until the 17th century when it was gradually replaced by the Latin alphabet that is still in use today. The word baybayin, from baybay ‘spell’ in Tagalog, means ‘alphabet’. The Baybayin alphabet, probably developed from the Javanese script, adapted from the Pallava script, the latter itself derived from the Brahmi script of ancient India. There is evidence that Baybayin was used for writing in the Visayas, mainly for writing letters, poetry, and incantations. Today, the Baybayin alphabet is used mostly for decorative purposes, although there are attempts to revive its use.

Today, Cebuano is written with the Latin alphabet consisting of 20 letters, representing 5 vowels and 15 consonants. They are given below in their traditional order.

Take a look at Article 1 of the Universal Declaration of Human Rights in Cebuano.

How difficult is it to learn Cebuano?
Cebuano is a Category II language in terms of difficulty for speakers of English.