Bamanankan, also known as Bambara and Bamanakan, is a member of the Mande group of the Niger-Congo language family. It is spoken by 4 million people as a first language and by another 10 million people in Mali and in the neighboring, Côte-d’Ivoire (Ethnologue).

Much of Bamanankan’s history is unwritten and is preserved mainly through oral tradition. What is known is that the Mande people settled the Sahel (including present-day Mali), and formed a succession of Sahelian kingdoms, including the Mali Empire. Mali was invaded by France starting in 1880. In 1959, the union of Mali and Senegal became the Mali Federation, which gained independence from France in 1960. As a 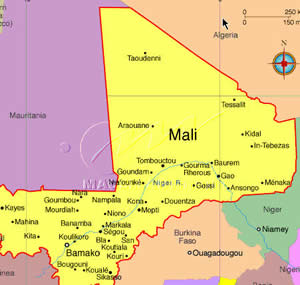 result of the French occupation, Bamanankan orthography and lexicon have been significantly influenced by French.

Although Bamanankan is spoken by 80% of Mali’s population and although it is the most widely used and understood language in the country, it is not the country’s official language which continues to be French. Bamanankan serves as an inter-ethnic lingua franca in Mali and as the lingua franca in Burkina Faso, Côte d’Ivoire, Gambia, Guinea, Mauritania, and Senegal. In Mali, Bamanankan is used in mass communication (radio, newspapers), adult education (French is the official language of instruction in primary school), and in everyday communication.

Bamanankan has many dialects. The main division is between Standard Bamnankan and a variety of rural dialects such as Somono, Segou, San, Beledugu, Ganadugu, Wasulu and Sikasso, all of which are mutually intelligible, differing mostly in pronunciation.

Bambara has 21 consonants, depending on the analysis. They are given below.

Bamanankan is a tonal language. There are two basic tones: a high tone (H), marked with an acute accent, and a low tone (L) marked with a grave accent, e.g., bá ‘mother’ and bà ‘goat’. These tones can appear in different patterns, e.g., kúlúkùtù ‘ball’.

The grammatical structure of Bamanankan is relatively uncomplicated. Most grammatical relations are marked by suffixes or by postpositions which follow the verb and express location, direction, possession, etc.

Bambara nouns have the following characteristics:

Bambara verbs have the following characteristics:

The normal word order in Bambara sentences is Subject-Object-Verb.

Below are some common words and phrases in Bambara.

Below are Bamanankan numerals 1-10.

The N’Ko alphabet is a script devised by Solomana Kante in 1949 as a writing system for the Mande languages of West Africa. It is still used for writing Bamanankan. The N’ko alphabet shows the influence of both Roman and Arabic writing systems. Today, Bamanakan is written in the African reference alphabet, first proposed by a UNESCO-organized conference in 1978. It is a version of the Latin alphabet adapted to represent Bamanankan sounds. Two sounds are represented by two-letter sequences, e.g., kh, sh. There are also additional letters borrowed from the International Phonetic Alphabet (IPA), e.g., ε, ɲ, ŋ, ɔ, Tone is not marked in writing, except to disambiguate otherwise identical words. The alphabet is given below.

Take a look at Article 1 of the Universal Declaration of Human Rights in Bamanankan.

How difficult is it to learn Bambara?
There is no data available on the difficulty of Bamanankan for speakers of English.