Uto-Aztecan stock is one of the largest language groups of North and Central America in terms of population, linguistic diversity and geographic distribution. The northernmost Uto-Aztecan language, Northern Paiute, is found as far north as Oregon and Idaho. In the south, varieties of Nahuatl are spoken as far south as Nicaragua and El Salvador. The most famous of these is Classical Nahuatl, the language of the Aztec Empire of central Mexico.

Ethnologue lists 61 languages as belonging to the Uto-Aztecan stock. Several families of Uto-Aztecan languages are or were spoken in the western part of the United States. These include Comanche, Shoshoni, Tubatubal, Hopi and Tohono O’odham. 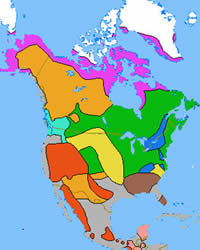 Uto-Aztecan words in English
Several common english words came from Nahuatl. Among them are these words:

Most languages belonging to the Uto-Aztecan language family have four (e.g., Nahuatl) to six vowels (Hopi) that can be either long or short. Their consonant systems have fairly small inventories of phonemes and few consonant clusters.

Click here to listen to the sounds of Cora.

Uto-Aztecan languages are polysynthetic, i.e., many different kinds of affixes (prefixes and/or suffixes) can be added to roots to form very long words. These words function as whole sentences in languages such as English. An example is the word Nemiechmotlajpalfia in Tetelcingo Nahuatl, which means “I greet you honored ones:

Below are some common words in 9 Uto-Aztecan languages.

Prior to the arrival of European settlers in the New World, most Uto-Aztecan languages were unwritten with a few exceptions, such as Nahuatl. Starting in the 16th century, European missionaries took it upon themselves to devise writing systems for these indigenous languages. They encountered some difficulties in trying to represent sounds that were absent in their own Western European languages. As a result, several different orthographies are used to this day to represent these sounds, e.g., long vowels, /k/, and /kw/.