Bulgarian (Бългapcки eзик) belongs to the South Slavic group of the Slavic Branch of the Indo-European language family. It is spoken in Bulgaria by 5.7 million people in Bulgaria. It is also spoken in Canada, Greece, Hungary, Israel, Moldova, Romania, Serbia and Montenegro, Turkey, Ukraine, and the U.S. Ethnologue estimates that the total number of speakers of Bulgarian worldwide is 6.8 million.

The history of the Bulgarian language spans several periods: 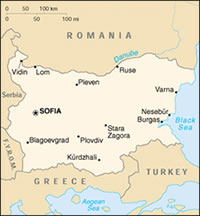 Prehistoric Bulgarian
The prehistoric period occurred between the Slavic invasion of the eastern Balkans and the mission of St. Cyril and St. Methodius to Great Moravia in the 860s.

Bulgarian is the official language of the Republic of Bulgaria. Speakers of Bulgarian constitute the dominant speech community of the country. All aspects of official and social life are conducted in Bulgarian. Bulgarian is the medium of instruction at all levels of education and is used in all electronic and print media.

Contemporary Standard Bulgarian is the official variant of the language. The Palityan dialect is functionally intelligible with Standard Bulgarian (Ethnologue).The Pomak dialect spoken in Greece is a transitional dialect between Bulgarian and Serbian.

The sound system of Bulgarian shares many of its features with other Slavic languages.

Bulgarian has six vowels. Unstressed vowels tend to be shorter than their stressed counterparts.

A distinguishing feature of Bulgarian consonants is that many of them can be either unpalatalized (hard) or palatalized (soft). This distinction makes a difference in word meaning. Palatalization refers to a secondary articulation whereby the body of the tongue is raised toward the hard palate during the articulation of the consonant. In writing, palatalization is indicated by the letters и, е, я, ю written after the consonant. Like all Slavic languages, Bulgarian allows a variety of consonant clusters.

Below is a table of Bulgarian consonant phonemes, i.e., sounds that make a difference in word meaning. The English approximations of the consonants are also indicated.

Stress can fall on any syllable in the word.

During the Middle Bulgarian period (12th-15th centuries), while Bulgaria was part of the Ottoman Empire, the language underwent significant changes. Among them were the loss of the Old Church Slavonic case system, preservation of the complex Old Church Slavonic tense-based verb system (most other Slavic languages simplified the system), and the development of a suffixed definite article (absent in all other Slavic languages). It is thought that these developments resulted from the influence of Turkish, the official language of the Ottoman Empire, as well as of other Balkan languages.

Nouns, adjectives and pronouns are marked for the following categories:

The Bulgarian verb system has preserved many features of Old Slavic, particularly the complex tense system. Verbs are marked for the following categories:

Up to two-thirds of the modern Bulgarian lexicon is based on common Slavic roots shared by the other Slavic languages. The rest of the words were borrowed from other languages, mostly from Greek and Latin, and to a lesser extent from French and Russian. Many loanwords from Turkish, Arabic, and Persian that entered Bulgarian during the long period of Ottoman rule have been replaced by their Slavic equivalents or by borrowings from other languages. In recent years, English has become the main source of borrowing.

Below are a few common phrases in Bulgarian.

Click here to listen to the pronunciation of some common phrases in Bulgarian.

Below are the numerals 1-10 in Bulgarian.

In 886 AD, Bulgaria adopted the Glagolitic alphabet devised by the Byzantine missionaries Saint Cyril and Saint Methodius in the 850s. The Glagolitic alphabet was gradually replaced in the following centuries by the Cyrillic alphabet developed in the beginning of the 10th century. It was modeled primarily on the Greek alphabet with some letters borrowed from the earlier Glagolitic alphabet. At the end of the 18th century, it was replaced by the Russian ‘civil’ orthography, the result of the efforts of Peter the Great, czar of Russia, to modernize all aspects of Russian society, including orthography. In the late 1800s, an alphabet consisting of 32 letters designed by Marin Drinov gained acceptance. It was used until 1945, when another orthographic reform resulted in the current Bulgarian alphabet which has 30 letters. This latest version of the Bulgarian alphabet is given below.

Take a look at Article 1 of the Universal Declaration of Human Rights in Bulgarian.

Click here to hear the text read in Bulgarian.