Hawaiian (ʻŌlelo Hawaiʻi) s a member of the Oceanic group of Malayo-Polynesian branch of the Austronesian language family. The Oceanic group spreads over a large triangular area in the Pacific Ocean from Hawaii to New Zealand to Easter island. While Hawaiian is related to other Polynesian languages such as Samoan, Fijian, Tahitian and Maori, they are not mutually intelligible.

It is thought that Marquesan or Tahitian seafarers settled in the Hawaiian Archipelago around 1000 AD. Linguistic evidence points to the genesis of the Hawaiian language from the language of these settlers some 10 centuries ago. 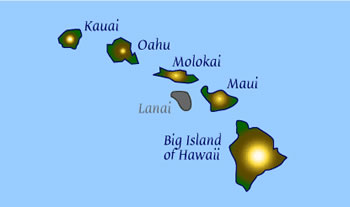 Until the arrival of Captain Cook in 1778, followed by American missionaries in 1820, Hawaiian was the only language spoken in the Hawaiian islands. Since Hawaiian was a strictly spoken language, the missionaries developed a Roman-based writing system for it. The 19th century, when Hawaii was an independent kingdom, was the golden age of the Hawaiian language: literacy rates were high, dozens of newspapers were published in Hawaiian, many religious and literary works were translated into Hawaiian, and traditional oral literature was transcribed.

However, increased travel to and from Hawaii during the 19th century brought diseases, such as smallpox, influenza, and leprosy, that killed large numbers of native speakers of Hawaiian. At the same time, the number of native speakers of other languages, especially English, Chinese, Japanese, Portuguese, and Ilokano, continued to grow. As a result, the actual number, as well as the percentage, of native speakers of Hawaiian in the local population declined sharply. English gradually replaced Hawaiian as the medium of instruction in schools, especially after Hawaii’s conversion to U.S. territorial status in 1899.

Hawai‘i is the only state in the U.S. that has designated a native language, Hawaiian, as one of its two official state languages. In 1978, Hawaiian was made an official language of Hawaii, along with English. Formerly considered critically endangered, Hawaiian is currently rebounding due to a resurgence of interest in Hawaiian language and culture. Hawaiian classes are popular at all levels of education. Hawaiian language programs are offered at at the University of Hawai‘i Honolulu and Hilo campuses. Due to its isolation, the island of Niihau, located off the southwest coast of Kauai is the one island where Hawaiian is still spoken in daily life.

Most dialectal variations have been lost, except for the Niihau dialect.

Hawaiian has only 8 consonant phonemes.

As is the case in all Austronesian languages, Hawaiian words are not inflected. They consist of content words (roots) and particles that are added to roots to indicate grammatical functions. Hawaiian also relies on reduplication to express plurality, frequency, or augmentation.

The normal word order in Hawaiian sentences is Verb – Subject – Object. A common process in Hawaiian is topicalization, i. e., the placement of components that are the topic or focus, at the beginning of utterances.

Hawaiian vocabulary is Polynesian in origin, but the language has also borrowed words from English, Portuguese, Japanese, Chinese, and Ilocano. Many of the loanwords have to do with imported foods, rituals, clothes, and everyday items.

Here are a few common phrases and words in Hawaiian.

Below are the numerals 1-10 in Hawaiian (for counting in series).

The Hawaiian alphabet (ka pī āpā Hawaiʻi) was created during the 1820-1826 period by missionaries from the U.S. mainland. The first publication in Hawaiian appeared in 1822. The alphabet was revised in 1826 when some redundant letters were eliminated. The current Hawaiian alphabet is given below. The vowels are always listed first.

Take a look at Article 1 of the Universal Declaration of Human Rights in Hawaiian.

A number of Hawaiian words have entered the American English lexicon. Here are just a few of them,

How difficult is it to learn Hawaiian?
There is no data on the difficulty level of Hawaiian for speakers of English.