Cherokee (Tsalagi) belongs to the Iroquoian language family. The name of the language occurs in several forms. The form Cherokee came from the Eastern, while the form Tsalagi came from the Western dialect. Today, all Cherokee people refer to themselves as tsa-la-gi. Cherokee speakers constitute the seventh-largest group of speakers of native languages north of Mexican border. It is spoken by 15,000 to 22,500 people in eastern and northeastern Oklahoma, Cherokee Reservation; Great Smokey Mountains; and western North Carolina (Ethnologue). Linguists believe that the Cherokee people migrated to the southeast from the Great Lakes region about three thousand years ago. Despite the three-thousand-year geographic separation, the Cherokee language today still shows some similarities to the languages spoken around the Great Lakes, such as Mohawk, Onondaga, Seneca, and Tuscarora..

In 1540 the Cherokee lay claim to a 40,000 square-mile territory that today partly includes the states of Alabama, Georgia, North Carolina, South Carolina, Virginia, West Virginia, Kentucky and Tennessee. In the late 18th century, some Cherokee were paid a fee to voluntarily migrate west, but most of them remained on their ancestral lands. In 1838, under pressure from white settlers, Andrew Jackson ordered a forcible removal of some 20,000 Cherokee to Oklahoma, the home of The Cherokee Nation today. Several thousand died along the way, and the forced march became known as the Trail of Tears. The journey is called in Cherokee nu-na-hi du-na tlo-hi-lu-i‘trail where they cried’. Several hundred Cherokee evaded removal by hiding in the mountains of North Carolina. In 1842, they received permission to remain on lands set apart for their use in western North Carolina. These lands today constitute the Qualla Reservation.

Despite the relatively healthy size of the ethnic population, Cherokee is an endangered language. Only about a hundred monolingual speakers of Cherokee are still living. However, increasing numbers of Cherokee descendants are renewing interest in the traditions, history, and language of their ancestors. In some communities in eastern Oklahoma and western North Carolina, Cherokee is now used by speakers of all ages.

At the time of European contact, there were three dialects of Cherokee: Lower, Middle, and Overhill. The Lower dialect which was spoken primarily on the South Carolina-Georgia border, has been extinct for over 200 years. Of the remaining two dialects, the Middle dialect (Kituwah) is spoken by the Eastern band on the Qualla Boundary. The Overhill or Western dialect is spoken by some 9,000 people in Oklahoma. The Western dialect is more widely spoken and written than the Eastern. Both dialects have been influenced by English, with the Western dialect showing some Spanish influence.

Cherokee has a relatively small inventory of phonemes.

Cherokee has 6 vowels which can be either short or long. Vowel length distinguishes the meaning of words. In writing, vowel length is represented by a colon after the vowel. The language has one somewhat unusual vowel: a nasalized schwa /ə̃/ which is represented in writing by the letter v. There is only one diphthong, namely /ai/.

There are 10 consonants in North Carolina Cherokee. Like other Iroquoian languages, Cherokee lacks the labial sounds /p/, /b/, /f/, /v/. The only labial sound is /m/ which occurs only in a few native words and in loanwords from English.

Cherokee syllables may be marked by low, mid, or high pitch in addition to one falling and two rising pitches. However, linguists have not yet reached a consensus about the nature of Cherokee pitch accent. Pitch is usually not marked in writing.

Like many Native American languages, Cherokee is polysynthetic, meaning that many morphemes may be linked together to form a single word. A single Cherokee word may be equivalent to an entire clause in English, e.g., gawonisgo which means ‘he speaks all the time’.

The normal word order in Cherokee is Subject-Object-Verb. Modifiers generally precede the nouns they modify.

Cherokee tends to rely on its own linguistic resources rather than on loanwords. For instance, instead of borrowing the word for ‘airplane’ from English, Cherokee created the word tsi-yu ga-no-hi-li-to-hi, literally ‘the thing that one flies’.

Here are some common words and phrases in Cherokee.

Below are the Cherokee numerals 1-10.

Cherokee was one of the first American Indian languages to have a writing system devised especially for it. In 1821, the Cherokee tribal council approved a Cherokee syllabary created by Sequoyah, a Cherokee speaker who knew only a few words of English. Using printed alphabets of other languages given to him by missionaries, he created a Cherokee syllabary with 85 letters adapted from English, Greek, and Hebrew alphabets. Each symbol represents a syllable usually consisting of a consonant and a vowel. The syllabary is no longer in public use, although there are efforts to revive its use for a greater variety of purposes. 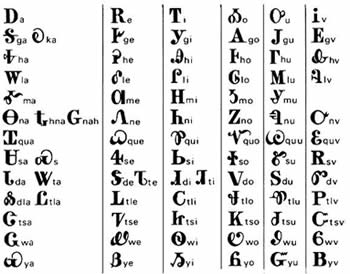 Below are Cherokee numerals 1-10.

Take a look at Article 1 of the Universal Declaration of Human Rights in the Cherokee syllabary and in transliteration.

How difficult is it to learn Cherokee?
There is no data on the difficulty of Cherokee for speakers of English