Click here to see where Polish is spoken in the U.S. 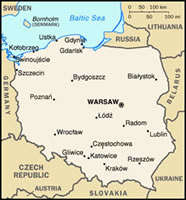 After the First Partition of Poland in 1772 by Prussia, Austria, and Russia, Poland disappeared from the map. The partitioning countries tried to replace Polish with German or Russian. Polish was restored as the official language of the Polish state after the First World War. Today, Polish is the national language of Poland, one of the most linguistically homogeneous countries of Europe, with over 90% of its population who consider Polish to be their first language. It is used in all official, social, and personal situations.

Polish has a number of mutually intelligible dialects. The main ones include:

Polish has a relatively simple vowel system and a complex consonantal system.

There are five oral and two nasal vowels the latter retained from ancestral Proto-Slavic. In script, nasal vowels are marked by a diacritic called ogonek ‘little tail,’ e.g., /ɛ̃/ written as ę , and /ɔ̃/ written as ą.

Stress in Polish words falls mostly on the penultimate (next to the last) syllable in a word.

Polish is a richly inflected language with a grammar that is similar to that of other Slavic languages.

Polish nouns and adjectives are marked for gender, number, and case. The three are fused into one ending, as is the case in all Slavic languages. Polish nouns have the following grammatical categories:

Most of Polish vocabulary is derived from Common Slavic roots that are shared by all Slavic languages. In addition, Polish has been influenced over the centuries by a number of languages, especially Old Church Slavonic, Latin, Greek, German, French, Ukrainian, Belarusian, and Russian.

Most of Polish vocabulary is derived from Common Slavic roots shared by all Slavic languages. In addition, Polish has been influenced over the centuries by a number of languages, including Old Church Slavonic, Latin, Greek, German, French, Ukrainian, Belarusian, and Russian.The spelling of loanwords was usually changed to accommodate Polish pronunciation, and various suffixes were added to create nouns, adjectives, and verbs. When borrowing international words, Polish often changed their form. For example, the Latinate suffix -tion becomes –cja in Polish, e.g.,inauguration becomes inauguracja.

Here are a few common phrases and words in Polish.

Below are the Polish numerals 1-10.

Polish is first attested in 9th century documents written in medieval Latin. Whole Polish texts started to appear in the 16th century, including the first printed book in Polish in 1513. The 16th century also saw the appearance of the first Polish dictionaries and grammars. Since Poland was predominantly Roman Catholic, it was natural for the Polish alphabet to be was based on the Latin, rather than on the Cyrillic alphabet. The language uses an adapted and expanded version of the Latin alphabet. Because Polish has many sounds that were absent in Latin, many diacritics and combinations of letters were designed to represent them. The result is an alphabet replete with diacritics.

Below are the letters of the modern Polish alphabet.

Take a look at article 1 of the Universal Declaration of Human Rights in Polish.

Listen » Recording of the UDHR in Polish

Here are a few words English has borrowed from Polish: