Navajo ( Diné Bizaad ), also known as Diné, belongs to the Athabaskan branch of the Na-Dené language family. Most of the Diné homeland is in northern Arizona, but it also extends into southern Utah and northwestern New Mexico. 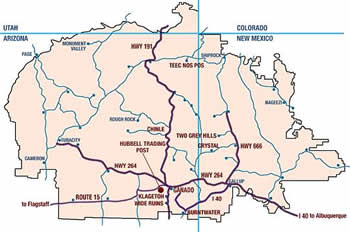 It is the largest language of the Na-Dené language family.

With some 170,000 speakers, Navajo is one of the few North American Indian languages with a growing population of speakers (Ethnologue). According to the 2010 census, there were only 7,600 monolingual speakers of Navajo. In urban areas, younger Navajos tend to shift to English.

It is the policy of the Navajo Nation to work towards the acceptance of the Navajo language in all areas of contemporary Navajo life and to promote its use in education in pre-school and K-12.

There are some slight regional variations in pronunciation and vocabulary among the varieties of Navajo spoken in Arizona, New Mexico, and Utah.

Navajo has a rich inventory of consonants. Among the most salient features of Navajo consonants are the following:

Navajo syllables are marked by one of four tones: high, low, rising, and falling which are indicated in writing in the following way:

Navajo is an agglutinating, polysynthetic language. However, many of its affixes combine in much the same way as in synthetic languages. Navajo tends to have more verbs than other parts of speech. For instance, Navajo verbs are used for adjectival functions.

Like other Na-Dené languages, Navajo tends not to borrow words from other languages. Instead, it uses native elements to create new words. For instance, the Navajo word for telephone is béésh be hane’é which literally translates as ‘instrument, with it talking takes place’.

Below are a few basic words and phrases in Navajo.

Below are Navajo numerals 1-10.

Navajo was an unwritten language prior to the middle of the 19th century. However, by the beginning of the 20th century, a number of religious texts, grammars, and dictionaries were compiled by missionaries, each of whom used a different writing system. As a result, there were many ways to write Navajo. In 1939, a standardized alphabet was designed, and during the following decade, a number of bilingual primers, children’s books, and a dictionary were published. The new standardized alphabet was not popular among the Navajos who did not trust the motives behind the literacy drive. In recent years, a revival of interest in the Navajo language and the development of Navajo computer fonts has made it easier to publish written materials in Navajo.The Navajo alphabet is given below with the letters presented in the traditional order.

Take a look at Article 1 of the Universal Declaration of Human Rights in Navajo.

The Navajo language was one of the keys to the U.S. victory in the Pacific . Early in the war, the Japanese began using English-speaking soldiers to intercept American communications. In response, the U.S. military began using codes so complex that it took hours to decode a message.

Philip Johnston, a World War I veteran and the son of a missionary, was raised on the Navajo reservation and spoke Navajo fluently. He came up with the idea of using the Navajo language, little known outside of the Navajo reservation, as a code. The Marine Corps followed Johnston’s suggestion and put out a call to the Navajo people. Twenty-nine Navajo men responded to the call and enlisted as radio operators in the Marine Corps in early 1942. Their efforts, and those of several hundred additional Navajo who enlisted subsequently, are credited with making possible US victory at Iwo Jima. The Navajo Code Talkers created messages by first translating Navajo words into English, then using the first letter of each English word to decipher the meaning. Because different Navajo words might be translated into different English words for the same letter, the messages were extremely difficult to decode. In fact, the Japanese were never able to crack the code. The code remained classified until 1968. Since then, the Code Talkers have been given long-overdue recognition. The Pentagon opened an exhibit honoring their role in 1992. The surviving 300 Code Talkers were awarded Congressional Silver Medals, and the original 29 Code Talkers were awarded Congressional Gold Medals. The Navajo Code Talkers Dictionary was declassified and is available on the Internet. You can also listen to interviews with the some of the surviving Navajo Code Talkers.

How difficult is it to learn Navajo?
There is no data on the difficulty of Navajo for speakers of English.