Uyghur ( Уйғурчә, ئۇيغۇر تىلى‎, Uyƣur tili, Уйғур тили), also known as Uighur, Uygur, Uigur, Weiwuer, is a member of the Turkic branch of the Altaic language family. It is spoken by 10.1 million people in Xinjiang Uyghur Autonomous Region in northwest China, also known as Chinese Turkestan, Eastern Turkistan, or Uyghuristan. It is also spoken by some 300,000 people in Kazakhstan. In addition, there are Uyghur-speaking communities in most countries of Central Asia, as well as in the United States and United Kingdom. The total population of Uyghur speakers around the world is estimated at 10.4 million people (Ethnologue).

In ancient times, the Uyghurs lived in an area of present-day Mongolia, where they had established a state which existed until 840 AD when it was defeated by Kyrgyz invaders. After their defeat, some Uyghurs moved to Ordos in northern China. They are believed to be the ancestors of Yugur, or Yellow Uyghurs, whose language is different from Uyghur. A much larger group of Uyghurs moved to Turfan in northeastern China, where they established another state which endured until the 15th century. These people spoke what is now the Turfan 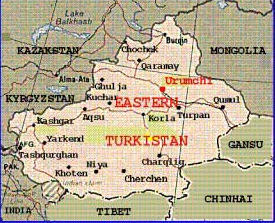 and Qashgar dialects of modern Uyghur.

Following the establishment of the Central Asian kingdom, the Chagatai Khanate, the term Uyghur gradually disappeared. The official language was Chagatai, an artificial literary language based on Uyghur and Uzbek. The term Uyghur reappeared in 1921 when it was officially re-eastablished as the name of the Uyghur people.

Standard Modern Uyghur differs from the Uyghur spoken before the establishment of the Chagatai Khanate. In the 19th century, large numbers of Uyghurs from different parts of Eastern Turkestan settled in areas along the Ili River. Their dialect arose from a mixture of the varieties spoken by the new settlers and the local Ili variety that played a dominant role in the formation of modern standard Uyghur.

Ethnologue identifies a number of varieties of Uyghur that are further broken down into subdialects.

Uyghur has 7-9 vowel phonemes, depending on the dialect. They can be either short or long. Vowel length makes a difference in word meaning.

Like most Turkic languages, Uyghur is characterized by vowel harmony, a type of phonological process that involves constraints on what vowels may be found near each other. There are two kinds of vowels — front vowels, which are produced at the front of the mouth, e.g., /i/, /e/, and back vowels, produced at the back of the mouth, e.g., /a/, /u/, /o/. Native Uyghur words can contain only all front or all back vowels, and all suffixes must conform to the vowel of the syllable preceding them in the word.

The table below shows the vowels of Uyghur.

Uyghur words are normally stressed on the final syllable.

Uyghur nouns are marked for the following categories:

Uyghur verbs agree with their subjects in person and number. Verbs have the following grammatical categories:

The normal word in Uyghur is order is Subject-Object-Verb, but other word orders can be used to mark topic and comment in the discourse. Adjectives precede the nouns they modify.

Below are a few common words and phrases in Uyghur.

Below are Uyghur numerals 1-10.

Over the course of its history, Uyghur was written with several scripts.

Take a look at Article 1 of the Universal Declaration of Human Rights in Uyghur.

How difficult is it to learn Uyghur?
There is no data on the difficulty of Uyghur for speakers of English.