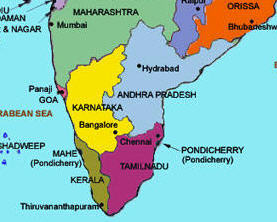 The Dravidian language family was first recognized as an independent family in 1816. The term Dravidian was introduced by Robert A. Caldwell in his Comparative Grammar of the Dravidian or South Indian Family of Languages (1856).

Dravidian languages are usually broken up into the following groups, largely based on their geographical distribution. The table below lists only languages with 60,000 or more speakers.

Tamil, Malayalam, Telugu, and Kannada are four of the 22 official languages and 14 regional languages of India. They are used in administration, education, business, and the media. All four possess a great wealth of written texts. All four have accommodated social, political, technical, and economic changes that occurred in 20th-century India.

The dialects of Dravidian languages have evolved along several dimensions:

Despite some differences, the sound systems of Dravidian languages share some common features.

Most Dravidian languages have five or more vowels that can be either long or short. Vowel length makes a difference in the meaning of otherwise identical words.

The consonant systems of Dravidian languages generally share these features:

Stress in Dravidian languages usually falls on the first syllable.

Telugu verbs consist of a root followed by suffixes expressing tense, mood, negation, causativity, person, number, and gender which follow each other in a prescribed sequence. In most Dravidian languages, verbs agree with their subjects in gender, number and person. Subject pronouns are normally dropped since the information about the subject is carried by the verb itself. Dravidian verbs have the following distinguishing features of verbs in most Dravidian languages. Not all languages have all of these features:

Below are numerals 1-10 in four major Dravidian languages in romanization.

Dravidian languages are written with syllabic alphabets in which all consonants have an inherent vowel. Diacritics, above, below, before or after consonants indicate change to a different vowel or suppression of the inherent vowel. When they appear the the beginning of a syllable, vowels are written as independent letters. When certain consonants occur together, special conjunct symbols are used which combine the parts of each letter.

Below are the names of four languages written in their native scripts.