Slovene (also called Slovenian or Slovenščina) belongs to the Western subgroup of the South Slavic branch of the Indo-European Language Family. Like all Slavic languages, Slovene has its roots in Proto-Slavic, the ancestral language from which all Slavic languages had evolved. According to Ethnologue, Slovene is spoken by 1.9 million people in the Republic of Slovenia. It is also spoken in Italy, Austria, Serbia, Croatia, and Bosnia-Herzegovina. There are 2.1 million speakers of Slovene worldwide.

Slovene is the official language of the Republic of Slovenia. It is used in all public, social, and private communication. There are numerous newspapers, periodicals, and books published in Slovene.

Slovene has a number of dialects, not all of them mutually intelligible. There are at least eight regional varieties. Among them are the following:

Slovene has 21 consonant phonemes. All voiced stops, fricatives and affricates are devoiced at the end of words, e.g., slab ‘weak’ is pronounced as [slap].

Like Bosnian, Croatian, and Serbian, Slovenian has a pitch accent. Long vowels can be either falling or rising, short vowels are typically falling.

Slovene is a richly inflected synthetic language with a grammar that is very similar to that of other Slavic languages. Grammatical categories are expressed as synthetic inflections added to the stems of nouns, adjectives, verbs, and most pronouns. All native Slovene stems are inflected, as well as most borrowings from other languages.

Slovene nouns are marked for gender, number, and case. The three are fused into one ending, as in all Slavic languages.

Most of Slovene vocabulary is derived from Proto-Slavic roots, shared by all Slavic languages. In the language has been influenced by a number of languages, most notably Serbian, Croatian, and German. In recent years, it has also borrowed a substantial number of words from English.

Below are a few common phrases in Slovenian.

Below are Slovene numbers 1-10.

The earliest known examples of a written 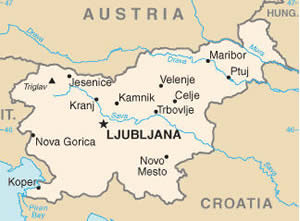 Slovene dialect in the Latin script date back to about 1090 AD. They are among the oldest surviving documents in any Slavic language. Today Slovene is written with a modified Latin alphabet consisting of 25 letters plus additional 6 letters (Qq, Ww, Xx, Yy, Ćć and Đđ) that are used only in foreign names and loanwords. Accent is not marked, unless it distinguishes otherwise identical words, e.g., gòl ‘naked’ and gól ‘goal.’

Take a look at Article 1 of the Universal Declaration of Human Rights in Slovene.

How difficult is it to learn Slovenian?
Slovenian is considered to be a Category II language in terms of difficulty for speakers of English.