Tachelhit (Shilha, Soussiya, Southern Shilha, Susiya, Tachilhit, Tashelheyt, Tashelhit, Tashilheet, Tashlhiyt, Tasoussit) belongs to the Northern Berber group of the Afro-Asiatic language family. Tachelhit is the Berber name of the language, while Shilha is the general Arabic term for Moroccan Berber languages. One of the most widely spoken Berber languages, 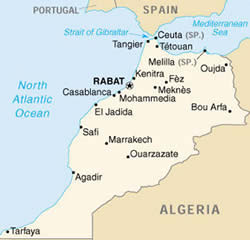 Tachelhit is spoken by 3.9 million people in primarily in Morocco, but also in Algeria and France (Ethnologue).

Tachelhit has no official status neither in Morocco nor in Algeria. Many male speakers are bilingual in Tachelhit and Arabic, while women tend to be monolingual and not speak Arabic.

The sound system of Tachelhit has a number of features that are common to other Berber languages.

Tachelhit has a very rich consonant system consisting of 32 phonemes, i.e., sounds that can differentiate word meaning. It has a number of unique features, some of which are detailed below.

Below is a chart of Tachelhit consonants from Wikipedia.

Nouns are marked for the following categories:

Most prepositions have a short and a long form. The long form is used with pronominal suffixes, while the short form is used in all other contexts, e.g. nniga-s ‘on top of him/her’, nnig- tgmmi ‘on top of the house’.

Below are a few basic words and phrases in Tachelhit.

Below are the numerals 1-10 in Tachelhit.

Written Tachelhit differs from the spoken one because it contains archaic usage, more Arabic loanwords than the spoken language, and often represents a mix of several varieties.Tachelhit literature written in the Arabic script has been produced since the second half of the 16th century. There is no standard orthography for writing Tachelhit. It is written in both Arabic script and Latin alphabets.There is a push to teach and write Tachelhit using the Neo-Tifinagh alphabet.

Do you know some English words that were borrowed from Tachelhit? Let us know and we’ll add them here!

How difficult is it to learn Tachelhit?
There is no data on the difficulty of Tachelhit for speakers of English.