Egyptian Arabic, also known as Egyptian Spoken Arabic, Masri, Massry, Normal Egyptian Arabic and Egyptian Colloquial Arabic, is a variety of Arabic which belongs to the Semitic branch of the Afro-Asiatic language family. It is spoken by 56,400,000 people in Egypt (Ethnologue). It also serves as a second language in many other countries of the Middle East, e.g., in Iraq, Israel, Jordan, Kuwait, Libya, Saudi Arabia, United Arab Emirates, and Yemen (Ethnologue). The total number of speakers of Egyptian Spoken Arabic is estimated to be upwards of 54 million (Ethnologue).

Prior to the Arab conquest of Egypt in the 7th century AD, the Egyptians spoke Coptic, a later phase of ancient Egyptian. Following the Arab conquest, there was a prolonged period of time when both Coptic and Arabic were spoken in Egypt. Egyptian Spoken Arabic, as distinct from Classical Arabic and the variety spoken by the Arab invaders, is thought to have developed in the first Islamic capital of Egypt, that is now part of Cairo, the capital of present-day Egypt. With increased influence of Islam and arabization of the country, Egyptian Spoken Arabic slowly replaced Coptic. However, there is evidence that Coptic continued to be spoken until the 17th century AD. Although Coptic today has no known first-language speakers, it continues to serve as the liturgical language of the Egyptian Coptic Church. 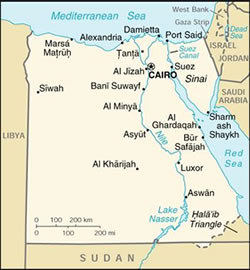 Egyptian Spoken Arabic is the language of wider communication and de facto national language of Egypt, although the official language of Egypt is Modern Standard Arabic (MSA). Egyptian Spoken Arabic is used in literature, including novels, plays, and poems, and in popular media such as in comics, advertising, some newspapers, and in transcriptions of popular songs. MSA is used in most other written media and in TV broadcasts. MSA is spoken on all formal occasions and for all formal purposes.

Egyptian Spoken Arabic is widely understood throughout the Arab world because Egypt has been a dominant force in film and in the media. Egypt developed the first Arab-speaking local film industry, and Egyptian films are widely distributed throughout the Arab world. The Egyptian film industry has created over 3,000 full-length films since 1924 and has earned the name of “Hollywood on the Nile.” As a result, Egyptian Spoken Arabic is usually chosen as the spoken dialect taught to students of Arabic as a foreign language.

There are several dialects of Egyptian Arabic that are traditionally divided into two major dialect groups.

Some of the other features of Egyptian Spoken Arabic vowels include the following:

There are some differences between MSA and Egyptian Spoken Arabic.

Some of the most salient features of Egyptian Spoken Arabic verbs are listed below. Most of them are shared with other Arabic varieties.

The usual word order in Egyptian Spoken Arabic is Subject-Verb-Object. The demonstratives this and that follow the nouns they modify. Wh– question words are not moved to the front of the sentence as in MSA, e.g., ráħ maṣri ʔimta? literally, ‘He went why?’

Like other varieties of Arabic, Egyptian Arabic derives most of its vocabulary by applying various vowel insertion patterns and templates to consonant roots. Watch the explanation of this process:

Egyptian Arabic tends to be more open to borrowing words from other languages than MSA. Throughout history, it has borrowed words from diverse sources. Earlier borrowings came from Coptic, the dominant language of Egypt prior to the arrival of the Arabs. These loan words dealt primarily with rural matters such as agriculture and traditional trades. A few Coptic expressions have survived in modern Egyptian Arabic. Later loanwords came from Greek, Italian, French, and English. At present, the primary source of borrowing is English. Watch the video below to hear some basic words and phrases.