Croatian (hrvatski jezik) belongs to the South Slavic group of the Slavic branch of the Indo-European language family. After the breakup of Yugoslavia, Serbo-Croatian, the common language of Serbs, Croats, Bosniaks, and Montenegrins, officially split into three mutually intelligible languages — Serbian, Croatian and Bosnian. Though the term ‘Serbo-Croatian’ went out of use with the dissolution of Yugoslavia, it continues to be controversial due to its historical, cultural, and political connotations and to the lack of precision in the definition of the term ‘language’. Suffice it to say that these three languages are largely artifacts of political, rather than linguistic decisions.

The eastern part of Yugoslavia, i.e., Serbia, Montenegro, and portions of Bosnia and Hercegovina, were religiously and culturally distinct from the western part of of the country, i.e., Croatia, and other portions of Bosnia and Hercegovina. Serbia was part of the Ottoman empire, while Croatia was under Austro-Hungarian rule. As a result, Serbian and Croatian are based on different dialects and are written with different alphabets. Serbian and Croatian became one language in the 19th century as part of an effort to create an independent South Slavic state (yug means ‘south’). 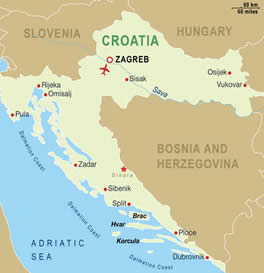 Although Serbian, Croatian, and Bosnian differ in a number of ways, these differences do not impede mutual intelligibility and, in fact, are not as great as the dialect differences within the languages themselves. This is not surprising since the continuous migrations of Slavic populations during the five hundred years of Turkish rule produced a patchwork of local dialects that cross more recently established national boundaries.

Standard Croatian is the official language of Croatia. It is spoken by 4.8 million people in Croatia in all areas of public and private life. It is also spoken in Austria, Bosnia and Herzegovina, Germany, Hungary, Italy, Slovakia, Slovenia, Australia, U.S., and Canada. Ethnologue estimates that about 4 million people worldwide speak Croatian in Croatia, and 5.5 million worldwide.

In 1967, Croatian scholars and writers issued the Declaration Concerning the Name and Status of the Literary Language, calling for wider use of Croatian in public life. In 1974, the Yugoslav constitution allowed each republic to identify its own official language. With the breakup of Yugoslavia in the 1990s, Croatian played a significant role in helping to establish Croatia’s identity as an independent state.

The dialect picture of Serbian, Croatian and Bosnian is quite complex and is shared by all three languages. The major dialectal difference is based on the pronunciation of the initial consonant in the word for what.

Shtokavian is spoken in Serbia, Bosnia and Hercegovina, Croatia, Montenegro, and the southern part of Austria. The primary subdivisions of Shtokavian are based on two principles: one is whether the subdialect is Old Shtokavian or Neo-Shtokavian, and different accents according to the way the old Slavic phoneme jat has changed. Linguists distinguish seven Shtokavian subdialects.

Croatian has 25 consonant phonemes, i.e., sounds that differentiate word meaning. The consonants of Croatian are given in the table below.

Like all Slavic languages, Croatian allows a variety of consonant clusters. These are either all voiced or all voiceless. The last consonant in the cluster determines whether the entire cluster is voiced or voiceless. This rule does not apply to nasals, laterals, or rhotics. The consonant /r/ can be syllable-forming, e.g., drvo ‘tree’.

Croatian has a pitch stress. Monosyllabic words always have a falling tone. Words with two or more syllables may also have a falling tone, but (with the exception of foreign borrowings and interjections) only on the first syllable. However, they may instead have a rising tone, on any syllable but the last. The final syllable is never stressed. Some loanwords may not have a standard placement of stress.

Croatian grammar is similar in complexity to the grammar of most other Slavic languages.

Croatian nouns are marked for gender, number, and case. The three are fused into one ending, as is the case in all Slavic languages.

The differences between Croatian on the one hand and Serbian and Bosnian on the other, are mostly lexical, even though the bulk of the vocabulary comes from a common Slavic stock. Croatian has preserved more native Slavic words, while Serbian, and to some extent Bosnian, have borrowed more from Russian and Western European languages. For instance, hile Serbian and Bosnian borrowed the names from Western European languages, Croatian uses inherently Slavic words, e.g., Serbian/Bosnian april and Croatian travanj, Serbian/Bosnian oktobar and Croatian listopad, literally ‘leaf fall’.

Below are some common phrases in Croatian.

Below are the numerals 1-10 in Croatian.

The original alphabet used by both the Serbs and Croats was Glagolitic. It was created by the monks Cyril and Methodius in the 9th century for Old Church Slavonic, the liturgical language of the time. In the Orthodox areas of Serbia and Bosnia, Glagolitic was replaced by the Cyrillic alphabet in the 12th century.

Croats in Croatia, and Bosniaks and Croats in Bosnia and Hercegovina use the Latin alphabet.

Take a look at Article 1 of the Universal Declaration of Human Rights in Croatian.