The Mayan language family is a group of 69 related languages spoken by some 6 million people in Central America. These languages are thought to have originated from a common ancestral language called Proto-Mayan which was spoken at least 5,000 years ago by inhabitants of the Mayan empire whose remains can be found throughout much of Guatemala, Belize, Honduras, El Salvador and southern Mexico.
The empire flourished for many hundreds of years from 1,500 BC, but collapsed during the period 800-900 AD.

Today, the largest populations of Maya speakers can be found in the Mexican states of Yucatán, Campeche, Quintana Roo, Tabasco, and Chiapas, and in the Central American countries of Belize, Guatemala, and the western portions of Honduras and El Salvador. 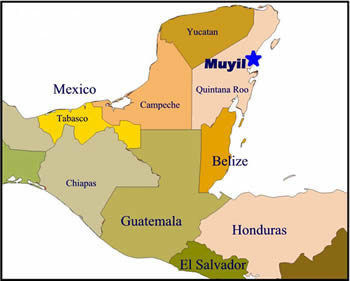 The Mayan language family is well-documented, and its classification is well-established and accepted by Mayanists. The subgrouping of languages within the Mayan family is based on common changes they had undergone when they split off from Proto-Mayan, the ancestor of all modern Mayan languages. For example languages of the western group all changed the Proto-Mayan phoneme */r/ (a reconstructed, not actually attested sound) to [j], some languages of the eastern branch retained [r], and others changed it to [ʧ] or [t].

The table below, based on Ethnologue, lists the main branches, their member languages, number of speakers, and geographical distribution. In recent years, the names of some Mayan languages have been changed in order to more accurately represent their pronunciations and to remove the Spanish spelling patterns imposed on their orthographies by earlier missionaries. The alternate spellings are given in parentheses.

Although Spanish is the official language of all Central American countries (except for Belize, where it is English), many Mayan languages are still spoken today as first or second languages by over six million indigenous people. Although still spoken by relatively large populations, Mayan languages show signs of language shift (i.e., replacement by Spanish) and decline because the children in many communities are no longer learning the language of their parents. At the same time, Mayas are participating in a language revitalization movement which will hopefully result in preventing further decline of these languages.

Below are some characteristic features of the sound systems of Mayan languages.

A few Mayan languages have tones, for example Yucatec Maya.

Mayan verb systems are quite complex. These systems evolved from ancestral Proto-Mayan which had seven tense/aspect/mood combinations

The basic vocabulary of Mayan language is Mayan in origin. However, all Mayan languages have borrowed from each other and from Spanish. Word-formation processes include the following:

Below are several basic words in four Mayan languages.

The pre-Columbian Maya civilization developed a writing system that represented the language of the Maya people as it was spoken at that time and known today as Classical Maya. The earliest Mayan inscriptions date back to the 1st century BC. The script was in continuous use up until shortly after the arrival of the Spanish conquistadors in the 16th century AD. Although many documents were written in Maya hieroglyphics at the time of the Spanish conquest of the Yucatán in the 16th century, they were destroyed by the conquistadors and priests. As a result, our knowledge of the ancient Maya is very fragmentary since of the thousands of books, only four have survived destruction. Knowledge of the writing system was lost, probably by the end of the 16th century. Renewed interest in it was sparked by published accounts of Maya ruins in the 19th century.

The decipherment of the Maya writing was a long and laborious process. 19th and early 20th century investigators managed to decode Maya numbers and portions of the text related to astronomy and the Maya calendar, but understanding of most of the rest long eluded scholars. While the decipherment of Maya hieroglyphs has been advancing rapidly in the past few decades, differing opinions as to whether or not Maya writing consisted of logographs (word-pictures) or of symbols representing sounds of the language. Finally, in the mid-twentieth century, Tatiana Proskouriakova, a Russian Mayanist, demonstrated that the Maya hieroglyphics were a fully functional system of close to 800 symbols, each representing a syllable consisting of a consonant and one of the five vowels:/i/, /e/, /a/, /o/, /u/.

Almost no literature in Mayan languages was written in the postcolonial period (after 1821), except by linguists and ethnographer who recorded oral Mayan literature. By and large, the Mayan peoples had remained largely illiterate in their native languages, some of them becoming literate in Spanish. Since the 1980’s, however, native language literacy has begun to spread and a number of indigenous writers have started a new tradition of writing in Mayan languages. Notable among this new generation is the K’iche’ poet Humberto Ak’ab’al, whose works are often published in dual-language Spanish/K’iche’ editions.

Today, Mayan languages are written with adapted versions of the Latin alphabet. Formerly spelling was generally based on Spanish, and it is only recently that standardized orthographic conventions have started to arise. The first widely-accepted orthographic standards were developed for Yucatec Maya in 1980. Subsequently, the Guatemalan Academy of Mayan Languages adapted these standards to other Mayan languages of Guatemala.

Take a look at the text of Article 1 of the Universal Declaration of Human Rights in three Mayan languages. As you can see, there are no similarities in the vocabulary. This is due to the fact that these languages have split from a common ancestor very long ago and have had little or no contact with each other.