The term Nahuatl (nawatlahtolli) covers a number of closely related languages that form the southernmost branch of the Uto-Aztecan language family. It serves as a general name for 27 linguistic variants (Ethnologue), some mutually unintelligible, that are spoken by over 1.6 million people in Mexico today. There are more speakers of Nahuatl than of any other indigenous language in Mexico today. The name Nahuatl means ‘something that sounds good’. The term sometimes also refers to Classical Nahuatl, the administrative language of the Aztec empire that served as a lingua franca in Central America from the 7th to the 16th century AD when the Spanish conquistadors arrived in the New World. 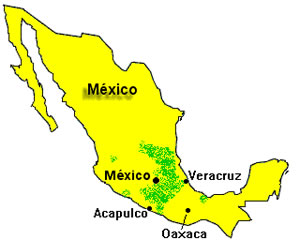 The Nahua peoples are thought to have originated in what is now the southwestern United States and northwestern Mexico, and to have split off from the other Uto-Aztecan peoples and migrated into central Mexico around 500 AD, eventually spreading and becoming the dominant people in central Mexico.

Of the 27 varieties of Nahuatl listed by Ethnologue, only twelve have more than 10,000 speakers, eleven varieties have only 1,000-9,000 speakers, and 3 varieties are already extinct. As is the case with other indigenous languages of Mexico, most speakers of Nahuatl are bilingual in Nahuatl and Spanish. In some towns, young people are not learning Nahuatl, while in other areas, majority of children entering school do not speak Spanish. In some areas, there are primary schools and even secondary schools taught in Nahuatl.

Linguists distinguish three basic divisions of Nahuatl languages, based on the fate of the Classical Nahuatl phoneme */tl/.

The phonemic inventories of the different Nahuatl varieties do not vary greatly. Nahuatl syllables usually consist of a single vowel, optionally preceded or followed by a single consonant. The most common type of syllable is Consonant + Vowel. Consonant clusters occur only because two consonants from two separate syllables run into each other. Nahuatl generally does not have diphthongs, so when two vowels are written together, they belong to different syllables and are pronounced separately.

The tables below show a standardized phonemic inventory based on the inventory of Classical Nahuatl. Many modern dialects lack some of these sounds or include others.

Nahuatl has four vowels which can be long or short. Vowel length makes a difference in word meaning, e.g., istaʔsalt’ and ista:ʔ ‘white.’ The distinction between long and short vowels may be disappearing in some varieties of the language. Different Nahuatl orthographies represent long vowels differently. Some use a colon, e.g., o:, some use a macron, e.g., ō, others write a double vowel, e.g., oo.

Listen » Samples of short and long vowels in Orizaba Nahuatl

Nahuatl varieties have a relatively small inventory of consonant phonemes. There are no voiced stops, fricatives, or affricates.

Stress in most Nahuatl varieties falls on the next-to-the-last (penultimate) syllable.

Nahuatl is a polysynthetic language, i.e., it adds different kinds of affixes (prefixes and/or suffixes) to roots to form very long words. These words function as whole sentences in languages such as English. For example, there is an 18-syllable word in Tetelcingo Nahuatl nehualmoyecastemojmolunijtzinutinemisquioni which means ‘You honorable people might have come along banging your noses so as to make them bleed, but in fact you didn’t.’ Click here to see how this long word was put together.

Nahuatl uses postpositions instead of prepositions (as in English). Among them are –tla(n), -pa(n), -ca(n), and -c(o), all of which mean something like ‘in’, or ‘at the place of’. This explains why many place names in Mexico end in one.

Nahuatl verbs are quite complex.

Some linguists argue that Nahuatl allows all possible orderings of Subject, Verb, and Object. Others think that Nahuatl has a basic verb-initial word order with extensive freedom for variation, which allows speakers to use word order for pragmatic purposes such as focus and topic.

The basic vocabulary of Nahuatl is Uto-Aztecan in nature. The language uses affixation to form new words, for example, it uses suffixes to derive nouns from verbs, e.g., miqui ‘to die’ + liztli ‘derivational suffix’ = miquiliztli ‘death.’ Modern Nahuatl has a large number of borrowings from Spanish, e.g., pwerta ‘door’ from Spanish puerta, porke ‘because’ from Spanish porque.

Below are Nahuatl numerals 1-10.

Nahuatl has the most extensive literature of all Native American languages. It includes a relatively large corpus of poetry and a theological dissertation called Nican Mopohua. At the time of the Spanish conquest, Aztec writing consisted mostly of pictographs supplemented by a few ideograms. When needed, it also used symbols to represent syllables. This writing system did not adequately represent the spoken language. After Spanish missionaries adapted the Roman script for writing Nahuatl, it was used to record a large body of Aztec prose and poetry, dictionaries and grammars. The missionaries produced many orthographic variants for writing Nahuatl, partly because they were recording different dialects, and partly because they were not trained linguists and did not know how to analyze and represent in writing Nahuatl sounds absent in Spanish. Today, the Mexican Ministry of Public Education has adopted a standardized alphabet for use in bilingual education programs.

Take a look at Article 1 of the Universal Declaration of Human Rights in Central Nahuatl.

Nahuatl has provided the English language with some words that came in second-hand from Spanish. Some of them are listed below.

How difficult is it to learn Nahuatl?
There is no data on the difficulty of Nahuatl for speakers of English.