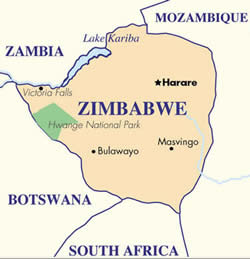 Shona is an official language of Zimbabwe, along with Ndebele and English. English is used as a lingua franca by those who speak mutually unintelligible languages. It is the de facto national working language of the country. Although Shona is taught in schools, it is generally not the medium of instruction beyond the primary level which is English. There are many newspapers in Shona, and it is also used on the radio.

There are three main dialects of Shona. There is a considerable degree of variation within each dialect involving pronunciation, grammar, and vocabulary. Most dialects are partially intelligible and share most of their vocabulary.

Modern Shona is based on the Karanga dialect of Masvingo Province and the Zezuru dialect of central and northern Zimbabwe.

Shona has a simple vocalic and a complex system of consonants that includes sounds rarely found in other languages. All Shona syllables end in a vowel.

Shona’s consonant system is characterized by the presence of breathy and whistled sounds.

Tone is important in Shona since it is used to distinguish between otherwise identical words and to mark grammatical functions.

A major feature of Shona is classification of nouns into various classes and an elaborate verb system.

Shona nouns belong to different classes. This is typical of all Bantu languages.

As is common in Bantu languages, Shona verbs are highly agglutinating. Below are some of their main features:

The basic word order in Shona is Subject-Verb-Object. Modifiers follow the nouns they modify.

Below are a few words and phrases in Shona.

Below are Shona numerals 1-10.

Shona is an established written language with a highly developed literature. It has a standardized orthography based on the Latin script which was adopted in 1967 after years of negotiation. The script contains 35 symbols. The sound values of the letters depend on the dialect. The alphabet does not represent some sounds that occur in some of the dialects, e.g., there is no symbol for the sounds /l/ and /x/ that are found in some dialects. There is no symbol for breathy /g/ and /r/. Tones are usually not represented in writing.

Take a look at Article 1 of the Universal Declaration of Human Rights in Shona.

Use of hands in Shona

How difficult is it to learn Shona?
There is no data on the difficulty of Shona for speakers of English.