Guaraní (avañe’ẽ) belongs to the Tupi-Guaraní family of South America. It is spoken by 4.6 million people in Paraguay, Argentina, Bolivia, and Brazil (Ethnologue). These languages are spoken by people who inhabit a vast area in the Amazon forest in Brazilian states and Paraguay in the south, and from the Atlantic coast in the east to the Andes of Bolivia and Peru in the west. Despite their geographical spread, the differences between the languages is relatively small, making it possible for the Portuguese Jesuits to develop a língua geral ‘common language’ which could be understood by everyone. The history and meaning of the name Guarani is a subject of dispute due to lack of historical records. Prior to the arrival of Spanish conquistadors, the Guarani people referred to themselves as Aba ‘men’. The term Guaraní was originally applied by early Jesuit missionaries to refer to natives who had accepted conversion to Christianity. 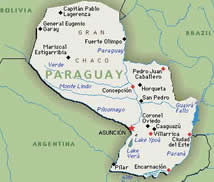 All syllables in Guaraní consist either of a vowel or a consonant plus a vowel. Guaraní words are either oral or nasal — a phenomenon called nasal harmony. A Guaraní word is nasal if it has at least one of the nasal vowels or consonants /ĩ, ẽ, ɨ᷀, ã, ũ, õ, ᵐb, ⁿt, ⁿd, ᵑg, m, n, ɲ, ŋ/ in its stem. Nasal harmony influences the choice of prefixes, and to a certain extent, enclitics. For example, the postpositions pe, ta turn into me, nda after nasal words.

Guaraní has six oral vowels. All vowels have nasal counterparts. In the table below, nasal vowels are marked with a tilde.

The consonants of Guaraní are given below. Guaraní syllables consist of a vowel or a consonant plus a vowel. There are no consonant clusters.

Guarani is an agglutinative polysynthetic language. The term polysynthetic refers to languages that have a high ratio of morphemes per word and which typically permit noun incorporation. A word in a polysynthetic language can express a meaning which would require a sentence in many other languages. Guaraní uses postpositions instead of prepositions, e.g., Paraguay pe ‘in Paraguay’.

Guaraní has a complex verbal system.

The normal word order in Guaraní is Subject- Verb-Object. If the subject is not specified, the word order is Object-Verb.

Below are a few basic words and phrases in Guaraní.

Guaraní numerals 1-10 are given below.

Guaraní became a written language relatively recently. Prior to the Spanish conquest of the Americas, the language did not have a writing system. The first written texts in Guaraní were written by Jesuit missionaries who used the Latin alphabet to represent the language. The first Guaraní-Spanish dictionary was printed in 1639, and the first grammar in 1722. The script was standardized in 1950, although some disagreement about some of the letters still persist. The modern Guaraní alphabet is an adapted version of the Roman alphabet. Its orthography is largely phonemic (i.e., each letter represents a phoneme, a sound capable of differentiating word meaning). Tilde is used to mark nasalization of vowels, while ‘ represents a glottal stop.

Take a look at f Article 1 of the Universal Declaration of Human Rights in Guaraní.

English has borrowed a number of words from Guaraní (via Portuguese). Among them are the following:

How difficult is it to learn Guarani?
There is no data on the difficulty of Guarani for speakers of English.